all photos contributed by Jay Saper

Wherever Shatzi Weisberger went throughout New York City, the rainbow flag affixed to her walker fluttered in the wind alongside her. From Dyke March, to Black Lives Matter uprisings, the nonagenarian was a fixture at street demonstrations, attracting throngs of admirers and inspiring generations of activists who knew her as the legendary People’s Bubbie. 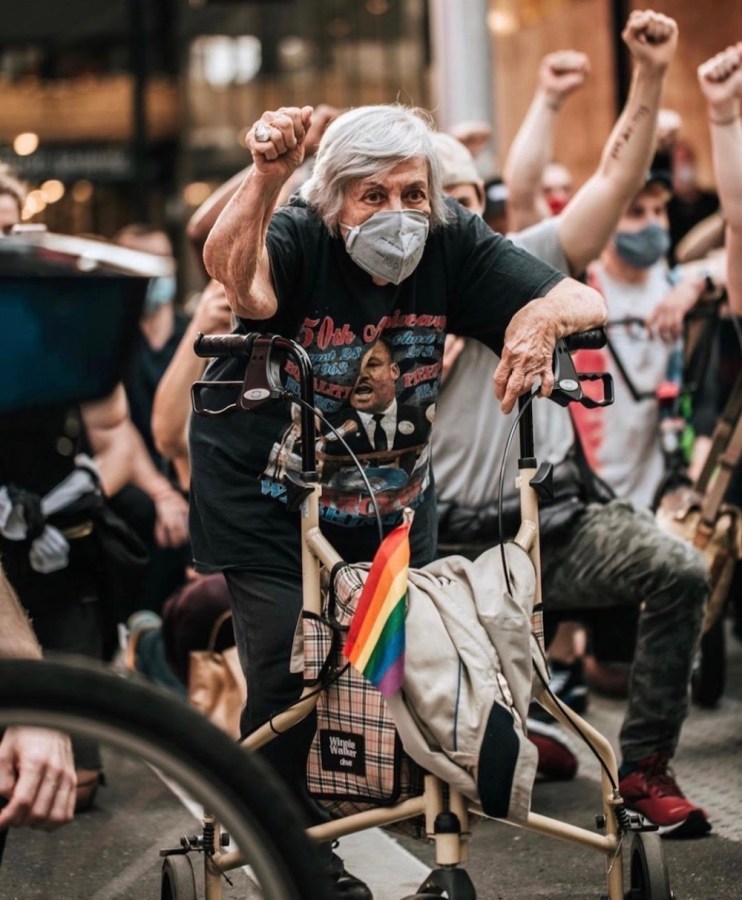 Shatzi Weisberger, known as The People’s Bubbie, at one of the 2020 Black Lives Matter uprisings

As a trans anti-Zionist Jew, I am indebted to the trailblazing work of Shatzi, a proud lesbian, who made people like me possible. For the final five years of her life, I had the great joy of becoming part of Shatzi’s beloved chosen family, a group of mostly young queer and trans Jews who encircled her with love and provided her the crescendo of a lifetime: excursions to Riis Beech, pina coladas on Queer Pier, and protests, protests, protests.

“I’ve never felt so much love in my life,” she said, gleaming her famous smile, “It’s amazing!” 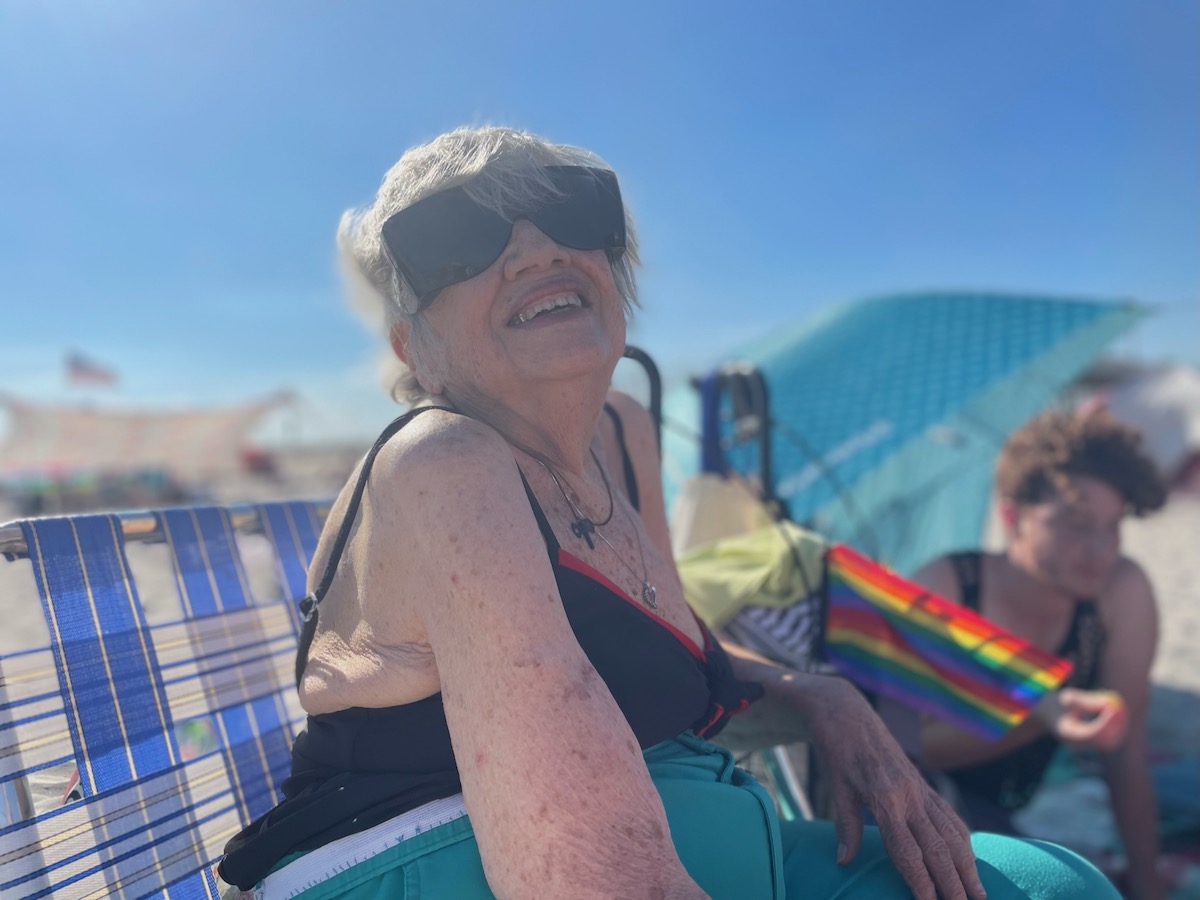 Shatzi at Riis Beach, where she was a fixture

Shatzi died on December 1, 2022, at the age of 92, facing her death as she lived her life, with an open heart and compassionate soul, ever unafraid to embrace the unpopular.

The lifelong nurse and activist became a death educator in her later years, hosting workshops on the art of dying, challenging a death phobic culture, and promoting honest conversations about the uncomfortable moment that we all must meet one day.

Shatzi planned her own FUN-eral in 2018, which was reported on by the New York Times. At what she considered her death party, friends decorated a biodegradable coffin while they were serenaded by socially relevant songs sung by the Brooklyn Women’s Chorus, where she sang.

In addition to organizing this celebration, Shatzi meticulously planned for the care she would receive in her final moments. Every object in her home had a nametag with the person she bequeathed it to. She selected the friends who would wash her body before her natural burial and asked me to write these words of tribute to her life. 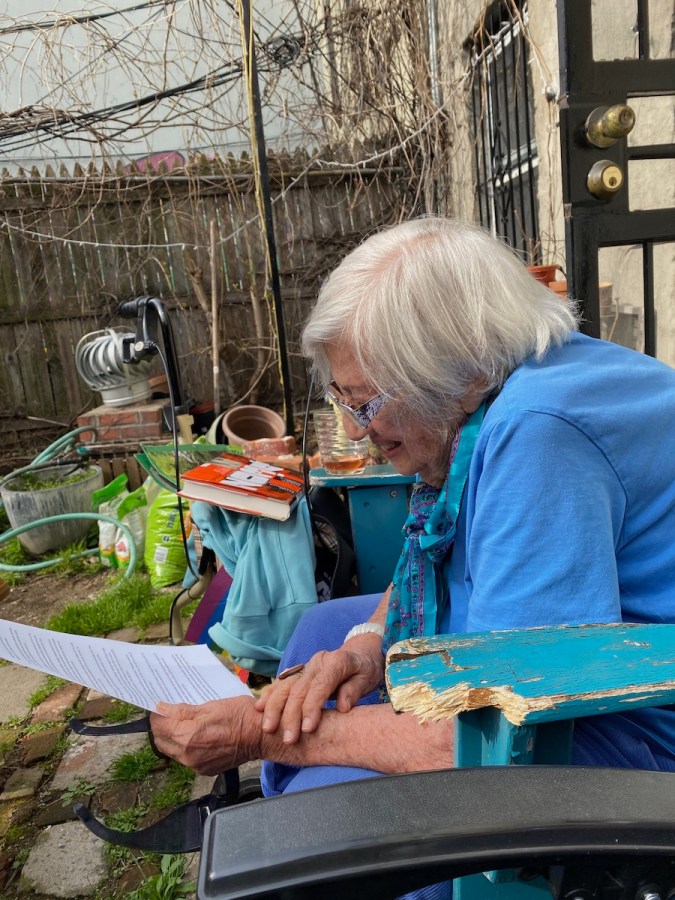 In her final weeks, loved ones visited Shatzi in her Upper West Side apartment around the clock, serenading her with her favorite k.d. lang songs. Documentary film crews and journalists showed up to her bedside. Shatzi’s chosen family collectively raised the funds for her end of life care and social worker friends fiercely advocated, amidst a broken healthcare system, to get her in home hospice, so could die as she always wanted, at home, in her own bed, surrounded by love.

“You are courageous, committed, and caring,” Shatzi’s friend Elena Stein told her shortly before she took her final breaths. 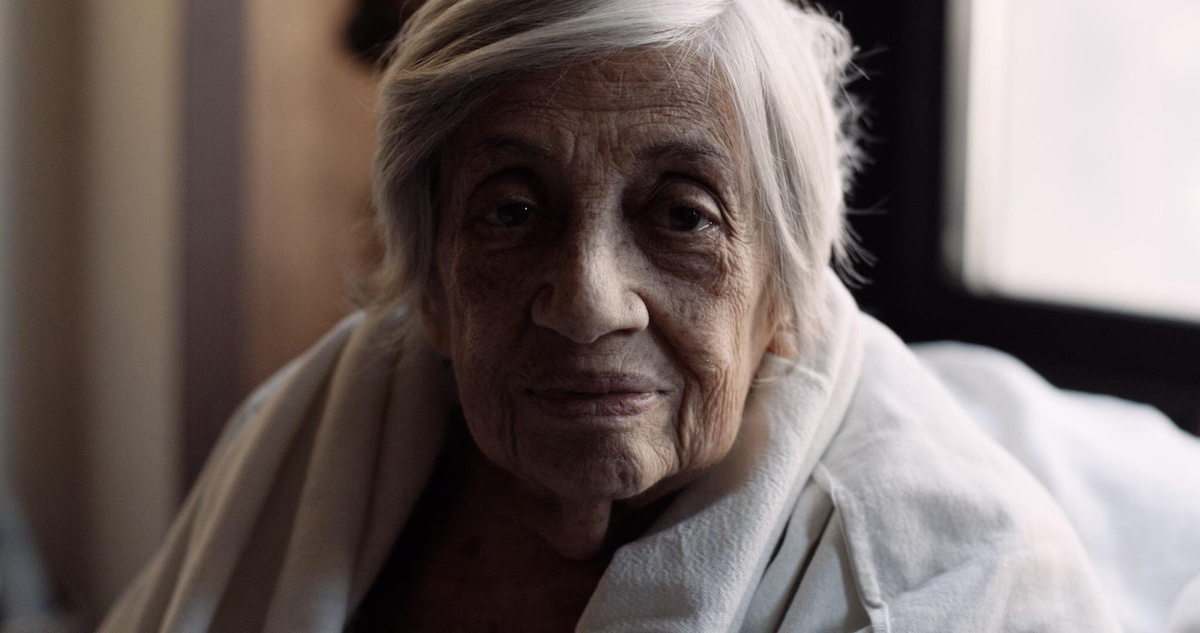 Shatzi at home in her Upper West Side apartment

As unconventional as Shatzi was in death, she was also a trailblazer in life. She attributed her rebel spirit to being the great-granddaughter of Samuel Gompers, the founder of the American Federation of Labor.

Born Joyce Schatzberg on June 17, 1930, Shatzi grew up in a Jewish household with a lesbian mother, who would go on to serve as grand marshal of Pride. From a young age, Shatzi began organizing against racist redlining practices on Long Island.

After reading Betty Friedan’s The Feminine Mystique, Shatzi ended an unhappy marriage and gravitated toward lesbian political and social community. In the 1970s, she helped to found Radical Jewish Lesbians Organizing and Dykes Opposed to Nuclear Technology (DONT). She faced arrest for her organizing efforts, which preceded the nuclear meltdown at Three Mile Island.

“We all lay on the ground as if there had been a nuclear attack,” Shatzi recalled of a particular action. “And I remember crying because I felt that I was in the right place at the right time doing the right thing with the right people.” 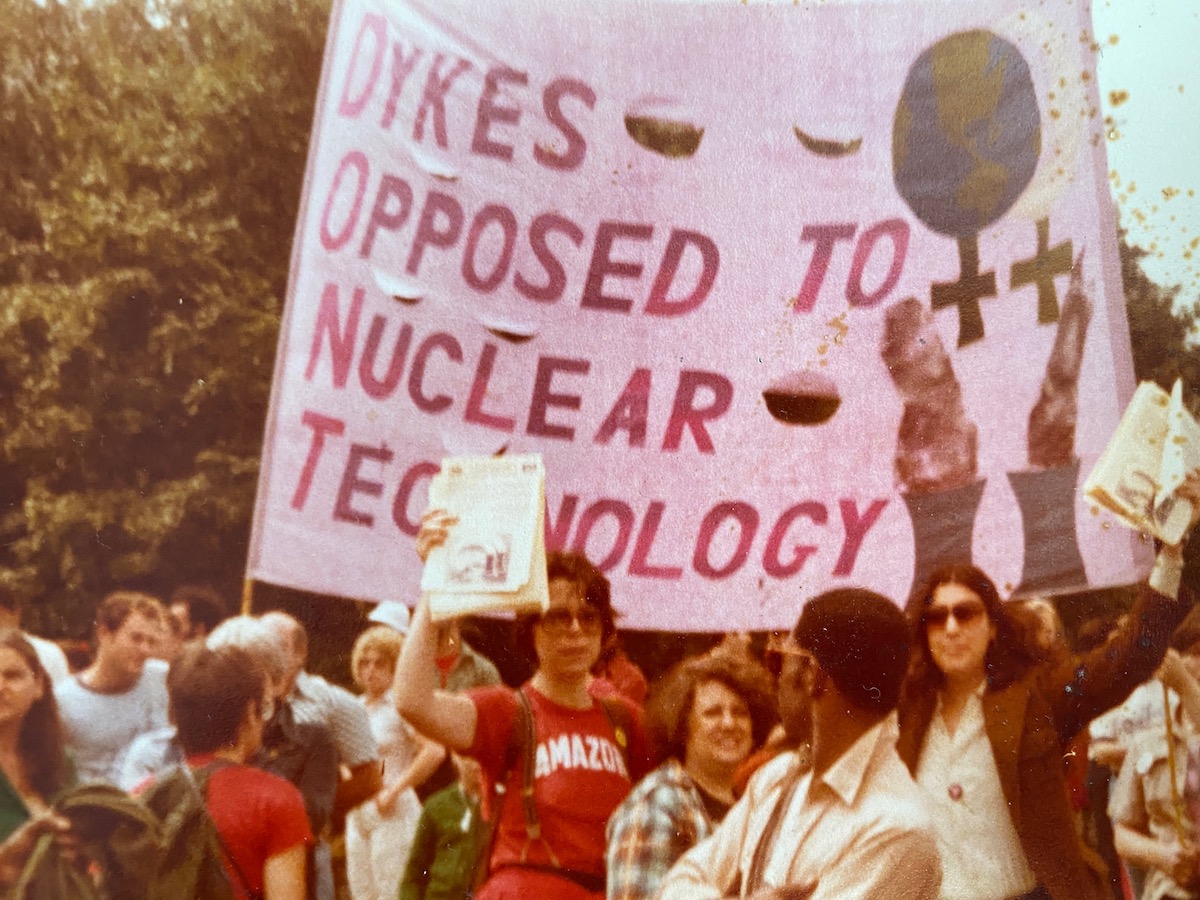 Shatzi at a Dykes Opposed to Nuclear Technology demonstration

During the 1980s, Weisberger joined the AIDS Coalition To Unleash Power, known as ACT UP. A lifelong nurse, she made home visits to care for people with AIDS.

Fed up with conventional political parties that seemed to neglect the communities closest to her heart, Weisberger tirelessly trotted a clipboard to community colleges throughout New York state, encouraging students to become independents.

As the prison population ballooned, giving rise to mass incarceration, Shatzi elevated the voices of people behind bars who criticized the racist policies tearing loved ones away from their communities. From the sidewalks of New York City she distributed No More Cages, one of the first publications of what became known as the prison abolition movement. 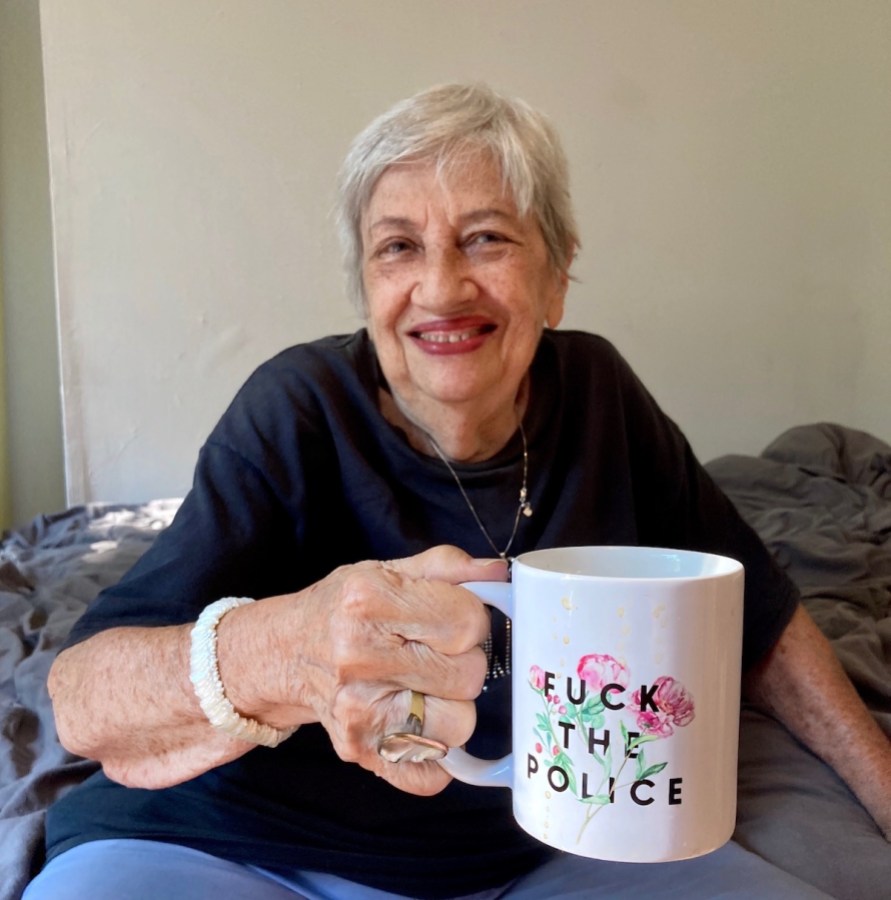 Shatzi drinking from a Fuck the Police mug

Shatzi was a proud Jewish lesbian who fiercely advocated for Palestinian freedom. She held workshops on Palestine solidarity at the Michigan Womyn’s Music Festival and worked with Rabab Abdulhadi as part of the Palestinian Defense Committee.

For the latter part of her life, Shatzi delighted in the company of her beloved cat Rosa and Jewish Voice for Peace became her political home. Shatzi was a key member of the organization’s Bubbie Brigade, a political street theater group of elderly Jewish women. At one demonstration she handed out challah while holding a sign reading, “Jewish dyke standing with Palestinian queers.” 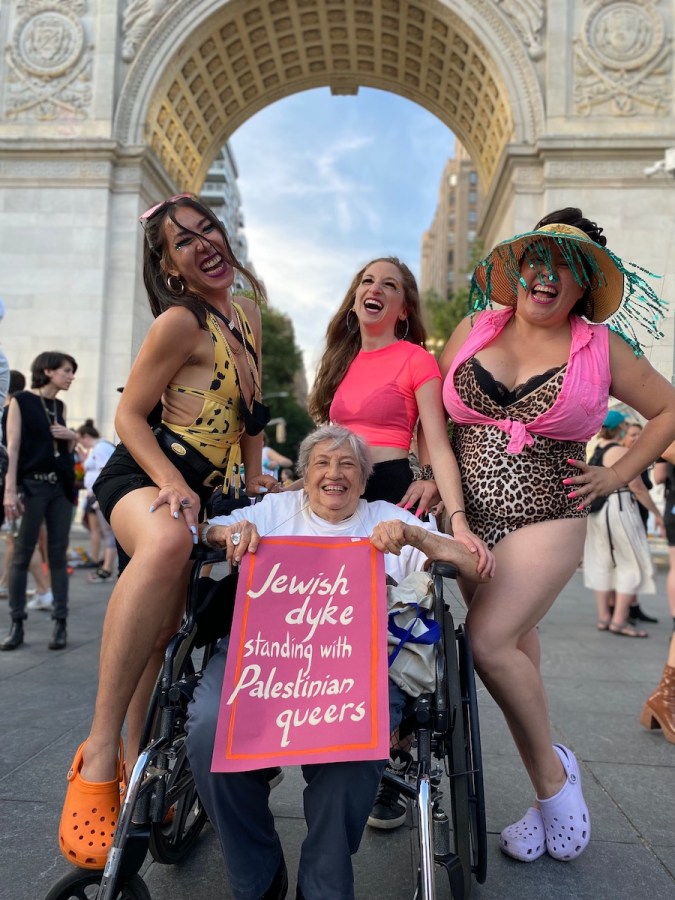 When uprisings against police violence blossomed in the wake of the murders of Breonna Taylor and George Floyd in 2020, Shatzi attached her Black Lives Matter sign to her walker, and wheeled out into the streets to join the protests, proudly becoming the oldest New Yorker to break the mayor’s repressive curfew.

As Shatzi continued to show up at demonstrations, day after day fighting for justice, she became known as the People’s Bubbie, a nod to the affectionate Yiddish term for grandmother, which would soon become her popular Twitter handle. Shatzi was eager to leverage the attention she received to support the movement, writing for the Huffington Post, “All I Want For My 90th Birthday Is To Abolish The Police And Build Our Dream World.” 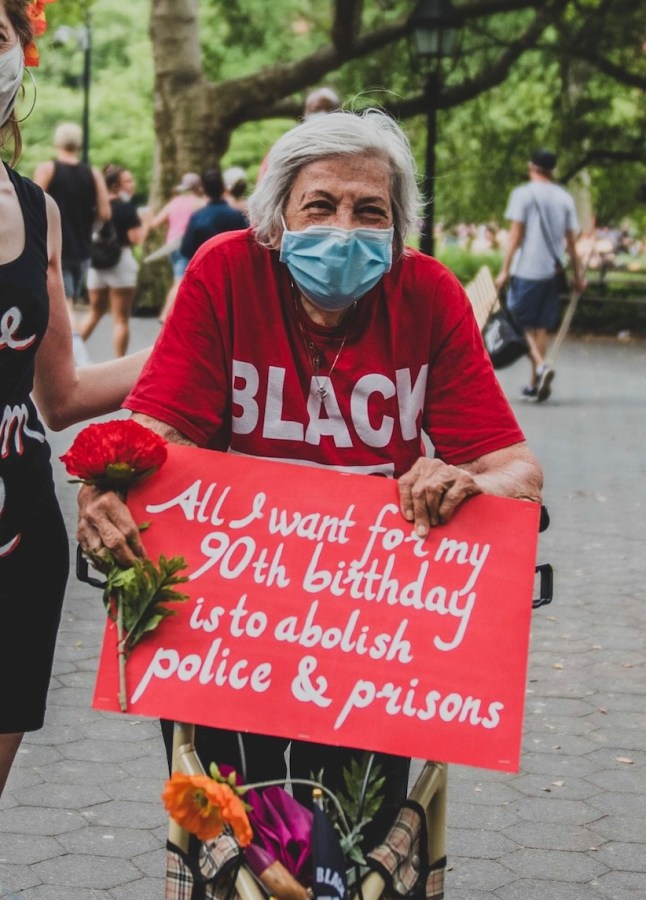 Like many queer people, Shatzi had a complicated relationship with her family. She described being kidnapped by her father when she was five years old after her mother came out as a lesbian. Because of her father’s pervasive homophobia, Shatzi grew up in the foster system.

Shatzi married Gene Weisberger in 1951. The couple adopted Jack, at 5 years old from Greece, and a year later, Sabina, a newborn from California. After 18 years of marriage, Shatzi left her husband to seek out the lesbian community she longed for.

Shatzi built a deeply loving intergenerational queer chosen family that surrounded her in life and is working to honor her legacy in death. She is also survived by grandchildren Dave, Melissa, and Amanda Hamilton, and Jennifer, Devon, and Jake Weisberger, as well as great-grandchildren Slater and Indy Hamilton.

The streets of New York City will never be the same without her, however, those who dream of building a better world will forever carry the treasure of knowing Shatzi Weisberger in our hearts. 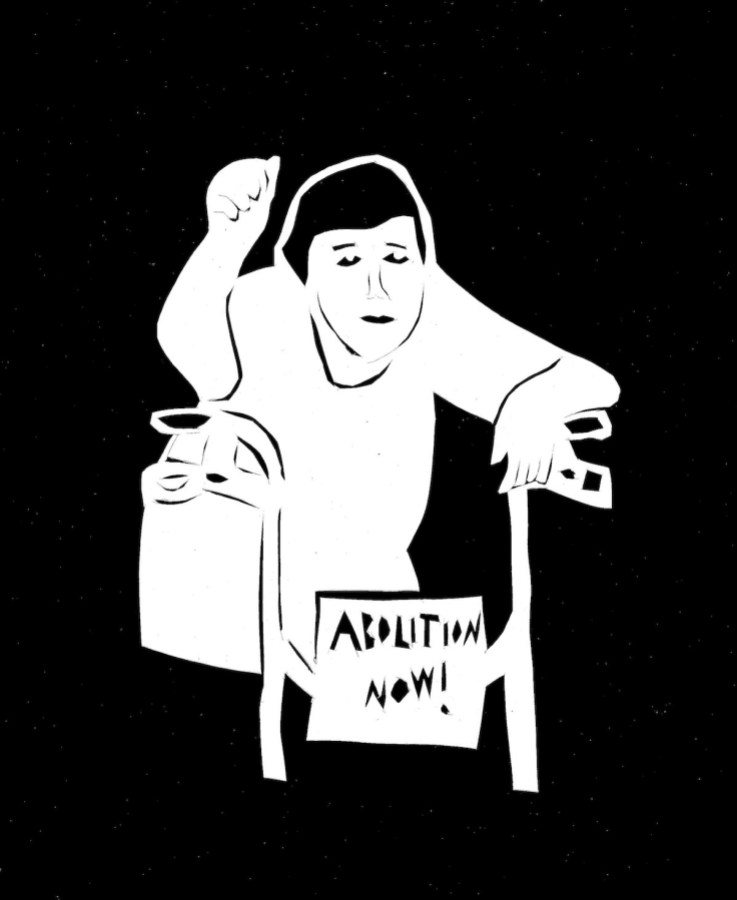 Jay Saper is a trans anti-Zionist Jewish artist, translator, and organizer who lives in Brooklyn, New York. They are co-editor of Questions to Ask Before Your Bat Mitzvah (Wendy’s Subway 2023).

Jay has written 1 article for us.