So I was going to write about my experience at New York Tech Day this week, as I spent the majority of Thursday there. But that will have to wait until next week, as there’s been a “drop everything” moment, a “stop the presses” moment. Some tech news dropped that is so in my wheelhouse that that I couldn’t possibly talk about anything else.

As of this week, Fallen London has an iOS app.

Y’all know how much I love and write about Fallen London. I’m even in contact with a bunch you on there. Our community embraced Fallen London for its steampunk fantasy aesthetic combined with its non-binary gender choices and its “You Do You” attitude toward homosexual relationships (you can be gay, bi, pan WHATEVER THE FUCK YOU WANT it’s grand). So many of us have stayed with it because we’re, at our hearts, readers—this is a text-based game that reads like an intricate Choose Your Own Adventure novel, but with the possibility of failing tasks that make it much more interesting, suspenseful and, dare I say, delicious.

I knew Failbetter Games was planning a Fallen London app. I even knew they were close because they Tweeted about waiting for app store approval. And yet I was still surprised when it hit—probably that says more about how much of a hot mess I am right now than anything else. I even forgot to tell fellow Autostraddle contributor Liz Rubin about it. She had to stumble upon it herself! When she heard I was going to write it up, she texted me: “You can quote me as saying, ‘Well there goes being a doctor, I guess I’ll just do this forever instead.’” And as I lay in bed, in the dark with my headphones in, immersed in the Neath, I had to agree with her. Forget about my novel, forget about my jobs, forget about graduation. This is so, so good.

For those who haven’t played before, the premise of Fallen London is exactly as it sounds London has fallen miles under the earth’s surface. As such, you’re not only dealing with fellow human Londoners as you make choices and gain experience and items that unlock various quests and stories—you’re also interacting with devils, rubbery men and people for whom death is not a permanent condition. But be careful as you explore! Your actions have consequences and, in a strange world full of mystery and so close to Hell, your nightmares may become too much for you to handle or your scandalous actions may get you temporarily shipped away. The app includes a smooth on-boarding process for new players, so no need to sign onto a computer first.

For returning players whose interest may have lapsed for a time, Failbetter has made a really smart decision to allow you to replay certain aspects of your storyline. When you sign into the app, they’ll ask you what you last remember about your Watchful, Persuasive, Dangerous and Shadowy storylines. While you can’t skip ahead, you can go back to refresh your memory without beginning again entirely. Personally I chose to continue forward without replaying—I was so far along in my scholarship of the correspondence and was about to get an invitation to the University, so I just had to continue.

While the app syncs with the Fallen London web app, the experience feels a ton different. First off, any game you put in your hand instead of on a computer screen feels a load more personal. The text based gameplay feels a lot more natural on a phone than it does on a computer; the feel is reminiscent of Lifeline, actually, with the game whispering to you in the form of the written word—occasionally results will move about on the screen if it’s appropriate for them to do so. They’ve also added music by the same composer who did the Sunless Sea soundtrack. Popping your headphones in creates a much more immersive experience, like pairing your favorite book with music that matches it tonally. The score is both calming and disjointed at once matching the quirky, tongue-in-cheek writing swimmingly. Plus the portable phone experience makes this game easier to fit into your life—mobile support has made it a can’t-sleep app or a don’t-want-to-get-out-of-bed-quite-yet app or even a my-boss-thinks-I’m-actually-pooping-in-this-bathroom app. And it’s a good deal more intelligent and rewarding than other such games (you could replace midnight Candy Crush with this).

They’ve also added new content—I even tried a new storyline called “A Flash Lay” where you con a dealer of souls into giving you a handy cache of his goods. There also seems to be a lot more suggestion of what I consider to be fantasy’s best attribute—the use of the distance a made-up world provides to facilitate exploration of real world moral and ethical issues. Perhaps I didn’t notice it before or I wasn’t far enough along, but there seems to be a lot more writing—even in the loading text—about what the Revolutionaries are revolting against. It just goes to show that the gameplay isn’t the only thing Failbetter continues to push and maintain. The content and world are growing, too.

There are a few things I wish were stronger about the app. As of right now, it takes FOREVER to load, far longer than a mostly-text-based game should. Their FAQ says they were gunning for offline playability, but I tried to play while riding the subway to test that and it got hung up on syncing my character, because you can’t choose when you sync. And speaking of that, if you need the app to sync to the web app, there’s no way that I can find to force the sync other than forcing the app to quit and then waiting that really long load time again. I feel like all of these will get sorted out as they scale out for both the massive player renaissance and the influx of new players, but it’s a thing to know about. Still a few bumps in the road. My one big feature request is the option to enlarge the text—the immersive, personal mobile experience would be so much stronger if I wasn’t squinting at the words.

The app is free to download and, as always, Fallen London is free to play. But the free edition only gets you twenty actions at a time. I consider this a godsend, this limit, or I’d never get anything done. However, you can become an Exceptional Friend to Fallen London for $7 a month. This gets you forty actions at a time, 10 opportunity cards at once, plus access to the House of Chimes and a rotating storyline therein. While the app mobile app is only on iOS for now, they’ve released a form for Android users to gauge interest/let you know if there’s any news on the Android front. For now, if you lack an iOS device, you can always join in the fun on the web app. See you all there, delicious friends.

And now for something completely different. A few weeks ago, I wrote an article about my concerns with the hegemony of the tech industry specifically as it relates to the burgeoning sphere of virtual reality. I’ve been banging the drum forever on getting more queer women and non-binary folks into tech — generally, the more representative the creators of a product are of the wide scope of end users, the better the product will be. I’ve decided whenever I get something that sounds like a really cool opportunity but doesn’t quite warrant a post of it’s own (or at least, not yet), I’m going to post it at the bottom of the Queer Your Tech for that week so you don’t miss out. These are specifically for queer women and non-binary folks who are looking for careers or to advance their careers in the tech-o-sphere. I’ve got a bunch I’m going through from NY TechDay, but this week we’ve got a special announcement:

Lesbians Who Tech just launched their Kickstarter for the Edie Windsor Coding Scholarship Fund. They plan to assist in paying queer women’s tuition to coding bootcamps and hacker schools. They’ve run a pilot version of it already, so they already know it can work. Fund it now, y’all who can, so that when their announcement comes out about the application process for their 2016 scholars, I can post that here and we can send some queermo geniuses into the tech work force. From the Kickstarter: 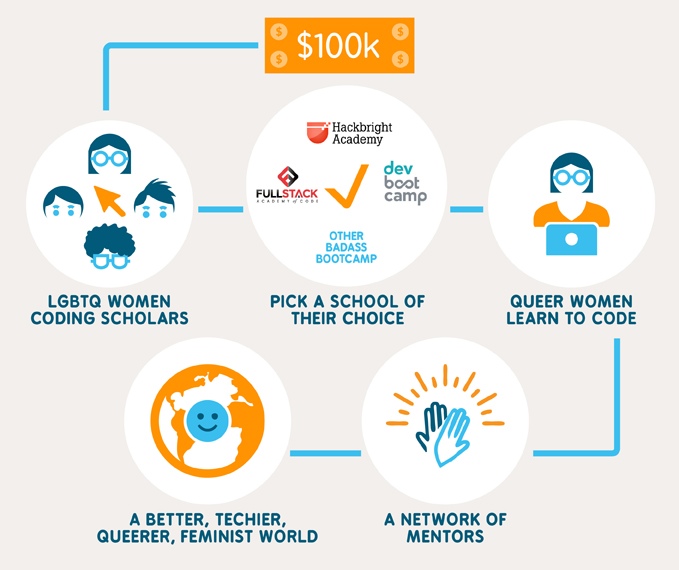