On August 14th, 2014, I cried myself to sleep after finding out that the wifey of my dreams (and almost as importantly, a WNBA player) Brittney Griner officially got engaged to her beautiful and swoon-worthy WNBA player girlfriend Glory Johnson. Gone were my plans of sweeping her off her feet and slithering into the rainbow horizon on that giant-ass snake she charmed in 2013. I mourned for five months until the greatest news appeared on my social media: Brittney Griner and Glory Johnson are to appear on TLC’s “Say Yes to the Dress.” I know this is a gesture from my bae Brittney so that I can live vicariously through her and Glory. Brittney did this for all of us bleeding heart dykes. (But mostly she did it for me.) 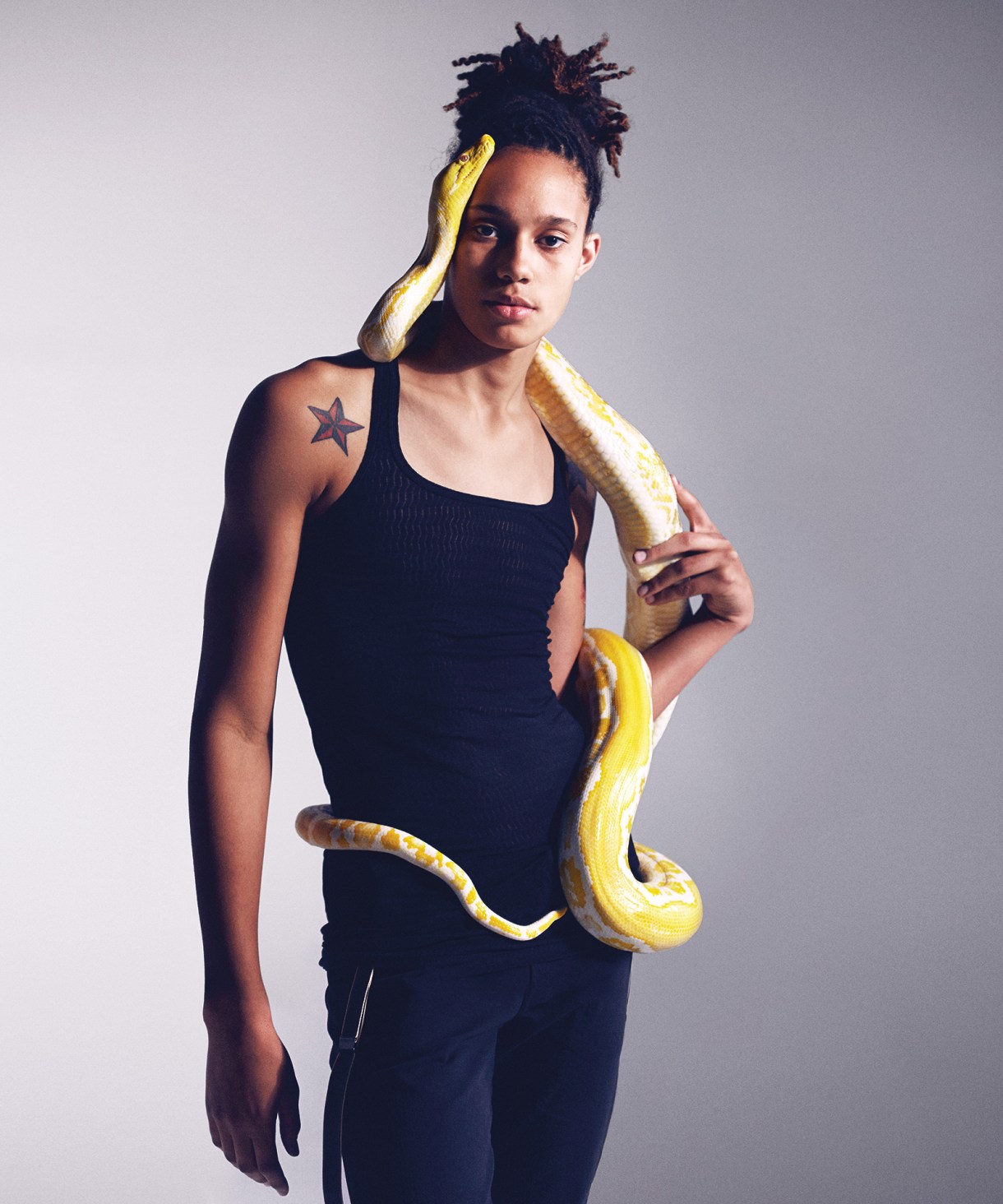 via AZ Central
We could’ve had it aaaaaaaaall. Riding on this snaaaaaake

For any and all who may not know, Say Yes to the Dress (SYTTD) is a show on TLC that follows people who are planning their wedding day and need to find their gown. This show is 20 minutes of stress and terror as this poor individual scrutinizes potential wedding attire and has her support systems evaluate and judge the quality of her choices. Although SYTTD is incredibly hetero-normative and hetero-patriarchal, it has been a really interesting platform for the visibility of queer women on television and narratives about marriage. Say Yes to the Dress is one of the few programs that captures the similarities and differences for all kinds of people preparing to tie the knot in this one snapshot of the traditional matrimonial process; its portrayal of queer women gives viewers the opportunity to see images of queer love in a “normalized” way, while giving us a glimpse into the uniqueness of same-sex relationships. So, whether you’re a giant fluff ball of wedding romance or are actually kinda disturbed/confused by the concept of marriage (like me, if I’m being honest), this shit can be pretty heartwarming.

In honor of Brittney Griner and Glory Johnson’s imminent SYTTD debut, let’s celebrate some lovely moments of lady gays past.

Erica and Devin were one of the first queer couples on SYTTD, making their debut in season five, episode four (“Going Bridal”). A great component of their episode was that not only did we get to see queer women preparing to say “I do,” but we got to see two feminine of center women in an interracial relationship loving one another. TLC understands what I need.

The two brides both found dresses, which is the happiest way this show can end. What I like a lot about their television moment is that they broke that rule the superstitious notion that you can’t see your spouse before your wedding day. The staff were surprised, but what kind of lady gay moment would it be if someone wasn’t pushed out of their comfort zone? 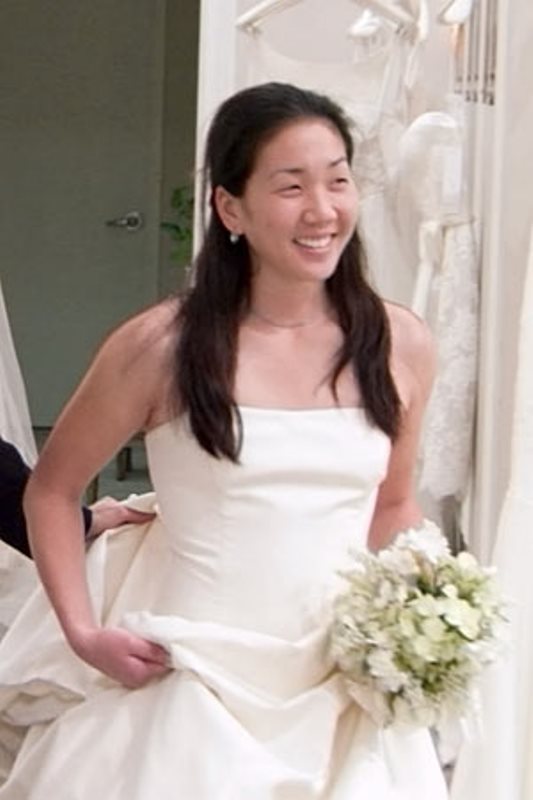 via The Fab Femme 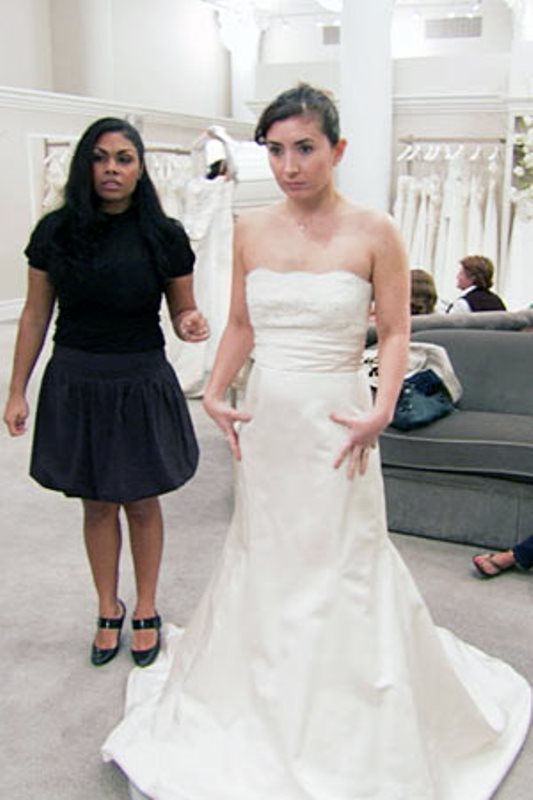 via The Fab Femme

Season ten, episode thirteen of SYTTD featured Queen Precious Jewel Earth. Queen is a young woman marrying her partner of five years, Jaqueline (or J). Queen explains in the episode how important it is for her to marry her partner in spite of the fact that their union won’t be recognized unilaterally across the nation. “We’ll be married on paper in New York, and married spiritually in front of our friends and family in North Carolina,” she explains. I loved watching Queen search for the dress that would best compliment her as her mother and best friend supported her. As a gay Black woman, the support of other Black women has deep meaning for me and I couldn’t help but get teary as I saw Queen’s mother watch in awe of her child.

While this episode got me feeling some type of way, it also pissed me the hell off. SYTTD is terrible at treating fat women with respect. Queen explains that she underwent gastric bypass surgery two weeks before her fitting, and that she is en route to losing 100 pounds. The stylists spent her entire segment either whining about how long her name is or worrying that they wouldn’t have a dress big enough for Queen. The sizeism in this show can be really unsettling and heartbreaking; if marriage and a dazzling white gown is what someone wants to invest their money in, they should be able to get that no matter how skinny or fat they are. Even if the stylists were concerned that their store only catered to bodies the conform to Eurocentric standards of beauty, their grievance should have been directed at the fact that wedding gown sizes enforce fat-shaming and the policing of women’s bodies, not the brides. With that diatribe said, I recommend skipping over all the parts where the store biddies say words. Their opinions aren’t that important anyway.

In the end, Queen finds a dress that she loves, which makes me very happy. (There are episodes where someone does not get a dress because their size was not available.) Her mother is gushing and wonderful; her friend is not very amused and neither am I. In fact, her friend and I shared the same facial expression when we realized that this dress had a train of feathers and looked like it belonged in a Black Swan parody.

But what really matters is that Queen felt empowered, sexy, and beautiful.

Davone wants to have a “platinum diamond winter wonderland” themed wedding, on season six, episode fourteen of SYTTD. I really like that she rolled into that shop knowing exactly what she wanted. She continues to describe her stipulations for the dress, explaining that she’d like it to be form fitting from her waist to her thighs and “drama at the bottom.” Although she and her partner Tiffany would like to have a “traditional” wedding — unlike other lesbian couples, Davone observes — this bride wants her dress to be peach. (I can’t lie; I love it when people disrupt the whole pure white dress aesthetic.) Davone does have a “problem” in her efforts though; she has to find a dress that can contain her large breasts.

Again, the store stylists are pretty awful at the way they regard her breasts, soooo… let’s pretend that they were not in this episode. I love how Davone’s friends were honest in their observations but very fun and supportive. “We need so much bling (on your dress) that we’re giving out sunglasses at your wedding,” one of her friends deadpans. By the end of the episode, I wanted not only an invitation to Davone and Tiffany’s wedding, but also the chance to turn up with Davone’s friends. Davone unfortunately does not get a dress for the silliest reason: apparently, some wedding dress designers refuse to allow alterations to the busts of their dresses. If I were Davone, I would’ve bought the dress she loved and found someone to alter it under the table. (Reason #9202492 why I most likely won’t get married.) But Davone gets another chance to shine on TLC when she’s featured in the show Four Weddings in 2012.

I really enjoyed watching Amber and Anjeshia, two brides from South Carolina. The two actually were featured on Say Yes to the Dress: Bridesmaids, where the focus shifts to how individuals want to dress their altar entourage. Amber wants her friends to look sexy and to show as much skin as their hearts desire; Anjeshia, on the other hand, would prefer a more “classy” look for the bridesmaids, and definitely wants cleavage covered. While I think some of Anjeshia’s concerns extend to some internalized respectability politics, I see her perspective. It’s really important to Anjeshia that the wedding party can dance, because Amber and Anjeshia met while dancing. I would also want dancing to be a big concern in the outfit choosing process.

The two brides are both really opinionated, but Anjeshia takes the cake because she comes prepared with visuals. Anjeshia creates a chart called the Boob-O-Meter, and explains to the stylist that she would like the bridesmaid dresses to fall somewhere around a 7, with respect to cleavage visibility. Full disclosure: I couldn’t actually watch the entire episode through, so I have absolutely no idea who wins the Battle of the Breasts. But I do know that I will adopt a Boob-O-Meter for my personal life whenever I buy clothes. I think my aesthetic is 9 on the scale.

These two are my favorite couple of the bunch. In “Not What I Had in Mind,” season 10, episode 12 of SYTTD, we meet LaQuet and Lauren, a Black lesbian couple who have been together for four years. Teary-eyed and describing her soon-to-be wife, LaQuet says Lauren makes her “feel like warm cookies straight out of the oven.” This episode makes me realize that I will change my mind and marry anyone who says this about me. (See, I told you this show does things to you.)

LaQuet spends most of this episode giggling and her joy is quite contagious. She’s a bubbly Broadway performer, and all she wants is a fun dress with some kind of sleeve so that the dress won’t draw too much attention to her toned arms. I’m not sure why she wouldn’t want to show off her muscles because I always thought muscles were the dyke badge of honor. The stylists agree with me and bring her dresses with and without sleeves. For the majority of her segment, LaQuet is disappointed by dresses she feels make her look matronly. In the end, she falls in love with a dress she thought she would hate and cries happy tears while we all bask in her beauty.

LaQuet and Lauren let us viewers see into their wedding at the end of the episode, which is an awesome choice. I love seeing queer women, especially queer women of color, happy and loving one another. More importantly, the theme of LaQuet and Lauren’s wedding is “drunk, tanned, and married” because “that’s just how much fun we’re gonna have.” I’m telling you, the lady gays on this show are so much fun. 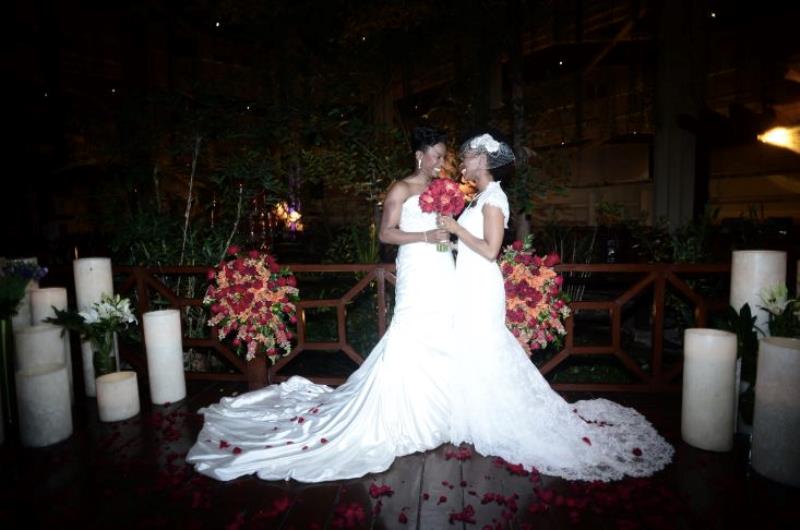 SYTTD is a great guilty pleasure show because it lets you celebrate with people experiencing what they may consider one of the happiest moments of their lives. Also you don’t actually have to question if you’re making the right decision about what you’re wearing while you watch the show. Personally, I love watching people make decisions that have no claim over my life.

While SYTTD is by no means a perfect show, nor does it necessarily communicate the various perspectives and aspects of marriage, I think it’s a fun show. I have no qualms engaging in a program that offers one of the healthier images of queer lady love.

Make sure you catch Brittney Griner, Glory Johnson (and my) Say Yes to the Dress episode this Friday, January 30th at 10 p.m. EST on TLC!