Sally Kohn started showing up on our radar right around the time the Presidential race really took off. We read her article on Sally Ride’s widow and saw her name showing up all over Salon’s essays, but it was her brilliant piece on Paul Ryan’s speech at the Republican National Convention – the Fox News piece that instantly went viral – that made us realize we absolutely had to talk with her. A few short weeks later, we were lucky enough to be doing just that. In an interview over Skype, Sally graciously spoke with us about her role as a progressive voice in the media, the election, and the idea that our voices can facilitate real change.

Although she currently works as a political commentator, Kohn says it’s not something she ever considered as a career while she was growing up. “I don’t think it was something to aspire to be until fairly recently, and even then I didn’t aspire to it,” she said. “I aspire to making a difference in the world. This is the current incarnation.” Her previous contributions to social justice are no less impressive. Her resumé boasts fellowships with the Ford Foundation and the National Gay and Lesbian Task Force Policy Institute as well as a stint as a Senior Campaign Strategist with the Center for Community Change, and she jokes on her LinkedIn profile that she has earned the right to call herself a “professional gay” for the rest of my life.”

Since making the jump from policy and activist work to the media, Kohn’s writing has appeared in national publications and on blogs, and she is frequently featured as an op-ed columnist for Salon and a contributor to Fox News. We have to admit that initially, we thought the idea of being a progressive voice for an infamously unbalanced media outlet sounded exhausting. But Sally’s personal brand of activism isn’t about validation, it’s about engagement. “It’s a choice between challenging or boring. It seems to me incredibly boring to just sit there and talk to yourself, and people just like yourself… My interest is in changing the world, not just venting about it.” 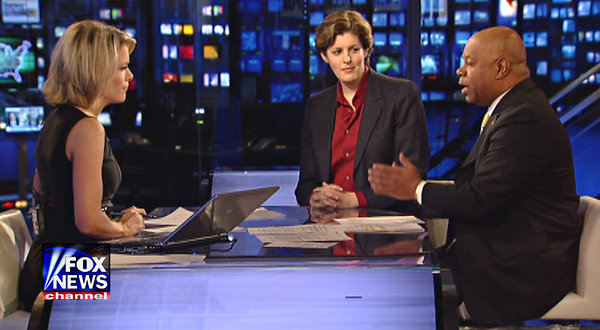 Via: The New York Times

For Kohn, the proliferation of media that has come with the Internet is a double-edged sword. “I think freedom of information, more information, is a good thing, but the converse to it is that you end up in this scenario where you can be selective in what you choose to consume, and you can only seek information that confirms your particular opinions and biases and so forth. And I do think that that is dangerous to our democracy.” And as anyone who’s logged into Facebook in the past month can tell you, it’s not just traditional media outlets that are pushing us into more insular communities of knowledge.

“There’s a really great book by a friend of mine named Eli Pariser called The Filter Bubble. It’s about increasingly how the way the web is inherently structured, we are more and more exposed only to information that we like… It…drives me crazy because I think that everything from our democracy to capitalism and everything in between relies on information, and a breadth of information, and also on making informed decisions that aren’t just about our own little silo.”

But what do you do when the people who are close to you don’t share your beliefs? Sally thinks that talking with your family about politics can be a way to learn how to have these important discussions in other settings.

“If you’re doing it in the context of family, then you’re doing it in a loving way, hopefully… One of the things that really upsets me is when people on either side get in each other’s faces and are just mean and nasty and dismissive. …I understand that people have really strong opinions and deeply-held passions, and this stuff matters, right? Lives are at stake, and the future of our country. But I just feel… like we should be able to find our common humanity and aspire toward a higher level of engagement with each other, as opposed to always just rolling down in the mud.”

Kohn’s consistent optimism was inspiring and, quite frankly, surprising, but as we asked her more about it we started to understand how she can maintain such a positive outlook working in contemporary American politics. “My deeply-help ideals come not out of a place of anger,” she told us, “they come out of a place of love. I love my country, I love the people, I want the best for them.”

Sally’s optimism continued to stand out when we asked what she would most like to see happen in the country. Her answer was not about changes one side needed to make; rather, she hopes that all citizens will stop treating government as a force of evil.

Though she sees the value of a well-funded government, Kohn firmly believes that money should play only a limited role in an election. The second thing she said she would like to see in the future is “a constitutional amendment that overturns Citizens United [v. Federal Election Commission, a Supreme Court decision that rejected a limit on corporate spending in elections]… states emphatically that money is not speech, places extreme spending limits on presidential elections and really restricts the campaign spending of outside organizations, both corporations and unions included.” As she sees it, money has gained entirely too much power in our political system. It’s people who matter, both on an ideological and a practical level; “we know that the person that spends the most usually wins… but at the end of the day they still need votes.” 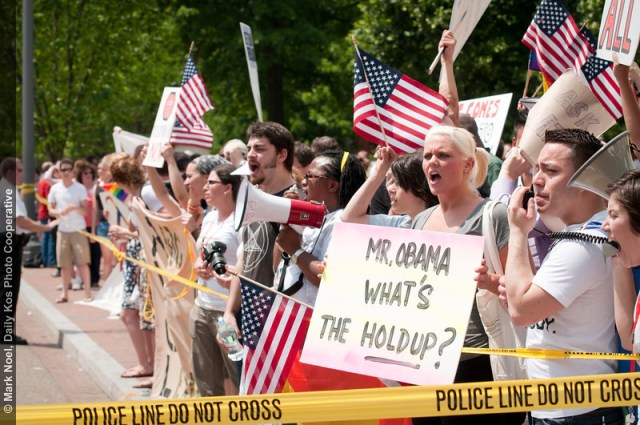 Still, you’d think it would be easy to become jaded when you start to consider just how small one person is. Sally doesn’t buy it; she finds motivation to participate in politics easily. Politicians, she points out, do not function quite like humans. Their decisions are calculated based on risk – “they have to pay a price for not doing something” – which means that we can control them using our votes or by changing public opinion.

“That is a really instructive lesson to people who feel disillusioned not because they are checked out, but because they have aspirations and ideals that don’t feel reflected by either of the candidates. They feel too bold for either of the candidates. Well that’s our job! Our job is to press them. The things that Obama has done – maybe he hasn’t done enough – but the things he’s done? He did because he was pressed, by people who joined together and formed organizations and email lists and protests. Immigration, Don’t Ask Don’t Tell, marriage equality, healthcare reform, you name it. Whatever his own personal predilections, the urge to actually act did not emerge from himself. It emerged from the pressure that was put on him. We’re absolving ourselves of our role and responsibility if we then say, ‘Oh, I’m out.’ If he’s not bold enough, if he’s not left enough, if he’s not pro-gay enough, then damn it, whose fault is that?”

It’s a powerful message for those of us who have been disappointed with the progress Obama’s made over the past four years. As the country heads out to vote in an election that is arguably less certain for Obama than the race was in 2008, a desire for real change will be weighing heavily on most voters. As we wait to see how this race plays out, we can only hope our fellow citizens are as optimistic as Kohn is our ability to change the country.

“We have so far to go still, but look at how far people have come on race, on gender, on sexuality. There is no question, when you look at how people talked, what they said in private company and public company, a century ago and what they say now. Who was and wasn’t allowed to vote, the fact that people thought that was okay, and how that’s changed. It’s breathtaking how much has changed, how much people have changed. So it is possible.”