Aiming to protest Putin and the Russian government’s policies against women, the anonymous feminist collective Pussy Riot formed in August. The group has since harnessed the power of punk music to bring attention to topics such as abortion rights and prison reform.

With massive protests in the streets of Russia and the upcoming parliamentary election in which Putin is likely to regain power as President, tensions are high. We recently gave you a closer look at queer politics in Russia as seen by an American abroad, so check that out, too. 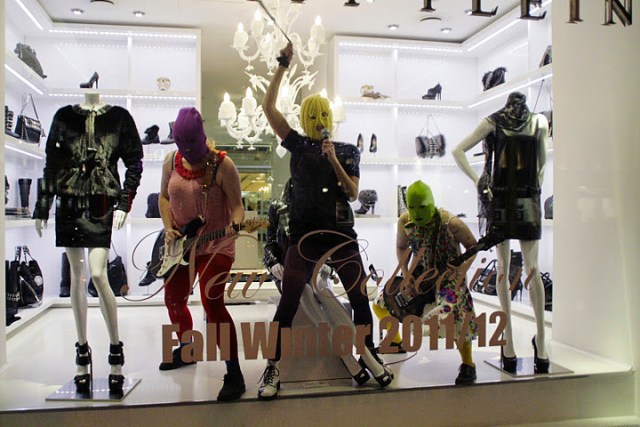 Laura Barton of The Guardian writes of the group in context of other feminist protests in Russia:

In the months since their formation, the eight members of Pussy Riot have perfected their own form of protest: their songs are pithy, angry missives, largely directed at Putin, and they remain beguilingly anonymous – the band wear neon balaclavas to conceal their identities and perform flash gigs in unexpected places: on public transport, for example, and, once, on a prison roof. In mid-January, they pulled off their most audacious show to date: performing on a platform in front of St Basil’s Cathedral in Red Square, opposite the Kremlin: “Revolt in Russia – the charisma of protest,” they sang. “Revolt in Russia, Putin’s got scared!” It was the shortest of performances, only minutes before the authorities hauled the group away, but the point had been made.

The fact that Pussy Riot are all female and proudly feminist brings an interesting dimension to their protest: “The revolution should be done by women,” one of its members told the Guardian this week. “For now, they don’t beat us or jail us as much. There’s a deep tradition in Russia of gender and revolution – we’ve had amazing women revolutionaries.”

To see some of their performances that have since gone viral check out their youtube channel. 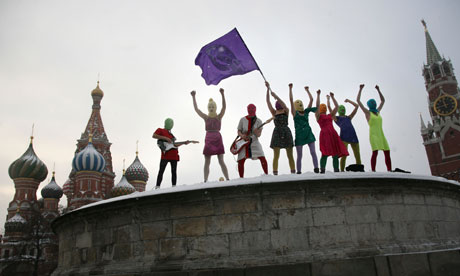