On the heels of The International Alliance of Theatrical Stage Employees (IATSE) groundbreaking win for better working conditions in their negotiations — and strike threat — with the Alliance of Motion Picture and Television Producers (AMPTP), this morning Ruby Rose took to Instagram talk about their experience with dangerous set conditions on Batwoman, which included more details about the neck injury they suffered while doing their own stunts in 2019. They also mentioned seeing a crew member suffer third degree burns all over his body, sustaining a cut on their face that was “so close to my eye, I could have been blind,” losing two stunt doubles over the course of the season, and being forced to film during Covid when all the CW’s other series were shutting down.

In their Instagram stories, Rose also called out several Batwoman execs, from Former Warner Bros. Television Group Chairman Peter Roth, who Rose says made young women “steam his pants… around his crotch” while he was still wearing them; to showrunner Caroline Dries, who Rose says “has no heart and wanted us to finish the season throughout the pandemic” and who “maybe visited the set 4 times in a year”; to co-star Dougray Scott, who “hurt a female stunt double” and “yelled like a little bitch at women and was a nightmare.” (Of note: Both Roth and Scott have left WB and the series.)

Rose’s Instagram posts color in some of the lines that they drew when they left the series after the first season. At first, the decision seemed like a tense but mostly amicable split but as more statements and interviews and rumors and Insta lives from the cast have rolled out, the situation has seemed a lot more messy than the original press releases let on. And now we know!

As Hollywood continues to be dragged, kicking and screaming, into 2021, it’s as important as ever for LGBTQ+ folks, women, people of color, and disabled cast and crew to share their stories to generate collective power and force accountability and reform.

As I was reading Rose’s IG, I was thinking about recent conversations from Azie Tesfai’s (Kelly Olsen / Guardian from Supergirl) Instagram Live, where she got together to talk with Javicia Leslie (our Batwoman) and Candice Patton (Iris West from The Flash) to talk about being Black women in the Arrowverse, and how they’ve had to form their own support group to deal with racism from the top down while filming and promoting their shows. Javicia Leslie mentioned, more than once, for example, that DC’s decision to keep Kate Kane alive was a nightmare for her because it opened up even more doors for racist attacks from fans who wanted Kane back in the cape and cowl, or from shippers who wanted to see Sophie back with Kate instead of growing closer to Ryan Wilder. She can’t even turn on the comments during her IG Lives, due to the blatantly racist remarks

This on top of the racism these Black actresses deal with at comic cons, where they get shoved into un-trafficked corners for autographs with little promotion from organizers about their events or panels; and from their own co-stars who have a shameful track record when it comes to showing up for the Black women they work with. Wallis Day, who took over for Rose as Kate Kane in Batwoman season two, even went as far as to encourage racist abuse against Leslie by laughing at people who called her out for not standing up when commenters hurled racist abuse at Leslie on Day’s social media posts. 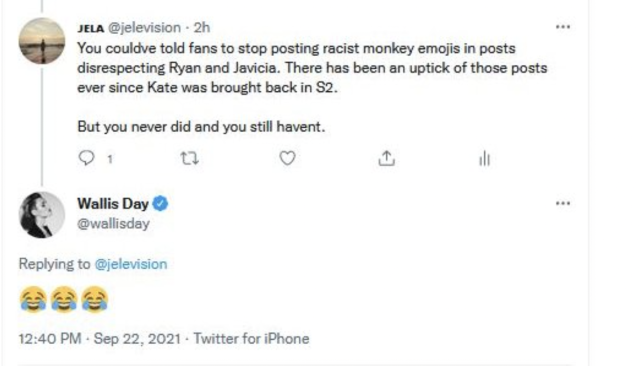 We’ve even seen this play out at Autostraddle, with commenters consistently questioning the CW’s decision to create a new superhero played by a Black bisexual woman, instead of supporting a revolutionary storytelling decision during an unprecedented uprising for Black lives. Which is to say: Questioning the whole entire point of superheroes! Which is to be the role models and protectors we need at the exact time we need them!

As “Batwoman” and “Ruby Rose” trend on Twitter and countless people call for a shut down of the show because of Rose’s posts, I hope we’ll keep in mind the totality of the abuse queer people and POC have suffered on these superhero sets over the years, and come together to continue to push for sweeping change that protects everyone on set and in writers rooms and in executive offices, especially those most vulnerable in our community.