Let me preface this with saying that I went to an arts high school where I studied musical theater, and musical theater has long been very dear to me (Grease is the first movie I can ever remember watching). For as long as I can remember, musicals make me incredibly emotional. So… when the cast of Riverdale starts breaking out into song approximately one minute into its highly anticipated musical episode, I got choked up? I literally almost started crying. The same thing happened to me when I saw the Crazy Ex-Girlfriend pilot for the first time. And the first time I saw Buffy’s “Once More With Feeling,” which I’ve since watched at least a dozen times. And yes, even during the Grey’s Anatomy musical episode which is extremely bad! I just love musicals so much! And television so much! And when they collide, I become overwhelmed with feelings.

Riverdale is the perfect show to tackle the musical episode convention. It’s over-the-top; brimming with complex, bold characters; explicit in its motifs and stylization. A lot of the most extra dialogue in this episode is pretty much business as usual for the show. “I’ve just had a wicked idea,” resident villain Hiram Lodge muses, plotting to further destroy the relationship between Archie and his dad. “I will not succumb to thespian terrorism!” Cheryl Blossom exclaims when multiple notes supposedly from the Black Hood show up threatening violence if Kevin Keller doesn’t replace her in the lead role of Carrie. Penelope Blossom tells Cheryl her “matricidal revenge fantasy” is never going to happen as she forbids her from performing. Any of these glorious quotes could be from any episode of Riverdale, so no, the show doesn’t exactly have to play up its drama to situate itself in the realm of musicals. It’s already a perfect fit.

And Riverdale also doesn’t exactly have to reach to create parallels between the show and Carrie: The Musical — not at all. Riverdale’s showrunner Ricardo Aguirre-Sacasa penned the 2013 Carrie remake, so it’s no wonder he’s perfectly positioned to parse out connections. The parallels are right there, and sometimes the writing does a little too much to spell it all out for us, but it doesn’t get too distracting. And, hey, what are musicals if not painstakingly on-the-nose? As Betty reiterates multiple times, Veronica playing mean girl Chris Hargensen is apt considering how much she has been lying to and manipulating her friends at the behest of her maniacal parents. Yeah, Veronica singing the lyrics “my daddy taught me / you get no where being nice” is certainly… relevant.

Alice Cooper plays Carrie’s mom in the musical, because of course all the parents have to get involved (The Lodges are producing, Hermione Lodge has a full-page campaign ad in the playbill and is spotted handing out buttons in a high ponytail on opening night, and Fred Andrews is building the sets). And when Alice starts singing about how everyone always leaves her, the musical and reality start to blend so much that she goes off book, begging Betty not to leave her. It’s a raw, borderline uncomfortable moment, but it rings as emotionally honest for the character. She shows up all giddy and flirty at the diner to talk to FP, and it’s implied that they’ve rekindled their sexual relationship, but then he immediately pulls away. She was worried about Betty and Jughead making the same mistakes they did, but instead she’s just making them all over again with FP. Unfortunately, this all leads to Hal waltzing back into Alice’s life. Hal somehow always finds a way back into the Cooper home. Can he please be Riverdale’s next murder victim? 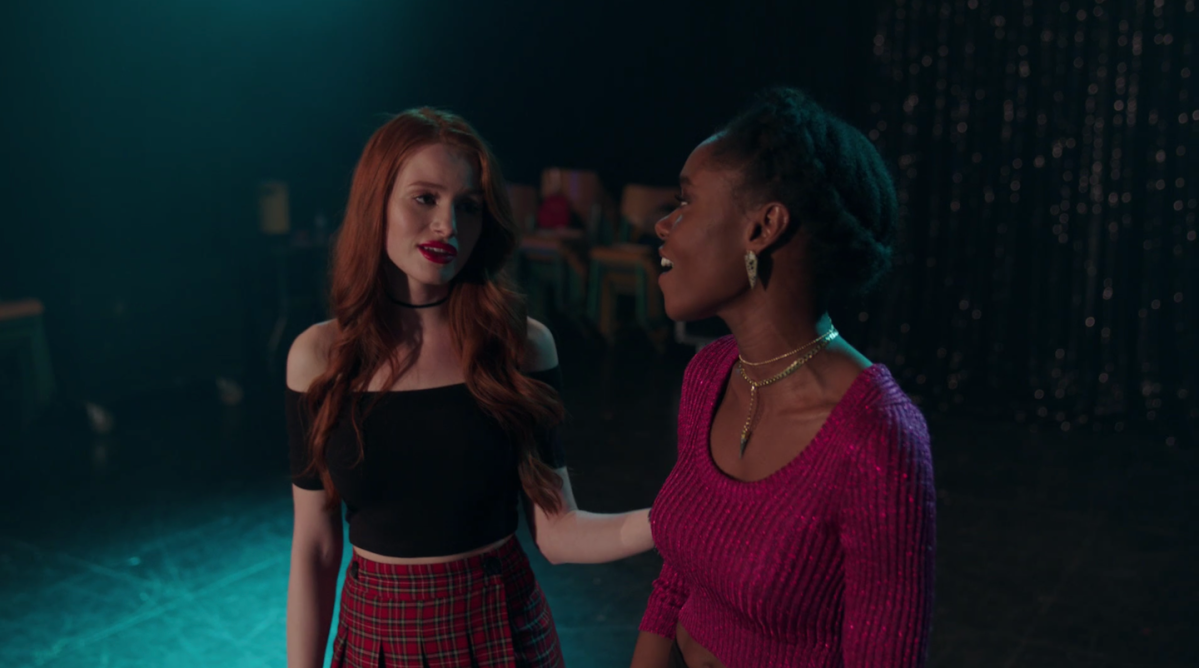 When in doubt, sing it out

Perhaps the most fitting parallel between Carrie: The Musical and Riverdale is the perfect casting of Cheryl as Carrie White. The queer subtext in the original Carrie film overfloweth, and Riverdale does an excellent job of teasing that subtext out by creating an emotional connection between Carrie and Cheryl. That connection is both obvious yet layered. Cheryl can certainly relate to a girl suppressed and abused by her mother. Cheryl can certainly relate to a girl who kills her mother. Cheryl also uses the musical to apologize to Josie. She admits that she acted like a stalker, explaining that she was dealing with some serious Carrie-like demons. THEN THEY SING IT OUT! Have I mentioned I love musicals? I really love musicals. Cheryl work through their friendship issues by singing about friendship. GET IT?

And they’re not the only ones. Veronica and Betty also sing it out after Archie convinces Betty that Veronica’s bad deeds are the result of pressure from her parents and reminds her how quickly Veronica forgave her after the Black Hood manipulated Betty into being mean to her. Archie and Betty start singing Tommy and Sue’s love ballad to each other rehearsal, and then the show just seamlessly shifts to BETTY AND VERONICA SINGING THE LOVE SONG TO EACH OTHER in what is definitely fuel for the Beronica ship. Somehow, this is the gayest scene to happen in the episode. 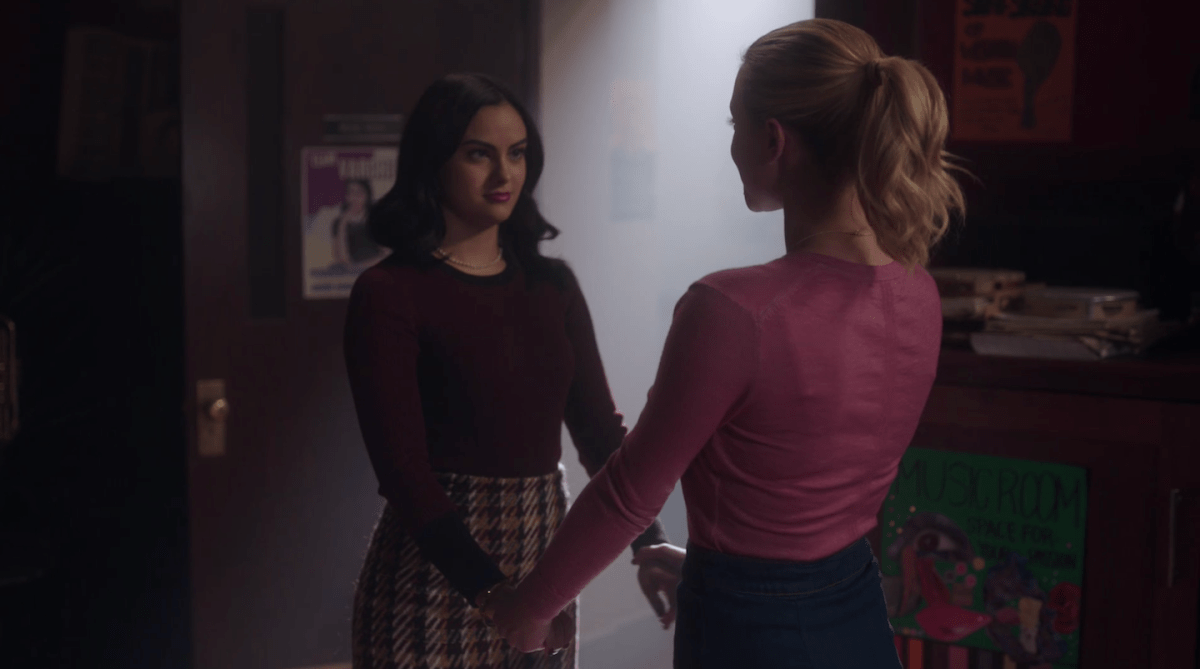 They are…literally serenading each other

We do get a blessed Choni scene, but it’s painfully short. Aguirre-Sacasa mentioned in an interview that several scenes had to be cut for time, teasing that one of them was a Choni scene… which is frustrating to say the least. Sure, they aren’t in the core four, but Cheryl’s emotional parallels to the musical should be more centerstage than they end up being, and cutting queer content for time is just a bad look, especially when so much of Cheryl and Toni’s story together has been dominated by the devastating conversion therapy plotline. But part of why Aguirre-Sacasa brought it up seems to be that he thinks he’ll be able to release those cut scenes if there’s a big enough reaction to the episode, so it sounds like he wants them to come out.

There are some little nice moments sprinkled throughout, like Toni being the only one to immediately give Cheryl a standing ovation after her first big solo and Toni immediately rushing to Cheryl’s side after hearing that Penelope banned her from performing. Together on the bleachers, Cheryl laments that she’s no longer the girl who stood up to her mother, who burned down Thornhill and cut off Penelope’s oxygen. Toni pushes her to find that strength again, to not let her mother win. Their scene together is genuinely sweet, but it also admittedly feels truncated. 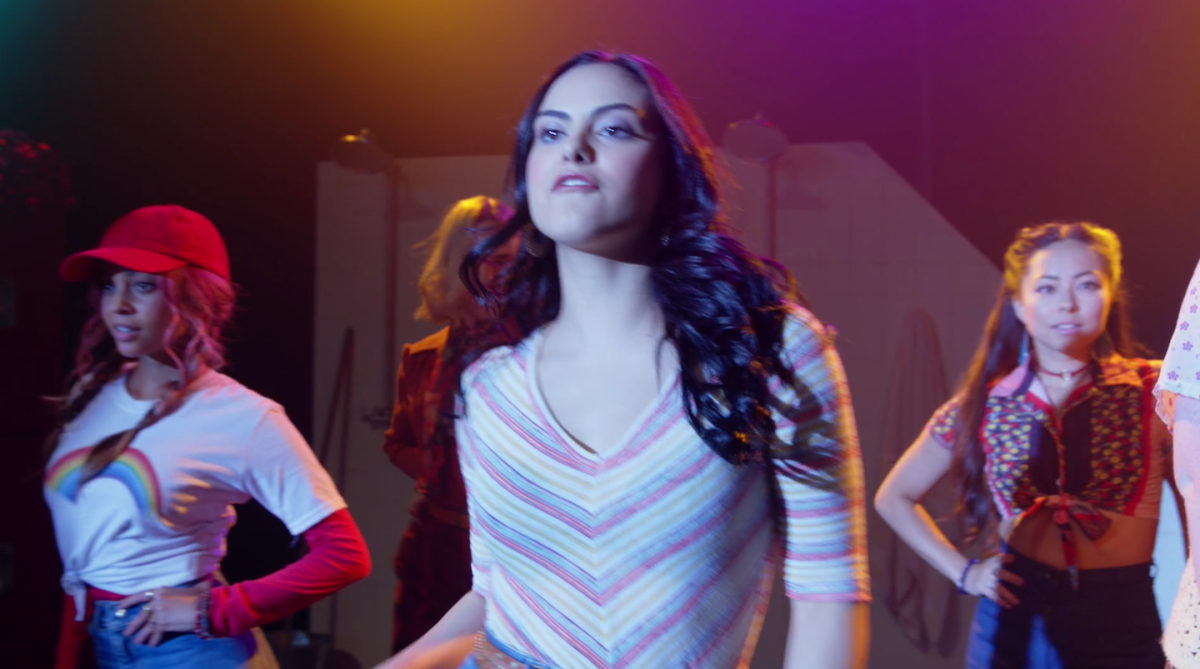 Including this screencap because of Toni’s rainbow shirt, thank you for your time

Then Cheryl gets her big, show-stopping pig’s blood moment. And no, she isn’t the victim. She pours the blood on herself. Drenched in blood, she threatens Penelope once again, seizes the upperhand. She demands emancipation and for Penelope and “Uncle Claudius” to leave Thistlehouse. Somehow, she tops the time she burned her own house to the ground with a chilling, theatrical scene that serves as the dramatic climax of the episode. The scene also makes use of Cheryl Blossom’s favorite accessory: a candelabra.

Some additional, bullet-pointed feelings, because I have a lot of them and you probably don’t want to read a novel-length recap: