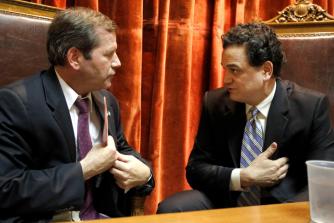 The Rhode Island Senate will now vote on the bill. Most news stories about this aren’t concerned about its chances there or on the governor’s desk, so it is hard to tell what the odds are that civil unions will actually become available. The Advocate reports that the Senate leader supports the bill, and a 62-11 vote in the House is clearly across party lines, so maybe it will pass.

Unfortunately, a very restrictive religious exemption was included in the bill. Gay and Lesbian Advocates & Defenders, a New England LGBT rights organization, has come out against the bill.

“The religious exemption amendment goes much further in allowing religious charitable and educational organizations – such as social service providers, hospitals, and educational institutions – to treat legal civil unions, authorized under Rhode Island law, as invalid for any purpose,” GLAD wrote in a news release today.

Openly gay Rep. Frank Ferri told the Providence Journal: “I believe that it is a step forward… There are many couples that need these rights and, today, they know now when they go to the hospital, when they go to a nursing home, their property is protected, they have rights that they didn’t have — as soon as the Senate passes it and the governor signs it.”

If it does turn into law, then Rhode Island would be the fourth state to enact civil unions, behind Hawaii, Illinois and New Jersey. Some lawmakers, such as Rep. Ferri, have made it clear this is just a step along the way toward total equality. They hope to make Rhode Island join the five U.S. states that have legalized gay marriage.

And on the federal front, things look much better for gay marriage than they did a few years ago. Obama’s refusal to defend DOMA in a federal court a few months ago is a big step forward. U.S. Rep Barney Frank thinks the president might take things even further: “This is just my intuition, but I think the President will be supportive of marriage in the states that offer it before the 2012 election,” Frank said.

That’s a pretty qualified statement, but it would be much better than Obama’s stance on marriage equality in 2008 and would at least silence a few critics. Maybe it could pave the way for same-sex marriage in states like Rhode Island, the ones on the brink  of equality.