The observation that many of the women who have made it farthest in the arena of American politics, like Sarah Palin and Michele Bachmann, are not the fiercest proponents of women’s equality has been made. So it’s perhaps not surprising that the 24 Republican women of the House of Representatives have now come together to form the Women’s Policy Committee, but that the group’s stated goal is not, as the name might imply, working towards policies that would help women, but “to raise the profile of the conservative ladies serving in Congress.” Additionally, not only are these ladies apparently more concerned with raising their own profile than elevating the quality of life or legal rights of other women, they are in many respects actively working against that end goal! 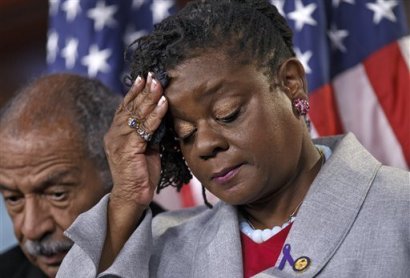 actual face made by Rep. Gwen Moore, D-Wis during hearings on VAWA

ThinkProgress has an excellent breakdown of how exactly the women of the Women’s Policy Committee have behaved legislatively towards women. For instance, 22 of the 24 opposed the expanded Violence Against Women Act that would have provided increased protections for LGBT people, immigrants, and Native Americans. Of the 15 women who were in Congress when the Lily Ledbetter Fair Pay Act was introduced, all 15 voted against it. (Against a bill that would outlaw discrimination in pay practices against women.) On their annual scorecard and voter guide, Planned Parenthood gave 20 of the 24 women a ZERO, citing the fact that they “voted against reproductive health at every opportunity.”

Again, this is not necessarily a surprise. It’s not a surprise in terms of the fact that the GOP pretty clearly has it out for women, and the fact that the GOP has female members doesn’t change that. But it’s also par for the course in terms of the fact that while voting members of marginalized groups into positions of political power is often a goal, being a member of a marginalized group doesn’t necessarily mean you’ll work with that group’s best interests at heart once you’ve been elected. It’s an acknowledgement of the fact that it’s much easier to get ahead in politics — not even necessarily conservative politics — if you support the status quo rather than question it. More women in Congress is a dream that many women have been working towards for generations, but unfortunately that doesn’t guarantee anything, as the women who voted against paycheck fairness demonstrate.

Although the “Women’s Policy Committee” as it stands is a little depressing, that doesn’t mean there’s reason to lose hope altogether. While it would be wonderful if the government worked to meet the needs of the people, especially those people underrepresented within it, it’s been shown time and time again that that isn’t always the case, and the new “Women’s Policy Committee” is only one part of that long story. But that means that we just need to keep doing what we’ve been doing — telling our own stories so that something can change. We owe ourselves and our communities a level of outrage, and a commitment to not taking any shit, “profile-raising” or no. All we need to do is not give up on the work we’re already doing, and someday there will be a group of people who care about raising up us and our families, not just themselves.