Religious conservatives seem to be becoming a minority faster than we think, thanks to what the Atlantic is calling the “Quiet Gay Rights Revolution”, in churches across the country. The social shift towards the acceptance of same sex couples has continued to put pressure on religious institutions to show support of, or at least stop openly condemning, LGBT equality. 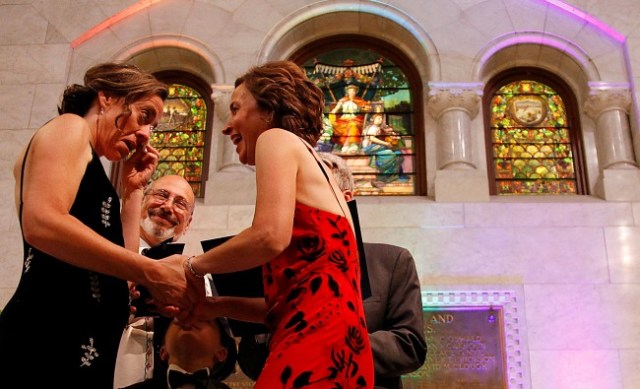 From President Obama’s reelection after his marriage equality statement to the Pope’s message that that gay people should not be marginalized, the future is looking a little brighter for LGBT people of faith. The wave of this movement ranges from the rising population of actively engaged left-wing Christians to the sects and/or congregations who are begrudgingly coming to acceptance so as not to lose popular favor. What is the driving force of this change? It’s twofold: both in response to recent court decisions that are legalizing same sex unions and to a network of outreach campaigns from local and national organizations. We’re familiar with the legal victories, but the social movements within the religious sector also have a tremendous impact. Various campaigns have worked to negatively spotlight and marginalize gay marriage opponents, in order to discredit leaders of large congregations (like megachurches) and insist that they do not speak for the entire community.

Some of this change is being spearheaded by the leaders themselves. Delman Coates, the head of Mount Ennon Baptist Church, (which has 8,000 members), used the experience of a family member as the catalyst to reshape his opinion. In early 2012, Coates testified in support of a bill in Maryland legalizing same-sex marriage. Though not expressive of his personal beliefs, Coates did say, “It is not a question of private belief, but whether all citizens of this state have the same rights.” As a prominent African American religious leader, this decision made a clear statement that sits in opposition to the opinion of the majority of prominently African American churches. For many Southern Baptists, as explained by Russell Moore, head of Southern Baptist Public Policy, among churchgoing, conservative evangelicals, the convictions haven’t changed at all. But there is fatigue — more than fatigue — there is a rejection of seeing those who disagree with us as enemies.

According to the Public Religion Research Institute, the shift in attitude regarding same sex coupling is measurable, with Jewish Americans leading the progressive inclusivity as the more outspoken evangelicals and Protestants are slowly evolving:

Religious groups fall on both sides of the same-sex marriage debate. More than 8-in-10 (81%) Jewish Americans, roughly three-quarters (76%) of religiously unaffiliated Americans, 59% of Hispanic Catholics, 58% of white Catholics, and 55% of white mainline Protestants favor allowing gay and lesbian couples to marry legally. By contrast, more than 7-in-10 (71%) white evangelical Protestants, nearly two-thirds (65%) of Hispanic Protestants, and 57% of black Protestants oppose same-sex marriage.

Progressive members of religious groups are working to redefine the messages surrounding their communities to emphasize the teachings of compassion and tolerance. On the large scale, the Human Rights Commission has looked to become involved in religious festivals and events. Sharon Groves, director of the religion and faith program of the HRC described their participation in the annual Wild Goose festival to The Atlantic as enlightening and healing for those in attendance. A smaller but effective organization in New York, Empire State Pride, started a three-tiered program to educate and rally support from three traditionally conservative and politically influential sectors of the community: corporations, labor unions, and people of faith. These campaigns, titled Pride in the Workplace, Pride in Our Union, and Pride in the Pulpit, opened the dialogue between the LGBT rights organization and the wider community. From the description of Pride in the Pulpit: 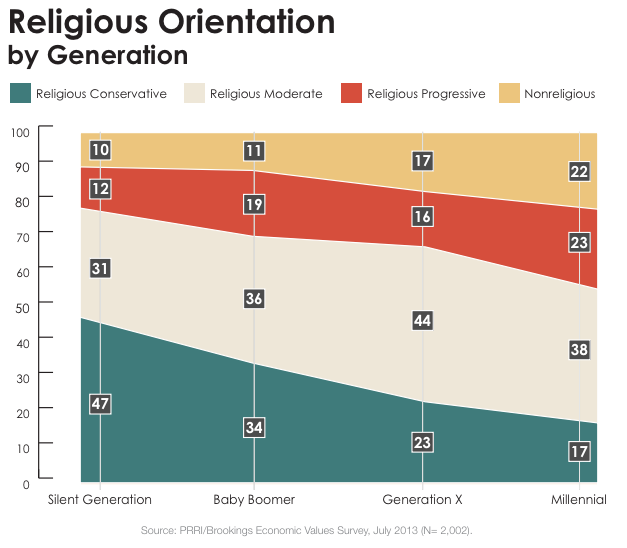 There’s hope that with the continued work of local organizations and progressive religious activists, the Christian Left mentality will be a reflection of the majority of churches across the nation. The ulta-religious rightwing is wavering as GOP politics have catered to extremists that no longer speak to the moral sensibilities of our changing society. The cultural marginalization of the religious conservatives signals a shift in power, giving voice to young leaders who want to emphasize community building over exclusion.