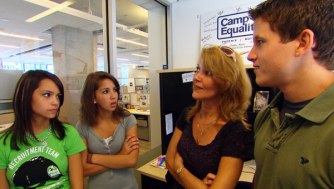 WASHINGTON DC: When not suffering in silence behind Irrelevant Erica’s noxious 24-hour pity party, the cast of The Real World DC has been surprisingly bright-eyed and bushy-tailed about getting involved. You know, like in GAY RIGHTS AND STUFF.

Mike, the bi guy who everyone thinks is really just gay, is especially earnest about working for the HRC. Obvs he’s never read Queerty or Andrew Sullivan or been assaulted in line for the L Word premiere by anti-HRC fanatics. Although Mike spent the first ep yelling about Jesus, he’s ‘evolving’ or whatever it is people do when stuck in a house with seven strangers they don’t especially care for. This episode, Out of the Closet and Onto the Stage was downright adorbs. Even Queerty likes him now.

And yes, while it’s true that likely most of you reading this weren’t met with warm receptions when you came out to your families — or still haven’t — the scene was a meaningful reminder that there is another kind of family out there. I think it’s hard to discuss anecdotally, almost out of respect for those with terrifying coming out experiences. But some parents want to know what you’re up to, who you love, and what you’re passionate about. They want you to give them the benefit of the doubt. They might even be hurting that you don’t trust them enough to just keep them in the loop like you used to, before you got so scared that they were scared of you.

And there’s some moms, like Mike’s, who’ve maybe only been guilty of believing what they read. It’s not hard to accidentally avoid exposure to any gay stories besides trend pieces and Will & Grace in syndication. Most people don’t know that ENDA protections for gay people suck. Maybe they just need to know.

Mike says his family and their opinion is important to them. However, regarding the lack of discussion around his sexuality, he said, “It would just create an awkward situation that didn’t need to be there.” 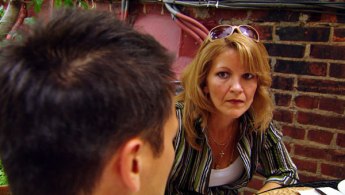 He gets his fam HRC t-shirts and tells them it’s the “Human Rights Campaign” (don’t you feel like Joe Solomnese called it that so that people could say it to their parents and their parents think that they’re like saving Malawi), which is adorbs, I hope they wear that shirt to church holler.

Then he sorta gets his HRC boss to help him come out with his family, and it works. He tells his Mom about how 28 states can fire people for being gay, and how gay parents in Florida who raise foster kids can get their kids taken away and how in Arkansas the small rights they had were repealed.

Mom: “When [my husband] and I went to get married, and Mikey was already 16 months old… and the priest told him I was making a mockery of his church… G-d forbid I was trying to marry a woman!”
Mike: “Who was he to judge you?”
Mom: “Right.

Then she’s like, “We had talks about it and I was like Michael your grandmother doesn’t even know and now that I see you know, what he’s doing, I’m sorry that I asked you to keep your mouth shut ’cause I see what you’re doing and I want you to know that I’m proud of you.”

She says she’s mad at herself for the ignorance. The HRC people sit there smiling like “we lost in California, but we won in DC today!” and Mike’s hair looks cute!

Okay now some links, not all of them are awesome.

VA LOVE: With a subtle omission of a few words, Gov. Bob McDonnell removed a protection for discriminating against gay and lesbian state workers in Virginia! (@daily beast)

NEW HAMPSHIRE: The New Hampshire House voted down two anti-gay measures this week. One would have repealed the same-sex marriage laws in the state, and the other would have proposed a constitutional amendment defining marriage as between a man and a woman.

The measures’ supporters had the usual arguments. I never get tired of hearing about “sexual preference” and the “end of society as we know it.” (@bostonglobe)

DC: The Washington D.C. Archdiocese has cut an 80-year-old foster-care program in response to a gay marriage law in the city. The law has already been passed by the City Council and the mayor, and if Congress doesn’t step in, it would go into effect this spring. The Church does not support gay adoption, and the new law would require adoption and foster-care programs to work with same-sex couples. (@washingtontimes)

OLYMPICS: Two Australian broadcasters are feeling the heat after they made gay jokes during the male figure skating broadcast.

ENDA: Rep. Barney Frank says the Employee Non-Discrimination Act is on track in the House. He expects a floor vote on the bill in March, though he isn’t sure how it will fare in the Senate. (@dc agenda)

MASS.: E. Denise Simmons, the former mayor of Cambridge, Mass., and the first black lesbian mayor in the country, has declared her candidacy for a Massachusetts state senate seat. (@advocate)

FIREFIGHTER: A California appeals court has reversed a decision that awarded $6.2 million to a black lesbian firefighter who said she faced discrimination.

“Brenda Lee … sued the city alleging the fire department discriminated against her based on her race, gender and sexual orientation and refused to transfer her after she complained of harassment.

Lee claimed her superiors yelled and made derogatory comments about her and put her through grueling drills without proper safety precautions. She also claimed someone put urine in her mouthwash.”

Apparently some evidence was excluded in the appeal, and the appellate court said that Lee “failed to pursue all administrative remedies” to the problem. (@latimes)

STING: A homophobic Aligarh Muslim University (AMU) administration had hired four TV crew to trespass into the house of one of its senior teachers and film him allegedly having sex with a man.”

KENYA: “Five Kenyan men who were arrested for planning a gay wedding have been released, according to BBC News. Police said there was not enough evidence to prosecute them, but police spokesman Martha Mutegi said the men were advised to leave the area for their own safety.” (@theadvocate)

FLORIDA: A Florida agency is attempting to stop a lesbian from adopting an infant, who is related to her and is currently in foster care. Florida law currently prohibits gay adoption. (@upi)