Not Your Mother’s Meatloaf: A Sex Education Comic Book is, as the title suggests, a sex education comic book. As you can imagine, I knew I had to read this/review this/own this the very second I heard the title. And then I heard that Alison Bechdel, one of my very favorite authors, had favorably reviewed the book. “I wish I could go back in time and learn about sex from this book,” said she. Blammo. I wanted it even more.

Basically, this book is one big giant sex-ed zine, but it’s a book. The way the work is placed one after each other, sometimes with no immediately visible title, and the way a reader can often see erasure lines and individual quirks lends the work an unmistakable zine-like quality. This really let’s the reader know two things – first, that what we have here is peer-to-peer storytelling. These comics aren’t made by teachers or medical professionals – this is DISTINCTLY and purposefully not advice coming from an authority. This is a “viewers like you” exploration of sexuality. And in a book targeted toward teens, many of whom are wired to challenge authority at this time in their lives, that’s probably a pretty valuable thing. For better or worse, teens talk about sex and teach each other a lot about sex. This book? It feels like that. Super important.

The second thing that zine-sensibility does is let the reader know, right off the bat, that this is a radical thing. Zines have been used by marginalized communities to get radical notions into the world for, well, longer than I’ve been alive. Meatloaf makes no bones about its completely radical idea of sex ed – that people should know the whole of it, from pleasure aspect of sex and to the fact that polyamory is a thing that exists — teens need to know that information. In the U.S., that’s really a radical notion. I think this is both a good thing and an interesting choice: radical sex education is absolutely a good thing! Knowing more about what you want earlier in life means you have longer on this planet to get what you want, and you’re less likely to make poor decisions about your body and your sex life. At the same time, this book references smoking, drinking and drugs in these teaching stories. While I am in full support of accurately portraying the sexual landscape and accurately portraying what people’s lives do truly look like (sometimes teenagers drink! Sometimes you smoke!), I’m wondering how many parents will hesitate to give this books to teens and twenties due to that? Necessary? You bet. Will this book every be taught in a classroom? Maybe not – it would have to be one hell of a radical classroom.

What I loved about this take on sex education is that it doesn’t leave out relationship education and identity – often what’s taught in schools is purely biology. Bodily functions only. For instance, one of the sweeter comics in the book is called “Three Generations,” by (A-Camper) Lex Goldstein and Kate Poole. It chronicles the real story  how three generations of women in each of their families have been the best of friends and have chosen to have kids at the same time. No one really talks about friendship and community bonds and positive experiences raising children in a sex education environment. Really, it mostly looks like this:

via the chlamydia tag on Tumblr, I shit you not

I also loved the discussion of sex and age – “Gray Sex,” by Mat Defiler points out all the attitudes in society that keep our senior citizens strictly in the celibacy zone, and why that’s not a good thing. And of course “The Ties that Bind,” by Leah Johnston and Tanya Wischerath was marvelous. That comic is about how breaking up can sometimes feel okay, and that past relationships and the things you learn from them can be entirely positive.

What I didn’t love so much about this book is that it doesn’t teach some of that standard biology stuff. I think that may have been a bit of a missed opportunity here, considering that many teens get substandard sex education in that department as well.  I would love to see another addition of this book with, say, a section on anatomy or how babies are made (all in comic form, of course). That way, when a school or family completely misses the train on sex ed, there’s at least hope that some kid in My-High-School-Doesn’t-Teach-This, Ohio can get their hands on a copy of this book and learn things about, oh, say, condom use. The basics. Ya know? And while I love the zine aesthetic, sometimes the handwritten text was a little bit difficult to read. 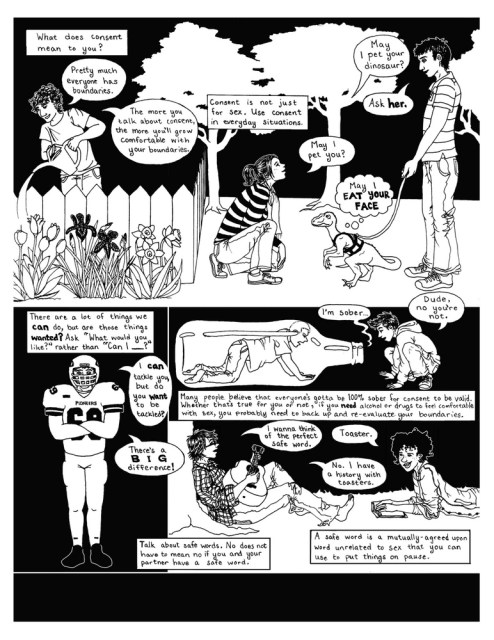 You can pick up a copy of Not Your Mother’s Meatloaf: A Sex Education Comic Book for $12.95 on Amazon.