When Rain Valdez released her short film Ryans, she said: “Romantic comedies historically have set the standard on who gets to be loved and trans women are often absent in this genre. We deserve this kind of love too.”

Valdez’s new web series, Razor Tongue, begins, like many romcoms before it, with a bad date. The guy asks where she’s from, doesn’t let her speak, and eats whip cream with his fingers. She tries to leave and when he protests, Valdez’s Belle unleashes her titular razor tongue. All the things someone might wish to say in that moment, she actually says. It’s hilarious, and, oh so satisfying.

She does the same in episode two at the end of a bad job interview. (Career troubles: another beginning of romcom staple.) Calling out his racism, sexism, and general dickishness, Belle is once again complete in her honesty. It’s equally as satisfying.

When she gets trapped outside at a party with her friend’s ex, the bro-y Austin, we expect more of the same. And she delivers. But, then, of course, they fuck.

Valdez’s commitment to the romcom genre doesn’t just result in an expert take on the format. It also allows a freedom to push and go beyond expectations. Enemies becoming lovers is a classic trope, but Belle will not be tamed. Even when she allows herself to fall, she remains herself. Austin has to get on her level, not the other way around. She is still her own priority. And this commitment to self, and to her values, may just get in the way of this new romance. 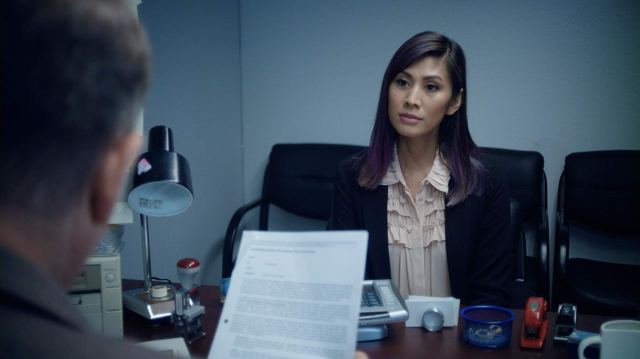 We’re still in an era of media and storytelling where it’s revolutionary to watch trans women fall in love and be desired on screen. But it’s always most exciting when this weight of representation gives way to a creator telling a layered and specific story. It’s not that the importance should be ignored, but it shouldn’t be the only impetus for the work. This is rarely a problem when people actually get to tell their own stories and that’s the case here.

Razor Tongue is simply a great romcom. It’s funny and sweet, challenging and sexy. It’s precisely written by Valdez and wonderfully directed by a quartet of women directors. It has a great supporting cast that includes Alexandra Grey and a stellar central performance from Valdez. The seven episodes go by so quickly and I’m happy to say a second season has already been written.

Razor Tongue was produced by Valdez’s Now>Ever, a self-described “woke AF production company.” Valdez is attempting to radically change the industry, shifting the stories told and who gets to tell them. She’s also making a compelling case that she should be to 2019 what Julia Roberts was to 1999.

It’s just a matter of time before Valdez is the lead in a big budget feature romcom. If Hollywood doesn’t make it happen then she’ll make it happen for herself. Either way, we’ll just be lucky we get to watch. And until then, check out this fantastic web series.

All episodes of Razor Tongue are available to stream now.