The survivor reported the incident to the police and had a rape kit administered within twelve hours. Police are currently investigating the incident, and it went public after a local listserv posted a warning to its readers about the driver. The survivor’s driveway, where the crime occurred, is shared with two other families, and several acquaintances were informed about the details of the crime by the family; the survivor reported to Autostraddle that one of them likely created the posting. Uber, the company the driver would have been contracted with, has declared that they “take these matters extremely seriously,” and that “it is [their] policy to deactivate the driver account of someone if we receive information that they have been suspected of committing a crime.” The driver has been interviewed by police, but not charged with anything. 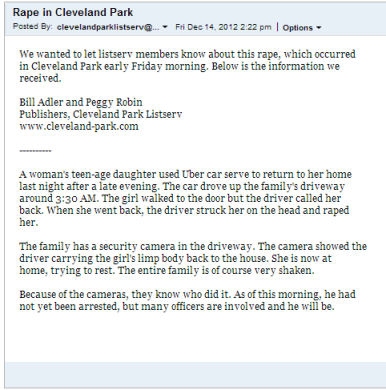 The survivor, an Autostraddle reader, contacted us about what happened to her: both the rape and what she’s dealt with afterwards from the media, the police and the public. Much of the early coverage of the attack was on local and community-oriented media, and doubt about what “really” happened has been horrifyingly rampant. Some have speculated that nothing happened at all, and the report is only a hoax in an attempt to hurt Uber’s business by a rival cab company (because a complex conspiracy of malicious cab drivers seems more plausible than a woman being raped). Others have raised eyebrows at the survivor’s story, arguing that nothing is worth reporting on or taking seriously until a police report is “seen” (because police reports are public documents?) or that the rapist’s decision to let her walk towards the house first was illogical (it seems pretty safe to say that deciding to rape another human being is inherently illogical).

Wildly misogynistic and rape-apologetic discussion won’t surprise anyone who has ever read the comments on a news article dealing with rape, or anything else on the Internet. Regardless of the details of the assault, placing the (unbearable) burden of proof on the victim every single time instead of the rapist is part of a deeply broken culture; demanding to see a police report when that’s exactly the behavior that leads to only 46% of rapes being reported to the police is ludicrous and insulting. But in this case – when there is literally videotaped evidence of what occurred, and the police are involved because the survivor reported the incident almost immediately – really illustrates that a desire to devalue the experiences of everyone everywhere who’s lived through sexual violence, and the willingness to accuse women of being self-interested liars before admitting that some men are rapists, will thrive regardless of the facts of the situation.

Far from being implausible or suspect, reports of a driver sexually assaulting a female passenger, or women being sexually assaulted while trying to get home safe in general, are far from rare. Just in the past week, a woman in Delhi was gang-raped on a bus, and just recently passed away due to her injuries. XOJane has reported on the fact that two of their writers have been sexually assaulted by the same NYC cab driver in totally separate incidents, which begs the question of how frequently even that one driver must be attacking the women he’s paid to transport. Regardless of the rampant victim-blaming and willful disbelief of this woman’s and many women’s experience, it’s fairly obvious that as unsafe as “walking alone at night” is, none of the alternatives we’re offered are safe, either. It’s not safe to take a bus full of other people. It’s not safe to take a cab home, to do the thing women are so often advised to do as the safe alternative after a late night out. There aren’t choices women can make to avoid being raped, not as long as there are people out there who choose to try to rape them. It’s been said dozens of times, but still hasn’t sunk in for many people.

There’s no way to say whether this particular survivor will see justice in the specific understanding of “justice” which means “seeing her rapist go to jail.” We can say with certainty that she will not see and has not seen justice in any real sense of the word, where justice would mean that she was able to leave her house and transport herself home without being sexually assaulted, and that when she was, the rest of the world would treat it as the travesty and occasion for communal grief and anger that it is. Survivors everywhere are long overdue that kind of justice, and it doesn’t seem like it’s coming anytime soon. But while we work for it, we can lend the power of our grief and anger to this woman, and to the other survivors in our lives, and to each other, and to ourselves.