Rachel Maddow aka the best TV talk news host aka the love of my life appeared on Conversations with Slate Tuesday in an interview with Slate’s Jacob Weisberg. 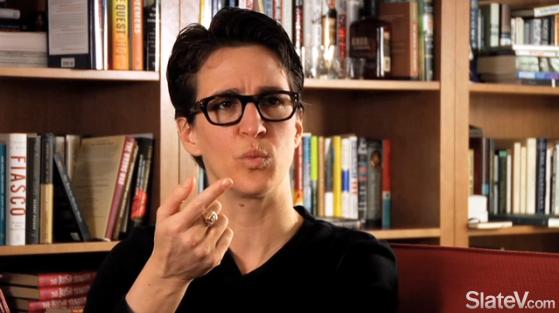 Maddow does most of the talking here, which is okay because as far as I’m concerned she’s always the smartest person in the room. The interview focuses on Maddow’s outlook on the Republican debates. In that oh-so-perfect way of hers, Maddow discusses the pros of having true political debate. She points out that the Republican presidential candidates are not really taking the time to discuss any real issues. “I do not resent political division in our country, but right now one side of it is not holding up their end of the fight,” Maddow says, “I at least want Republicans to be fighting about ideas.” When pushed to get tough on the Democratic party, Maddow doesn’t take the easy way out and simply say that Democrats are not doing enough for gay rights. Instead she outlines the ways in which Democrats are failing as group decision makers.

Yes, in a way [Obama is being incoherent about gay rights], in terms of the way he talks about what he personally believes. I also don’t really care what he personally believes. I care what he does as a politician. So, I think that to the extent that you want to take issue with, um, the Obama administration and gay rights in that case, the president or any senior person in that administration’s personal comfort level or personal beliefs about it, I do not give a hoot. I just care what they’re doing on policy. I don’t particularly care about politicians as people anyway.

Maddow moves on to elucidate the difference between the approaches taken by MSNBC and Fox News. “I think the thing that is under appreciated about MSNBC is that we don’t really do anything as a company,” she says, “that we all sorta get to do our own thing.” Specifically, Maddow points out that MSNBC doesn’t operate with a political objective whereas Fox News operates specifically with the objective to get Republicans that Roger Ailes likes elected to office. Also, the only time Maddow’s ever been asked to come on to Fox News was to comment on the Britney Spears/Madonna kiss at the MTV VMAs.

What I found most interesting was Maddow’s discussion of how she handles editorial issues regarding her coverage of gay rights. I feel like people are constantly asking gay individuals in the limelight if being gay has affected this decision or that promotion. Maddow’s response feels like the one I’ve been waiting for my whole life. She points out, “I’ve never made [editorial] decisions like this as a straight person. I’ve only ever made these decisions as a gay person.” Finally, Maddow talks about her new book, Drift due out in March 2012. Drift is about the history and changes in decision making in the American army and wars. Obvs I’ll be reading it.

You can watch excerpts from he interview below. The podcast of the interview in its entirety is due out shortly.