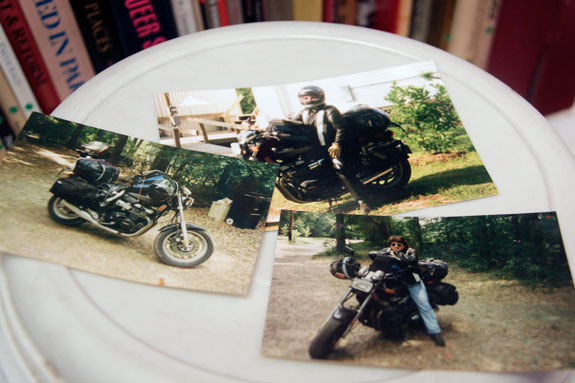 In August of this year I will be hitting the road with two other people to capture footage of a handful of spaces across the US where lesbians and queer women gather. It’s for a documentary project, inspired by a play that I wrote, AND will look at the ways that shifting identities and politics within queer women’s communities are impacting the spaces where these women gather.

Currently called The Unknown Play Project, the documentary grew out of my own experiences volunteering and helping to organize events, fundraisers, and gatherings in a couple of different women’s and queer spaces in New York City. At many points I ended up asking myself questions about who was included in those spaces, who wasn’t, and why they were important to me – what need they fulfilled that every other space I was in didn’t, and what would be lost if they disappeared.

Many spaces like lesbian bars, feminist bookstores, and certain political and community spaces where queer women have congregated across the US are closing, experiencing conflict, or struggling to pay increasing bills. At the same time, new spaces are being created that in many ways reflect new political commitments or identities.

In order to explore some of the remaining and new spaces, we’re going for a road trip in August of this year. You can learn more about the project and help to support us (we need help with gas money & equipment costs) by visiting this site.

In the meantime, I’ve spent a lot of time doing research and one of the things that I’ve found is how often fellow queers have hit to the road to find, learn about, and connect with different queer communities across the US.

One of the first people I spoke to for this project was Alexis Danzig, who in 1996 took a solo motorcycle journey across thousands of miles of the US. Along the way she made 28 stops (give or take – the copy of her itinerary from the Archives notes a couple of changes of plan en route). And at each stop she arranged to give a slideshow and talk about the Archives. She did slideshows in living rooms, bookstores, hidden bars, not-so-hidden-bars, community centers, and one hydroponics shop owned by a Lesbian Avenger. You can watch a tiny excerpt from my chat with her here.

Danzig’s story opened the door to me finding many other stories of pilgrimages taken by other queer women. And each time I’ve encountered such a story I’m struck by how personal and important these journeys have been for the people who took them and for many they visited.

Because of that I wanted to share some of them with Autostraddle readers. Below is just a handful of other projects and journeys I have come across since this project started percolating in my brain. 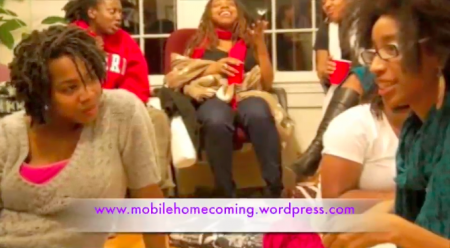 I learned about this project back in 2012, while reading an issue of Bitch Magazine and stored it away in my mind, catching up with it now and again since then. According to their website, “Mobile Homecoming is an innovative and loving response to a deep craving for intergenerational connection.”

In early 2011, Julia Wallace and Alexis Pauline Gumbs headed out on the road in an RV to visit a variety of people and communities in order to gather herstories focused on “black women, trans men, and gender queer visionaries who have been refusing the limits of heteronormativity and opening the world up by being themselves in the second half of the 20th century.”

Wallace and Gumbs have created a variety of media documenting their travels, some of which you can view here. You can also have a look at some of their itineraries here. And, as I’m learning, like many queer travelers, they have developed a deep and abiding attachment to their particular mode of transport, so be sure to learn about their Revolutionary Vehicle here.

This project I learned about while volunteering at Willie Mae Rock Camp for Girls when someone else invited everyone to one of their local events. Co-produced and founded by Heather Acs and Damien Luxe in 2010, this ever-evolving group of artists has now completed five road trips and out of that has grown a monthly artists’ salon in Brooklyn, NY.

According to their website: “Our mission is to use theatre to incite wonder, joy, critique, and dialogue; to bring visibility and complexity to diverse experiences; and to strengthen LGBTQ cultural communities in NYC and across the USA. As a multiracial & working-class led queer organization, we commit to anti-oppression and activism as art, as well as in our art.”

And they too have developed intense love for their mode of transport. Luxe has even written a zine about it titled VANIFESTO: A Meditation on Van Lust, which you can download for free here or purchase print copies of for $5 by reaching out here (for possible roadtrippers, there is very helpful and very detailed info about how to buy and maintain used custom conversion vans in this zine).

This film was screened at the Lesbian Herstory Archives a little while back and that’s when I learned about it. When I and a handful of others arrived it was already too full for more people, so they did a second screening for the rest of us that same night. In it, the creator of the film, Myriam Fougère, takes a journey from Canada down through the US, retracing some of her experiences and relationships from the lesbian separatist movement that began in the 1970s, looking back at a movement that continues in some ways today but is very different for the passing of time. She combines both footage and imagery from her past travels with contemporary interviews and road footage. Learn more on the film’s website (available in both French and English). 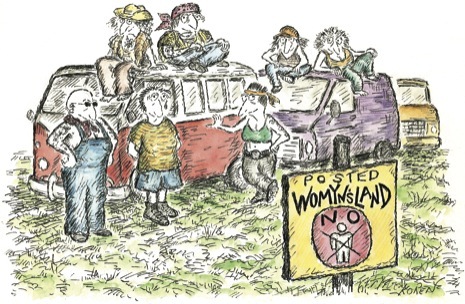 By way of Damien Luxe’s van zine I came to learn about the Van Dykes, a traveling band of lesbians who not only decided to dedicate their lives to living and traveling in their vans from wimmin’s land to womyn’s land, but also adopted, at least temporarily, a new surname honoring their choice. Read more about them in this New Yorker article by Ariel Levy. 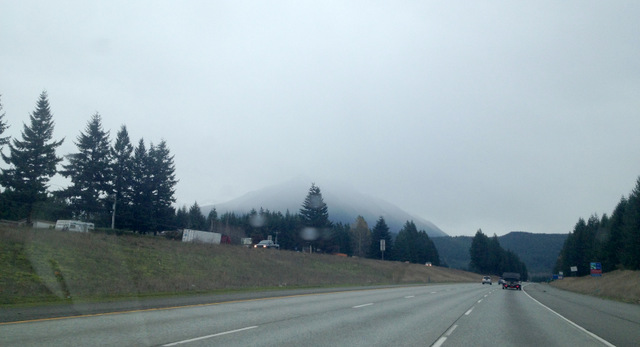 I’ve heard about a large number of solo road trips since starting to think about this project, from people hoping to someday visit the home of their queer icons to those striking out in order to claim power, agency, and space for themselves. Here on Autostraddle a number of personal narratives have been published by people chronicling their solo travels. One of my favorite Autostraddle travel chronicles, written by Amy, begins this way: “I have peed on sacred ground and no deity has struck my hot trans* ass down.” Read the full travelogue, titled “Leaving a Mark on the American Heartland With My Solo Queer Trans* Woman Roadtrip,” here. 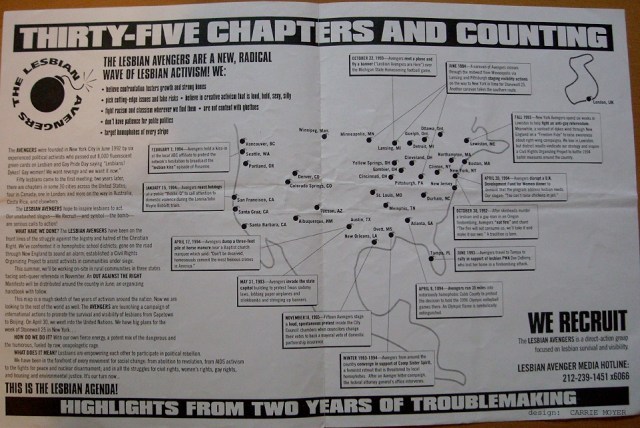 This one I learned about while reading the book The Girls Next Door: Into the Heart of Lesbian America by Lindsy Van Gelder and Pamela Robin Brandt, which is itself a travelogue of the authors’ own road trip (a book I have to admit feeling a little conflicted about, but that’s a discussion for another time). The main point is that they joined along for part of the Lesbian Avenger’s June 1994 Pride Ride. From the Avengers’ website: “One of the most ambitious joint actions, Avengers from all over the country converge on New York for the International Dyke March and Stonewall 25. One caravan of Avengers crosses through the Midwest from Minneapolis via Lansing and Pittsburgh staging visibility actions on the way. Another caravan takes a southerly route, originating in Austin.” Again with the vans, but this time rentals, and with much less love.

Fall (In Love and War)

This project I came to know about only recently and it isn’t represented much at all on the web as of yet, so I don’t have any links to share. A friend connected me to the creator, Kyla Searle, after he heard me describe my own journey. For hers, Searle ventured away from California around the time of Proposition 8 with serious and personal questions about whether or not there was such a thing as a “gay community” after hearing so much talk in the media and elsewhere about the “gay community” wanting marriage rights.

Searle spent a couple of months on the road collecting interviews with a wide variety of same- and multi-gender-loving people (to borrow her language), most of whom identified as female at the time she interviewed them. And from those interviews she has since created a play titled Fall (In Love and War) which just had a reading at New York University earlier this month.

This collection of trips only just begins to scratch the surface of a much larger and longer history of queer pilgrimage, feel free to add your own and others in the comments.

Where would you go on your queer pilgrimage?