by Hannah and Aja

Inarguably the most inclusive and supportive fashion show to come out of NYFW, VERGE: Queer New York Fashion Week at the Brooklyn Museum was a parade of fresh ideas, fresh faces, and queer community. With the stunning Beaux-Arts Court at the Brooklyn Museum as its backdrop, eight queer designers donned their queer, trans, fat, brown and disabled models in an exclusive first look at this season’s boldest, brightest, queerest and most dapper Spring/Summer collections.

Beaux-Arts Hall at the Brooklyn Museum. Photo by Hannah Hodson.

I went behind the scenes to catch the organized mayhem that breathes life into New York’s largest queer fashion week event. Backstage, models carved a nook out of the chaos to get all gussied up in designs by Sun Sun, Not Equal by Fabio Costa, KQK by Karen Quirion, LACTIC, Fony, MARKANTOINE, SAGA by Sandra Gagalo, and Jag & Co.. 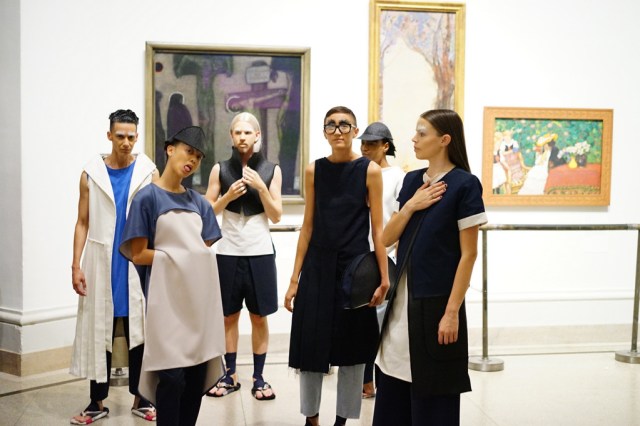 Models wait their turn to walk the runway for Not Equal. Photo via Fit For A Femme

There were some big names on and off the runway. Verge highlighted some of these models in a press release:

Over 70 models who challenge traditional gender constructs took center stage, including celebrity models Rain Dove (the most cast female model during the inaugural Men’s NYFW) and Ryley Rubin Pogensky (one of 17 trans-identified models in the groundbreaking Barneys New York ad campaign shot by Bruce Weber.) Melanie Gaydos, as well as Prince Harvey, the hip hop artist who secretly recorded an album at an Apple store, were just some of the many other prominent models who dominated the runway. 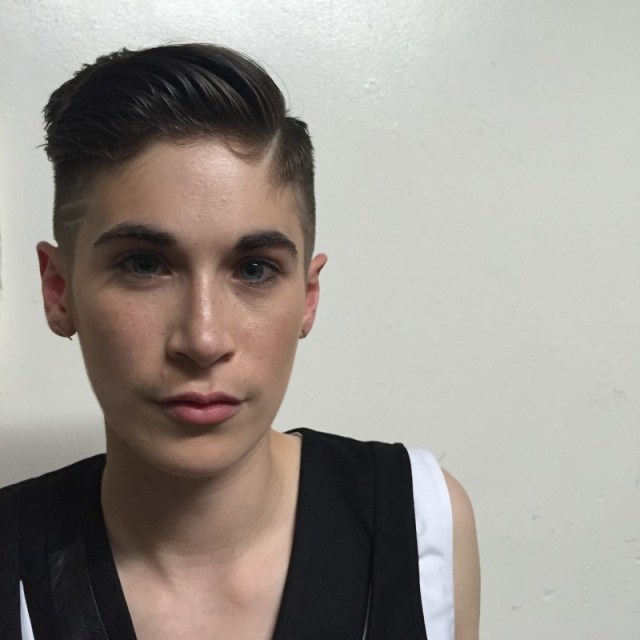 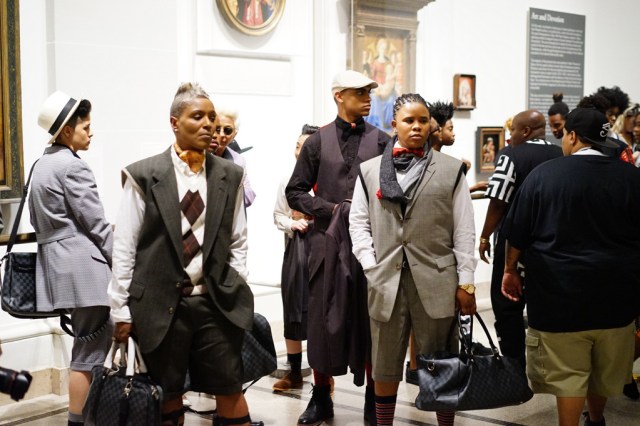 Models prepare to walk for Jag and Co. Image via Fit For A Femme 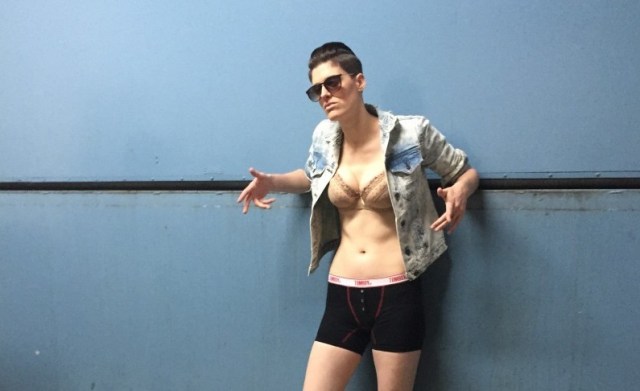 But the true stars were the team behind the production, one of whom was Autostraddle Beauty Editor and Fit For A Femme blogger Aja Aguirre working the runway visuals. The people at Colette Lee Productions managed the runway and provided the hair and makeup team. Producers for the event included Van Bailey and Zahyr Lauren from bklyn boihood, Winter Mendelson and Christiane Nickel from Posture Magazine, and Dina Habib and Danik Yopp from Montreal based D.Y.D.H Productions. 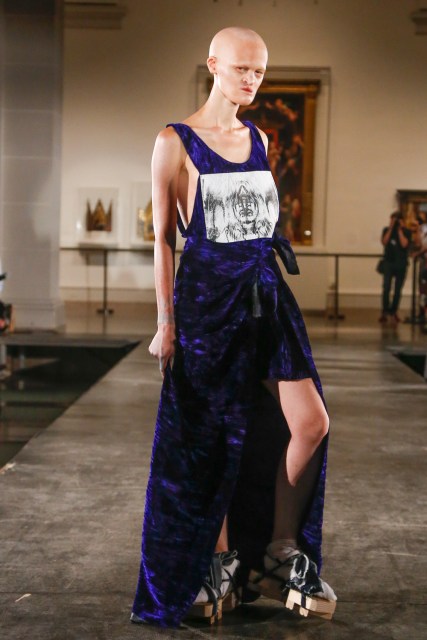 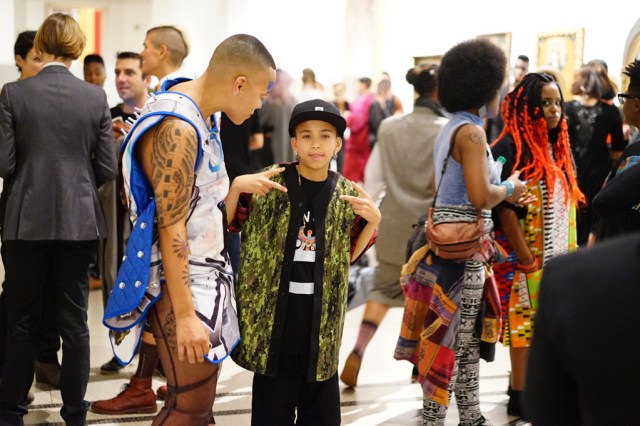 Krishna, 11, walked for Sun Sun. Image via Fit For A Femme 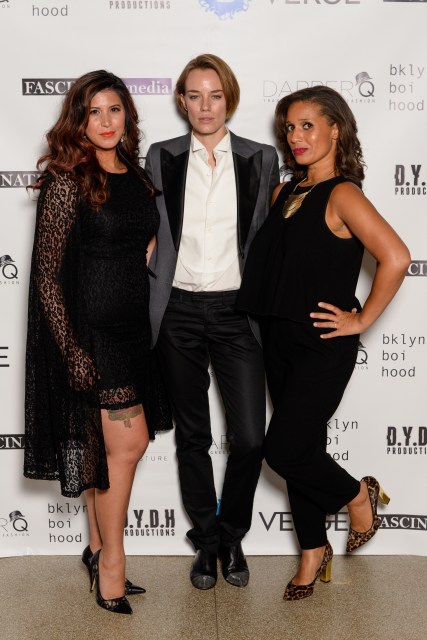 Last and most certainly not least, Anita Dolce Vita and Dez Irani at DapperQ, the brains behind the whole operation, worked day and night to make sure the event was highly accessible (the Brooklyn Museum asks for a suggested donation but won’t turn anybody down due to lack of funds) and highly entertaining, with “How-To” stations doing cat-eye and glitter lip make-overs run by Aurora Wells and Sonam Chandna. 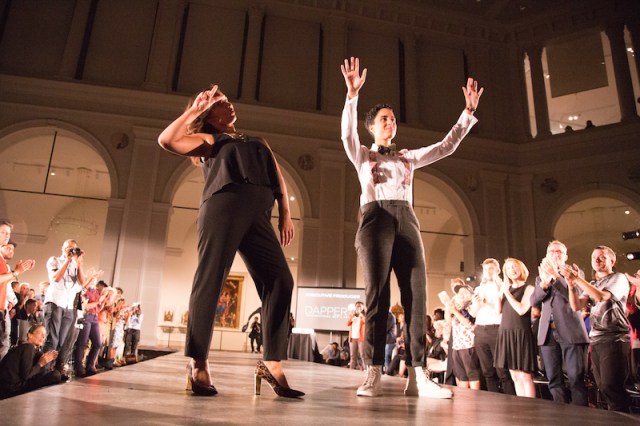 And did you know that Ms. Dolce Vita is a full-time nurse? On top of working tirelessly to bring inclusive queer fashion to the forefront, Dolce Vita spends her days healing people. The same might be said for what DapperQ does for queer, trans and gender nonconforming folks. The ability to live authentically by wearing the clothing that feels true to your gender can be life-changing and even life saving for some folks. Dolce Vita says she uses a lot of her nursing skills to pull off fashion shows:

“Assess, triage, delegate,” she says. “Many people think that fashion shows are easy to produce. They are complete chaos behind the scenes. I utilize many of my nursing skills to make it all come together so that none of this chaos spills over on stage, whether it be coming up with a creative solution to fix a ripped garment on a model minutes before showtime, or troubleshooting glitches in a designer’s music.”

Even though VERGE was not an official IMG Fashion Week event, Dolce Vita says it was included on the CFDA calendar, and that it was crucial this show be seen as professional and as much a part of Fashion Week as any other event: “NYFW is such an staple event for our city and is one of the world’s major fashion weeks. We feel that the LGBTQ community should have a voice in, and be a part of, NYFW considering how mainstream fashion is co-opting our style but not providing space for all bodies to exist in fashion.” VERGE was a one-time collaboration between DapperQ and its producers, but DapperQ has been hosting standalone shows at places like the California Academy of Sciences and Brooklyn Museum since 2013. Last December, DapperQ presented (un)Heeled at the Brooklyn Museum to great fanfare. 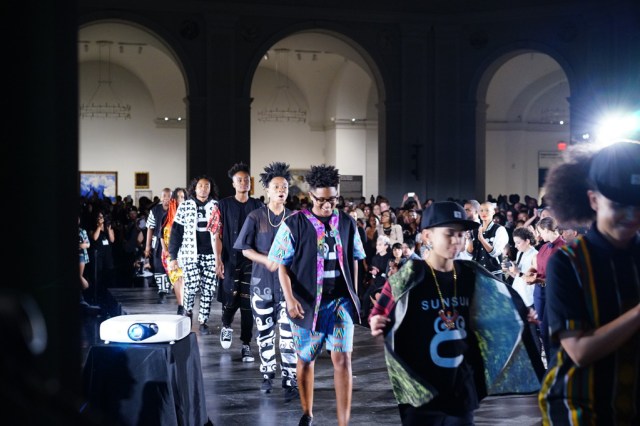 Models take their final waltz after walking for the Sun Sun. Photo via Fit For A Femme. 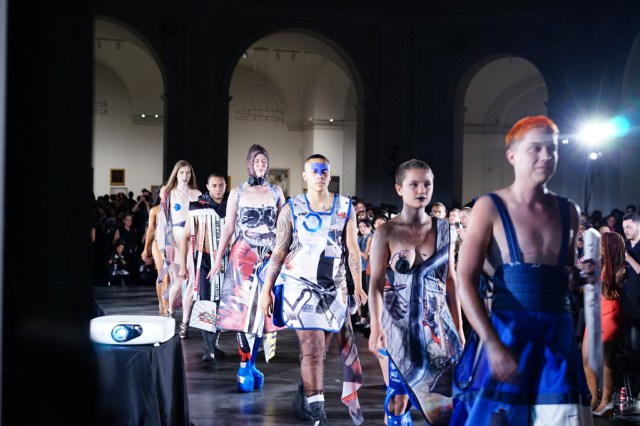 models for LACTIC, the evenings most outlandish line, make their final rounds. Image via Fit For A Femme.

To be perfectly honest, Queer Fashion Week is the only kind of Fashion Week I want to be at; community-creating, gender-affirming, body positive, anti-racist feminist fashion week. Yes, please.