The Morrigan is my all-time favourite goddess and should be yours too. At first I loved her because when I was fifteen and couldn’t tell my ass from a legitimate historical source, I got a Celtic birth charm that told me she was my patron goddess. She’s super goth and I was very into that. But then later, when I got my hands on some actual sources, I realised that she’s the feminist ass kicking supernatural godmother we all need.

Either the Morrigan is a collection of supernatural women who form a terrifying collective/murderous girl band, or she’s the Queen of the Tuatha De Danaan (Ireland’s not-quite-fully-divine race of supernatural beings) with a pack of deadly sisters/subordinates. Or she’s both of these things at once because the divine doesn’t have to be factual and multiple things can be true at the same time (see all of Egyptian myth for that). She stands for war, death, sovereignty and the protection of the community, and spends her free time starting fights and provoking young men into doing stupid things for her amusement. 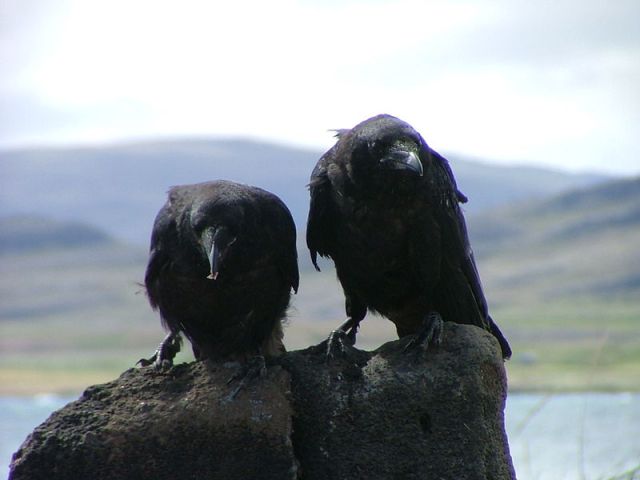 She’s also the goddess of corvids.

We’re used to thinking of the war and death gods as evil, and indeed the Morrigan is considered one of the Dark Goddesses in many branches of neopaganism. The thing is, despite the Christian binaries of dark and light which most of us absorb in infancy just from living in the West, dark is not necessarily evil; instead it’s an integral part of life, and the dark goddesses are who you call on during times of personal darkness. More than that, just as we contain multitudes, the Morrigan has all of life and death inside of her and one is dependant on the other.

That doesn’t mean that darkness or the Morrigan are nice, they’re not; and some of her aspects — the chaos and the violence — are distinctly unpalatable to many modern pagans. There’s a tendency to rewrite some of the more frightening beings as soft and fluffy mother figures, to sanitise those parts of them that aggress against our modern sensibilities, but to do that is an injustice to them, our ancestors and ourselves. The Morrigan is wild and she is bloody, she dances on spear tips and drives people to battle frenzy in the name of glory or entertainment. She quite literally is the washer at the ford. But if you don’t piss her off she won’t forsake you. And in the world she comes from, border skirmishes are a daily reality and full blown conflict is always just around the corner. You can’t protect the tuath (the community and the land, which belong to each other) without a mastery of war.

This protection of the tuath is the essential part of her that’s so often overlooked, and it’s easy to see why. Not only are the war/death/chaos parts of her the most visible and entertaining, we’re also not used to pairing those concepts with protection or safety, which is ironic when you consider the rhetoric around any given country’s armed forces. While she is a full-blown war goddess, capricious, vicious and in love with the spilling of blood, all of this is congruent with her central role as tutelary guardian and queen (her name literally means Great Queen). She ensures the fertility of the land, the people and their animals so the people will survive, and when they’re threatened by outside forces she keeps the people safe.

Recently in pagan discussion groups there’s a tendency to focus on her aspect as sovereignty goddess. This means two things and both matter, especially now. Historically, Morrigan or her subordinates were the King Makers. Irish Kings were elected out of a pool of royal candidates, but none of them could keep the throne without the goddess’ approval. Different kingdoms had different rituals, but most involved the goddess passing the wannabe king a cup filled with red drink to signify her acceptance, and if this was denied then they’d have to pick again (in fairness we have no record of this happening).

Though current thought is that this was entirely metaphorical because as we all know women in history have never had any power or done anything interesting, I have always believed in the earlier theory that a priestess acting as avatar took on the role of the goddess. After all, passing the king a drink is a very tangible action when various metaphors for land marriage could be used instead. The Morrigan, and quite possibly a priesthood of women, were an essential part of legitimising a king’s rule. While we’ve just seen something similar with Trump and white women voters it’s important to remember that the point of this priesthood was to keep bad kings from taking the throne; the Morrigan is exactly who you want to call on right now to help you push back.

To many modern devotees she’s a goddess of personal sovereignty, of the right to rule yourself and your body as kingdom inviolate. There’s an argument to be made that this isn’t historical, that the Irish didn’t conceptualise sovereignty that way, but honestly it doesn’t matter. The issue isn’t whether an ancient people worshipped in that way but whether the modern concept is in line with what the goddess represents, if it’s something she’d stand for and support. I would say all answers point to yes. The Morrigan and her sisters/subordinates have never taken orders from anyone; when she meets her husband it’s rarely and on her terms, for all that he’s a king. She has sex when and where she chooses, she bore a child when she chose and unlike many goddesses, for all that she is a mother and responsible for fertility, motherhood is not her entire divine identity. Also, and maybe it’s just me projecting, but the Morrigan has always seemed wildly queer to me. The sort of army boot wearing femme-butch blend who uses the word dyke like a clenched fist aimed at the patriarchy.

Right now our tuath is in danger; our bodily autonomy and that of our friends and family is in danger. I’m pretty sure if you’re looking for divine backing to help you stand up against that then The Morrigan is your Lady(ies) of choice.