Visitors to Humble Hands Harvest may have to call for directions to the self-proclaimed “queerest farm around.” It’s tucked away at the end of a dirt road in the beautiful Driftless region of Iowa. Once folks arrive, they are greeted with an idyllic scene. Fluffy white sheep dot the pastures, wildflowers blooming around them. Resident cats Gooseberry and Apricat prowl the greenhouse hunting critters. The neighbor’s dog stops to check in on co-owners, Emily Fagan and Hannah Breckbill. Instead of a red barn and white picket fence, guests find a cozy yurt and rainbow flags. The farm hosts monthly volunteer days, potlucks, and an annual gathering for LGBTQ+ farmers called the Queer Farmer Convergence. When I attended the first Convergence in August of 2018, I was hooked by the welcoming and joyous queer community. I returned in 2019 to lead a workshop myself.

When I arrived in 2018, I met the farmers and received a quick orientation by organizer Jac Wypler. After check-in, we sat down to brainstorm workshop topics. The conference agenda was created collaboratively. We pieced our ideas together into a multicolored quilt of sticky notes and came away with a few themes that would guide us for the weekend. We were called to eat, but not before joining in a song. We took each other’s hands, and a chorus of diverse voices rang across the valley. Dinner was a potluck, and the riotous colors of veggies plus the visibly queer crowd made a wondrous scene. We filled four long picnic tables with casseroles of heirloom eggplant, local grass-fed pork, tangy rustic sourdough, seven different kinds of salsa, and of course the Midwestern staple of homemade potato salad. It was one of the most joyful and delicious dinners I’ve attended before or since.

The next day, we split into small groups for workshops. Our options included morning yoga with the sheep, practical farm skillshares, and a tent full of zine-making supplies. I attended a discussion on financial planning and learned about the unique ownership structure of the farm. After lunch, we discussed what it meant to be land “owners” and stewards, especially as a mostly white crowd on stolen land. Many of us worked in sustainable agriculture, using techniques developed by Indigenous peoples, yet we did not have strong connections to Indigenous nations. We discussed the privilege it takes to farm, especially in accessing land and financial support. As Hannah states, “We’re also part of a demographic of young people who have a lot of social privilege, but very little capital. Many of us are looking to do something tangible, something real in the world, but it is a challenge to access the resources to do that meaningful work.” Many questions were left unsolved and messy, open for further contemplation as we traveled home. How could we make QFC a safer and more inclusive space, especially for people of color? How could we build better relationships with Indigenous and Black communities? And could sustainability include our physical and financial health in addition to that of the land? 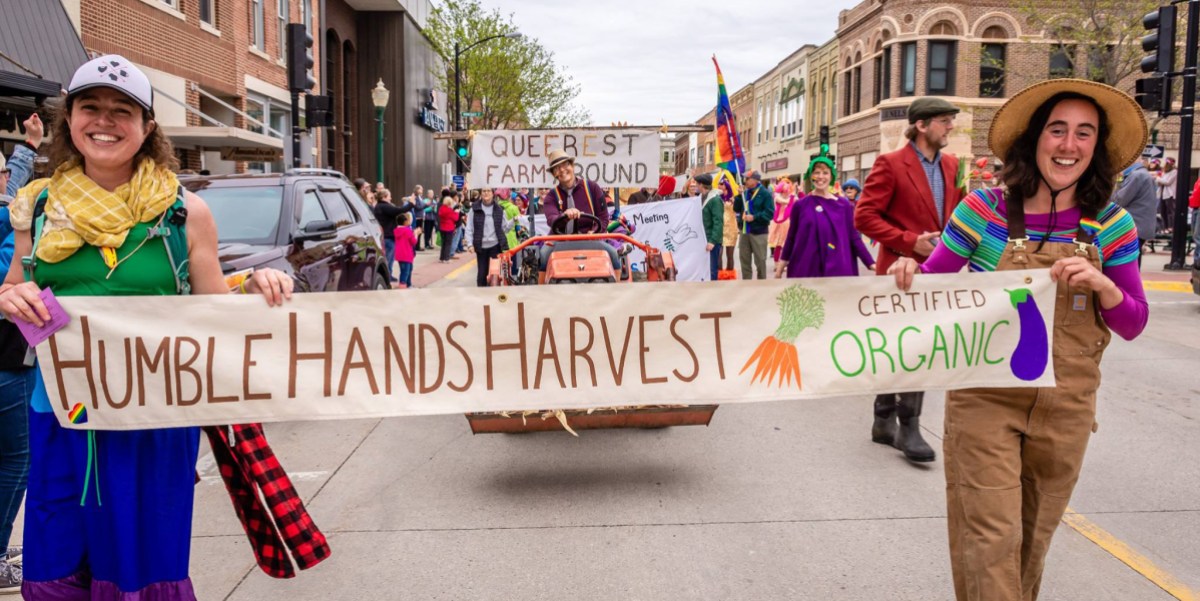 The farmers consider regenerative agriculture essential to being good neighbors and good stewards of the land. The parcel they are on now was rescued from exploitative farming practices by a coalition of neighbors. The neighboring land was slated to house a CAFO until its previous owner stopped the sale in 2013. When the farm went to auction in 2014, concerned neighbors came together to preserve the land from further development. It was purchased jointly by sixteen households and held in an LLC until 2016 when Hannah Breckbill came forward with her plans for a regenerative community farm. Between fundraising and gifted shares, Hannah obtained eight acres and enough cash to build needed infrastructure. A year later, her second-cousin Emily Fagan joined the farm. They created a cooperative agreement, and now the land, buildings, and assets are shared in a worker-owned co-op, making this queer little farm special in more ways than one.

To decentralize ownership, the farm itself owns a share of the co-op. This share, called the Commons, includes the donated land and reduces the cost of other owners’ shares. With land access already difficult, especially for people of color, this ownership structure allows beginning farmers to step into their careers without burdensome debt. Now the farmer-owners are raising funds to retire the well-worn yurt and build permanent housing for themselves and the next generation of queer farmers. Hannah also works with National Young Farmers Coalition and serves on the board of Women, Food, and Agriculture Network. Both organizations work to increase resources and land access for disenfranchised communities and new farmers.

Humble Hands Harvest is well-known throughout the area. The neighbors are accepting and supportive, but farming while queer can still be a pretty lonely experience. The farmers’ work is not just growing food and building soil. They have created an intentionally queer rural space. While farmer mental health statistics have been making headlines, LGBTQ folks in rural communities are often overlooked. Without the resources of urban cultural centers, and surrounded by images of cis-het nuclear family farms, queer farmers sometimes feel invisible. Young queer folks struggle to see themselves or find affirming role models in traditional agricultural communities. Rural queer visibility is essential to preventing isolation and deaths of despair from suicide or substance abuse. Having a network of experienced queer farmers introduces young LGBTQ people to careers they otherwise wouldn’t have known.

Queer and trans people are the land stewards and leaders needed for a sustainable future. In Jac Wypler’s work, she studies how lesbian and queer farmers have carved out spaces for themselves in conservative rural areas. Queer farmers, especially women landowners, have led the way for sustainable and organic agriculture in the US for decades. The way LGBTQ+ folks interact with agricultural systems is heavily informed by our lived experience as “other,” and these perspectives give us strength. As Hannah said when she reflected on QFC, “If we’re going to thrive despite climate catastrophe, we need to massively transform the way we think and act in relationship to each other (economically) and the earth (ecologically). Re-thinking relationships is one place where queer folks have unique expertise; meanwhile, sustainable agriculturalists are the most essential people to thriving human systems.”

Dismantling these systems of agricultural exploitation goes hand-in-hand with dismantling capitalism and white supremacy. When we stop seeing ourselves as separate from the land, we start protecting it. Because of their experience with oppressive systems, white queer farmers tend to understand the need for solidarity with communities of color. Queer and trans people of color are leading the way in sustainable agriculture across the country. Addressing the systemic issues in agriculture is an uphill battle, but by breaking up large monocultures and diversifying our food system, we create opportunities for small farmers and disenfranchised communities.

Each QFC I have attended was a unique and sacred space. Humble Hands Harvest hosts events year-round, but this temporary community of queer folk from across the world is extraordinary. Attendees have compared the Convergence to the fruiting of a fungus. We had been dreaming of something like this for years, sending out our hyphae, building mycelial networks, and waiting for the proper time to emerge. As I write this in 2020, the COVID-19 outbreak has put the Queer Famer Convergence into hibernation. Though we will not gather in person this year, the spores of queer kinship persist, and we will fruit again when conditions are right.

Hawthorn has written 1 article for us.