You thought we were done with Promgate 2010 headlines, didn’t you? No. ABC has announced that it’s developing a movie based on the saga of Constance McMillen and her girlfriend’s being denied attendance to their high school prom. The movie is being headed by Craig Zadan and Neil Meron, two openly gay producers, and it will be written and directed by the creator of Ghost Whisperer. Yeah, I didn’t really know that was a show either. (@ontopmag)

There are, obviously, many questions remaining. Who will play Constance? Will there be a homophobic Regina George character? Will Dan Choi have a cameo? Isn’t Pretty Little Liars also on ABC? Are they trying to tell us something? Will this ABC Family Original reach the same heights of cinematic excellence as the other ABC Family Originals Revenge of the Bridesmaids and The Dog Who Saved Christmas Vacation? I don’t know, you guys. This probably means something – in the wake of very real tragedy that makes the Constance McMillen story seem weirdly prophetic on top of mean-spirited and awful, this probably is a sign of something, the way the wind is blowing, etc. I can’t figure out what that thing is. It’s over my head. This was the month we had to make “gay bullying” a tag and I’m through processing it. Hey, who else thinks Ellen Page should play Constance’s girlfriend, I KNOW YOU WERE THINKING IT TOO.

Hey, you know who loves lesbians/has only begun categorically denying that she is bisexual in interviews in recent years? It’s Pink. You guys, she has a lesbian wedding in her new music video for the single “Raise Your Glass.” You may remember her from the other music video in which she has sex with herself. Yes, I know. This lady has our best interests at heart, and we appreciate it. (@foreign)

Speaking of really gay universities, UCLA has a gay sorority now! It sounds pretty cool, in that it’s actively defying the common understanding that a Greek organization is by definition sexist and homophobic. Its founder says that it provides “a place to belong to, a place to call home,” and when you think of it like that, it is a) exactly what all sororities should be, as ‘sisterhoods’ and b) exactly what most gay kids need. Party on, Gamma Rho Lambda, party on. (@jezebel) 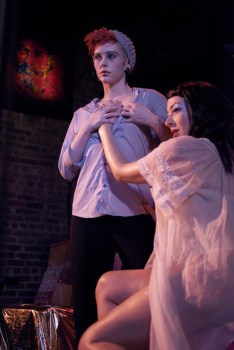 I have nowhere near the intellectual or emotional reserves to process this, but I give it to you in case you are different, in case you are in a place in your life where this speaks to you. This is a lesbian burlesque rendition of Twilight. I guess in a certain way it was inevitable, but in another sense, this is one thing I thought I could make it through life without ever having to grapple with. I think they did the one where she’s pregnant and everyone is crazy and there’s like a womb-rupturing demon baby? I don’t know. Someone help me out here. Why is Lesbian Edward’s hat so cute. (@io9)

This is a video of a cute girl making herself look like Jared Leto. I realize the connection to “girl-on-girl culture” is tenuous. In my defense, the video title says “cute girl” and Jared Leto was in Girl, Interrupted, which is gayer than my women’s studies discussion section, and one time, years ago, Riese wrote an essay titled Why Shane is the New Jordan Catalano, and also this is drag, you guys love that right? Mostly though I just really like time-lapse videos of people performing weird beauty rituals, idk. The soundtrack is Nine Inch Nails but I recommend muting it and playing Kaki King instead, that worked really well for me. (@jezebel)

Did you know that Lady Gaga once appeared on the Sopranos? Me neither. She was fifteen and it sounds made up. Luckily there’s video to prove it!