This was not a fun Pretty Little Liars episode. Mostly it was just really stressful. Plus, it was light on gay content this week so Riese isn’t doing a recap. Once you finish sobbing I’ll continue. 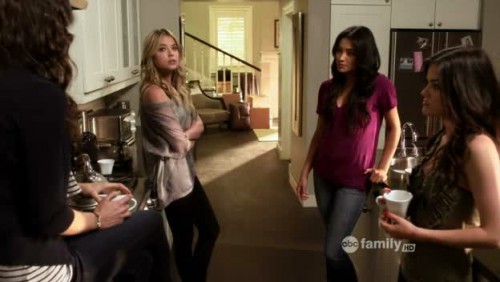 ON WEDNESDAYS WE WEAR PINK

This week, Emily’s mom was away filming a Jenny Craig commercial, so Emily and Hanna moved in to the same room. A is psyched about this because now when they share clothes she can totally call them out about it at school! Wouldn’t that be totally embarrassing if everyone knew they were sharing clothes? Totally. 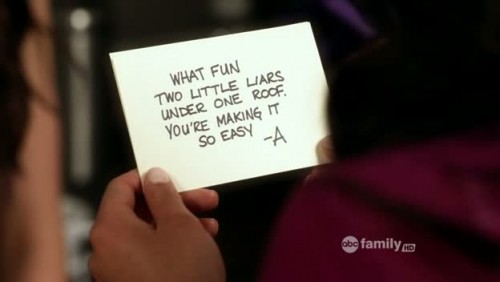 AT SOME POINT SHOULDN'T THEY RECOGNIZE A'S HANDWRITING?

Even though the liars were just gathered drinking coffee, now it’s the beginning of the day at everyone’s houses. 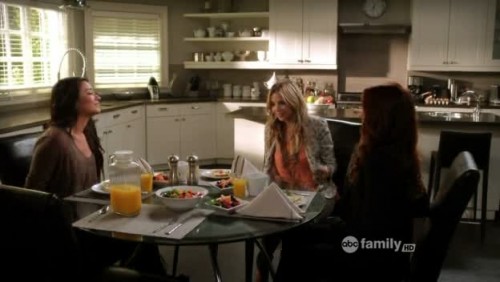 I'LL JUST SIT HERE WAITING FOR YOU TO SHOWER ME WITH PRAISE.

IF EVERYONE IS WEARING FALL COLORS DOES THAT MEAN IT'S ALMOST FALL?

More importantly, Aria is wearing a really cute dress. When the top is like that it’s called a V-Neck surplice or a wrapped surplice. With a short but full A-line skirt, this cut can be extremely flattering with a belt. 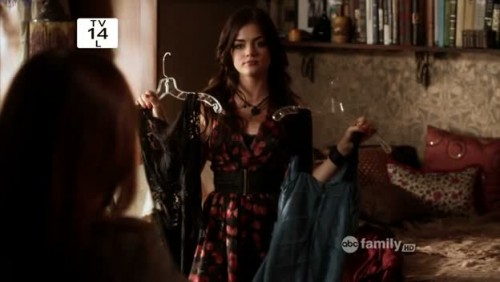 If you’re the dress wearing sort, I suggest you invest.

At school, Caleb Has Feelings about illegally tricking out electronics. 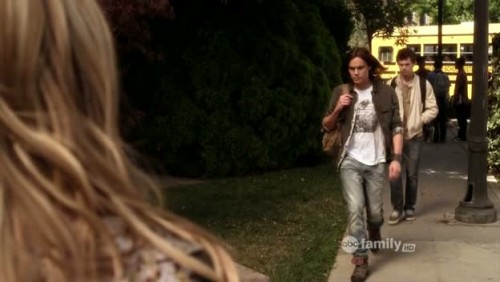 THIS IS A TERRIBLE, HORRIBLE, NO GOOD, VERY BAD DAY

I have feelings about how blah all of the school outfits were and whether Caleb actually just asked his hair stylist for “The Tina Fey.” 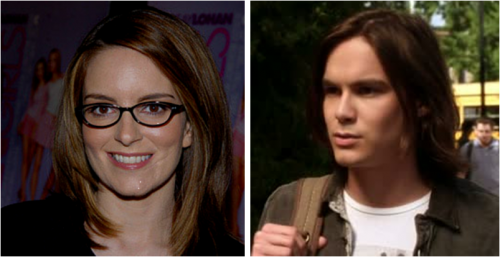 Spencer isn’t at school because she’s busy showing off her cute American Apparel dress to Tobey. He’s impressed but distracted by the sheer amount of wood he was able to cut in one day. 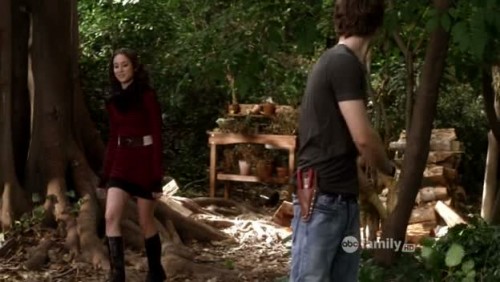 THIS IS MY "OUTDOORS" OUTFIT

Aria shows back up at school to remind us that time isn’t real and to find out from her mom that she invited Jason to dinner. For once I’m not too distracted by the fact that Aria’s mom is Piper Halliwell to notice that she has a really cool and a little bit gay bracelet on. 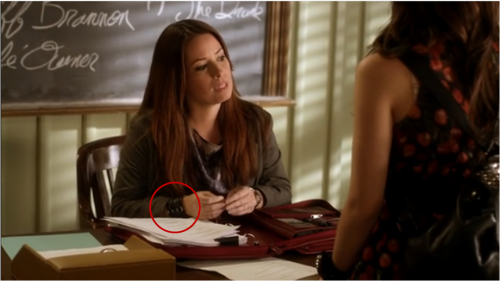 HER MOM DRESSES ALMOST AS CUTE AS EMILY'S MOM. ALMOST.

The next day, Spencer tries to catch up with the Bad Cop. 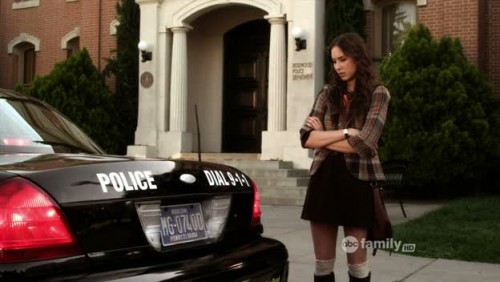 We know he’s a bad guy so we’re not surprised when he doesn’t even comment on Spencer’s cool Knited Dove sweater and blazer. That’s right. sweater AND blazer. Spencer is definitely dressed for autumn, so maybe it’s fall already and the girls just go to school year round.

Later Aria’s mom and Hanna’s mom (whose names, apparently, are Ella and Ashley) meet up so they can combine their suspicions that someone is messing with their kids and complain about how Pam always looks cuter than they do. Both are really upset about how Peter Hastings is being a rich creep, but mostly it’s the Pam thing. (Yes, I had to look up all these names.) 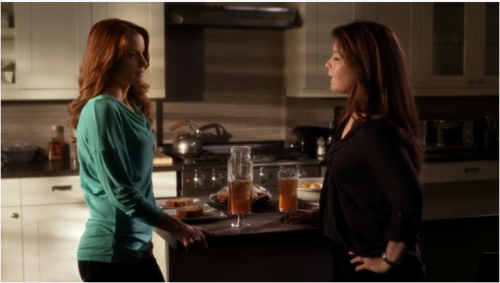 HOW DO YOU DO IT? BECAUSE WHENEVER I WEAR A COWLNECK IT JUST SORT OF FLOPS AROUND.

In anticipation of Ezra and Jason’s arrival to the dinner party extravaganza, Aria puts on a really adorable little black dress. Seriously though, how many short black dresses does one sixteen year old need? 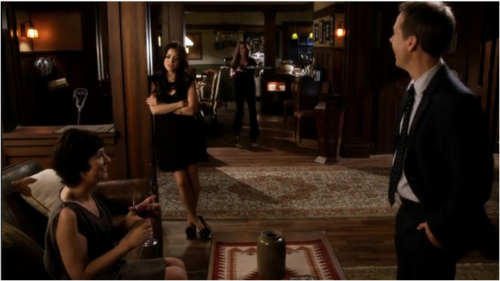 DOES THIS MAKE ME LOOK 8-10 YEARS OLDER?

In case this little shindig wasn’t awkward enough already, the cops show up and say Mike (Aria’s absent brother) has been arrested. 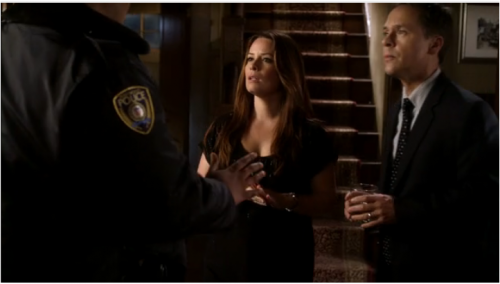 Ezra and Jason decide to make it even weirder by wearing The Same Outfit. 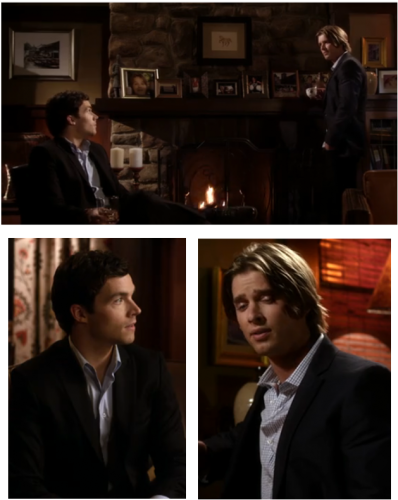 IT WAS ON SALE AT J. CREW

Over at Hanna-Emily land, Emily’s been having a tough time studying. I think all the giggling, loud singing and mysterious death threats are really distracting. 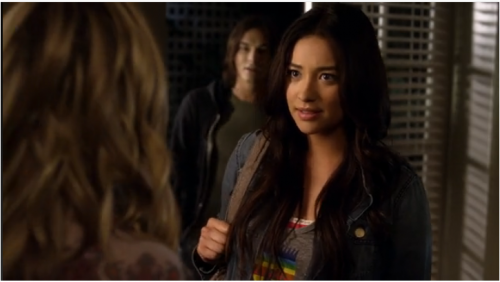 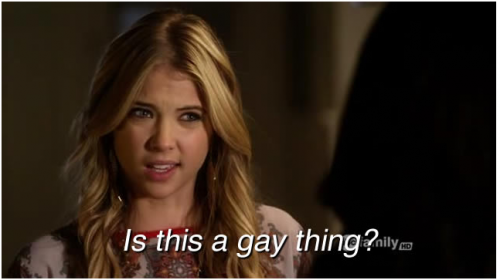 This question is hilarious and also viable because:
1. going to the library is indeed kind of a gay thing (just ask Rachel K.)
2. Emily is dressed way too hot for studying. You know what I study in? The gym clothes I haven’t changed out of since morning. I wish that were a joke.
3. Emily’s Truly Madly Deeply tank top has a legit rainbow on it

Over at Spencer’s house, Spencer busts her dad about to burn a field hockey stick that Tobey found buried in her yard. Spencer’s like, “Bro! Don’t tamper with the evidence!!” And her dad’s all “Fuck the police! We don’t need any more evidence” 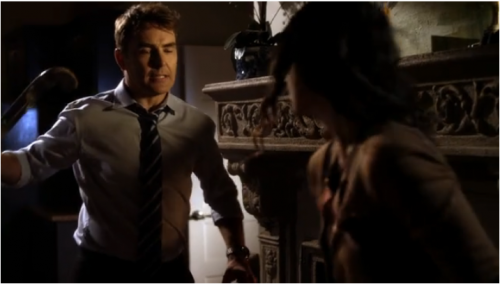 I'LL NEVER LOOK AT A FIELD HOCKEY STICK THE SAME WAY. THE GAY WAY THAT IS.

We know that Spencer’s dad means business because his tie is loosened. Alternatively this could mean he’s Tony Stark. You guys, that’s some professional costuming advice right there.

Also, Emily is probably being drugged. I vote that it’s Paige all pissed about Samara. She’s actually been in the last few episodes, just wearing her invisibility cloak. 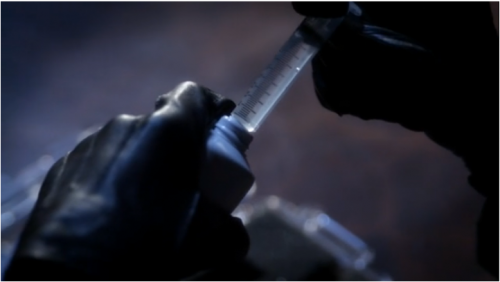 THIS IS NOT CONSENT