Previously on Pretty Little Liars, the Liars dealt with the fallout of being trapped in Charles’ underground hellscape for three weeks, in their own ways. Emily helped herself to her dad’s guns, unloading bullets and rage at paper dummies down at the shooting range. Hanna stripped her room to the barest walls and sat on the floor and stared at the violation and processed it like a metaphor. Aria, who at some point in the dollhouse decided to shoulder exactly zero percent of Ezra Fitz’s bullshit going forward, went full-throttle Spencer while wearing a dress that said “Stop Men!” Spencer glared at everyone, especially her mother for refusing to fill all her prescriptions, and yelled at Ali for a little while about how her family is all Gargamels. And Ali met another age-inappropriate cop named who made it gross immediately. 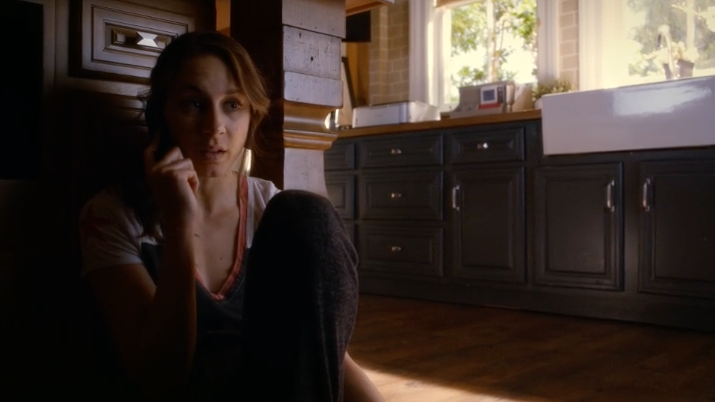 I’m hiding from Orange Is the New Black spoilers. If you don’t watch the first weekend, you’re screwed. 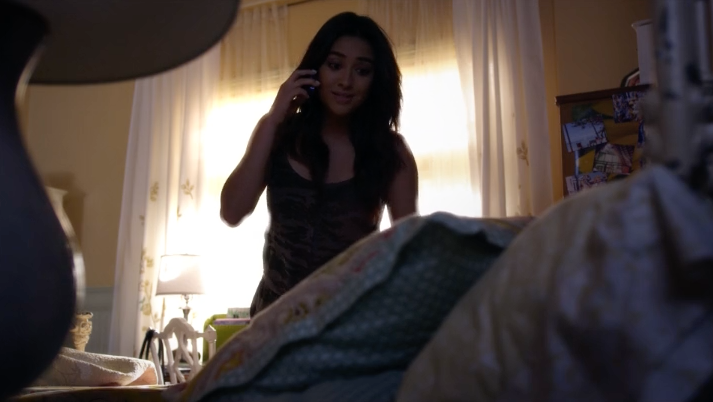 And that’s on straight Twitter. Imagine how hard it is for me to stay unspoiled!

Spencer is tucked away in a corner of the kitchen we’ve never seen before, just huddled down there like a helpless little lamb while her mom sleeps on the couch, guarding the pain pills. Remember that episode when Spencer told that story about how good she was at hide and seek in the most psychotic way? Like staring out the window and it was lighting and her voice was growly about how she used to destroy Melissa’s life playing hide and seek? I think that’s when I knew for sure I would marry Spencer Hastings. And that’s what I thought about when I saw her all scrunched down here, like maybe this was one of her hiding spots from the days of yore.

The Liars do a phone chain for their daily debrief of the facts.

Emily: Well, Sarah — who, just by the way, takes about ten showers an hour — says Andrew isn’t Charles, even though she never heard Charles speak or smelled which Axe body spray he uses.
Spencer: #NotAllMen, Emily! Toby doesn’t bathe in Axe body spray! Caleb doesn’t!
Emily: Whatever. A lot of shit has happened to me, but at least at the end of the day, I’m gay.
Spencer: So Sarah says Andrew doesn’t have a Charles vibe?
Emily: Yeah. To be honest, though, she seems pretty messed up.
Spencer: Don’t date her to make her feel better, Emily.
Emily: Fine.
Spencer: I’m serious.
Emily: I said fine! Anyway, who is going to tell Aria about Andrew? 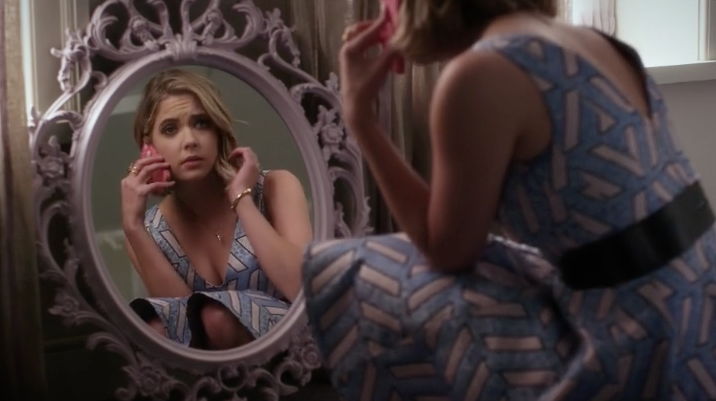 Mirror, mirror, on the wall, who’s the gayest of them all?

Hanna: Aria, Andrew isn’t Charles.
Aria: He has to be! I am so tired of getting murdered! I don’t want to get murdered anymore! If Andrew is Charles, I’ll never be murdered again!
Hanna: Shh. Honeybun, I know. We’ll talk about it at school.
Aria: HOW ARE WE STILL IN SCHOOL?
Hanna: Aria, take your Xanax and let’s go. Calculus in half an hour. I’ll see you there. 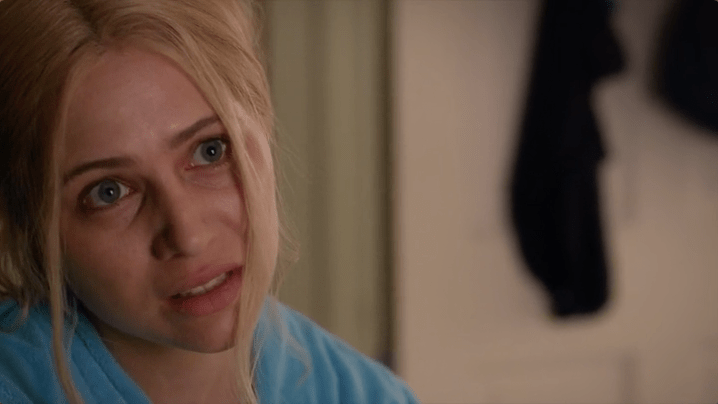 Your mom’s not going to make you go to school? 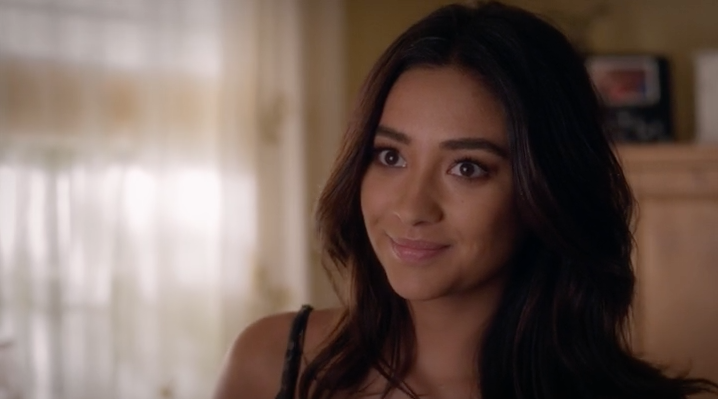 Sarah gets out of the shower, and gets real squirrelly about Emily leaving to go to school. Does that mean Sarah has to go back to school? Is Pam mad at Sarah for not going to school? Does Sarah look feral? Emily almost answers yes to the feral thing — like she and Aria are somehow morphing into people who could activate some super twin powers and become a mega robot version of Spencer — but she swerves at the last minute and says mostly Sarah just looks like a lost puppy. Then, in a move that is going to come back and bite her like a literal feral cat, Emily gives Sarah a burner phone. Just. Come on, Emily. “Here is unsupervised access to all my shit, a way for you to communicate off the grid, and also how about some french toast and mimosas?”

At the Brew, Aria is cleaning her camera gear for like the eleventh time in two days. Her lenses get more baths than Sarah. Ezra wanders over and offers her some breakfast comfort food, and says she can spend the whole day just hanging out in his office if she wants. He says, “You can write.” And she snaps, “No writing!” So he offers her a million other options, like reading or organizing the kitchen or alphabetizing his mail or polishing her knives or taking a nap while he  makes sure no one stabs her in the face. 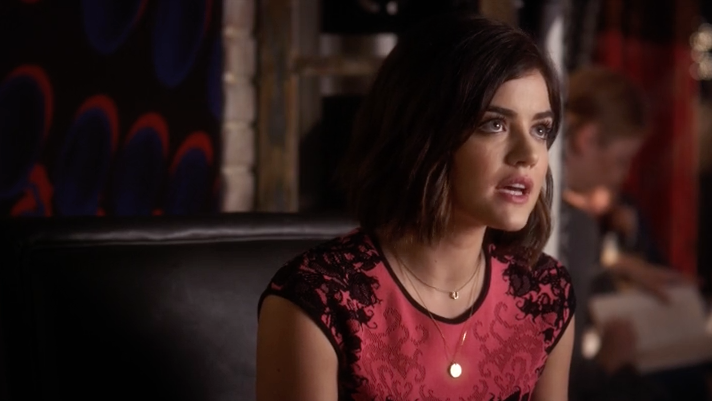 Are you fucking kidding me? 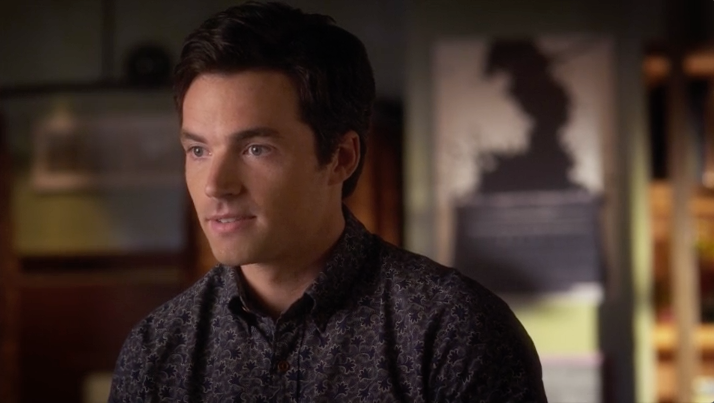 There’s a lot of crafty framing in this episode. (Norman Buckley directing Joseph Dougherty’s writing is always such a treat. It’s as layered as you want to go.) I won’t overwork it; maybe I’ll talk about it on Tumblr later. But: See how Aria and Ezra are pushed to the edge of the frame in the direction they’re talking, how there’s no leading room like the standard way you’re supposed to film this stuff. Like above with Emily framed right and looking left, and Sarah framed left and looking right. That’s comfortable to your eyeballs and brain. It’s the rule of cinematography when it comes to conversation. But Ezra and Aria don’t have any leading room between them.

So it makes you feel kind of creeped out, right? Kind of uneasy? You’ll see it again with Hanna and Dr. Sullivan in a minute. The Liars are experiencing a disconnect and a discomfort trying to relate to anyone who wasn’t in the dollhouse. And also, that negative space behind Aria (and later, behind Hanna), your brain is sending you panic signals when you see that, because you know (without knowing you know) that Norman Buckley is showing you that empty space for a reason. So you’re like, “Who’s going to step into that space?! What are they going to do?!” Your brain doesn’t know if it’s a metaphor or if it’s murder.