Aria pays a visit to Ezra to tell him about Ali and how out-of-hand everything suddenly seems. She doesn’t mention how Spencer wants to go to the police, but it doesn’t seem intentional? Which is weird to me. But Ezra decides he wants to talk to Ali and make sure she doesn’t implicate Cyrus for this crime that didn’t actually happen, but Aria makes him promise to stay away from the situation. LOL, Aria. LOL. 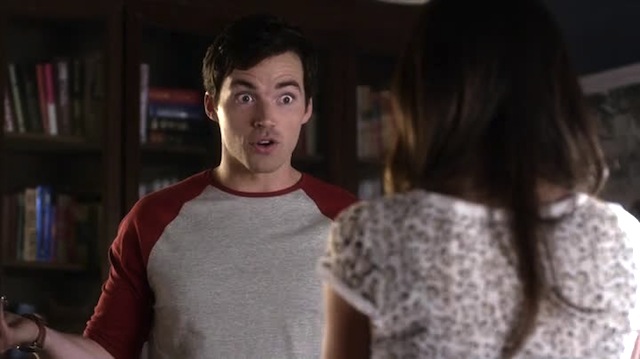 Emily and Ali are hanging out at Ali’s house, and Emily asks how long before Ali’s dad gets back, but it’s not so they can bang, which is admittedly disappointing based on the lack of lesbian action on the show since Paige melted into the mist or something. No, Emily just wants to keep having the same conversation over and over: 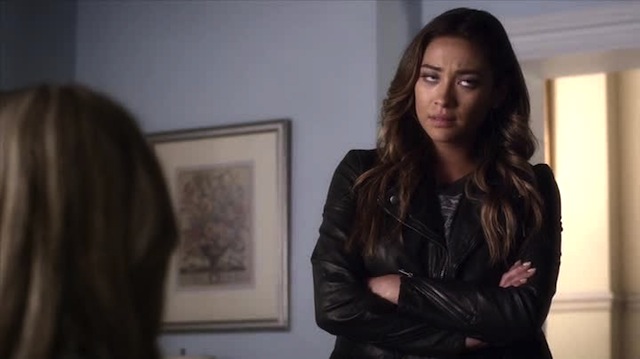 Oy with the poodles already

Ali says Cyrus isn’t some random dude, though, because he gave her a scar on her leg! The situation is a purposely muddled, but we know that he was horrible to Ali.

Ali: He didn’t want me. He just wanted my stuff… my money. And the way he looked at me… Like I was nothing to him. Worse than nothing.

A series of flashback images flash quickly on the screen, but I don’t want to put them here because they’re kind of uniquely terrifying. But Ali really is in a basement, and Cyrus really is attacking her, albeit with other people around and decidedly not in the context of a kidnapping. 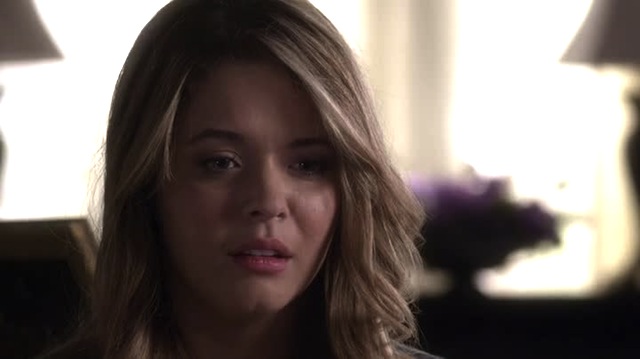 And then Emily The Tone Deaf tells her that she can’t tell the cops he kidnapped her because it’s still not true, which is good advice but definitely not what Ali needs right now.

Later, Emily bounces into her bedroom only to be greeted by Spencer, who is splayed out on the floor with the stalker pictures of Ali laid out in front of her. 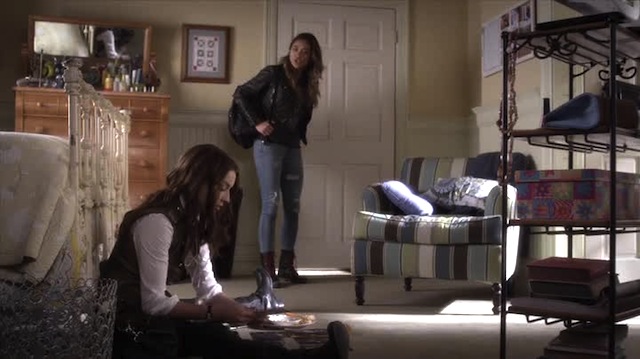 Hey, so Cosmo did a thing about lesbian sex positions, so I’m ripping them out so we can see them without making sure the magazine is open to the right page.

Emily is on a rampage and tells her 1) to get the pictures out of her house since they’re a magnet for danger, 2) that she is diametrically opposed to going to the cops about everything, and 3) that Ali isn’t going to implicate Cyrus and plans on waiting for the cops to just let him go without giving an answer either way. You guys, I’m worried about Emily. Ali is warping her perspective in a way that can’t possibly end well. 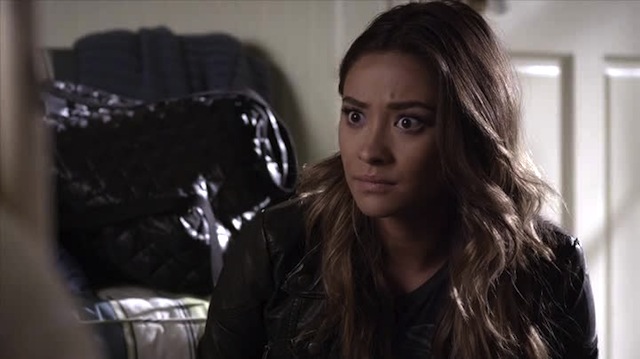 WHAT DO YOU MEAN AUTOSTRADDLE BRUNCH IS THIS WEEKEND

Back at the Brew for some reason, Ezra runs into Ali. He’s about to walk away and keep his promise to Aria but instead decides to press his luck and do the opposite. He tells her that “a lot of people have supported you, done whatever you’ve asked, gone along with all your stories,” which is weirdly open to interpretation, and then scurries away when Ali’s dad returns. And then he runs into Aria! DOUBLE WHAMMY! 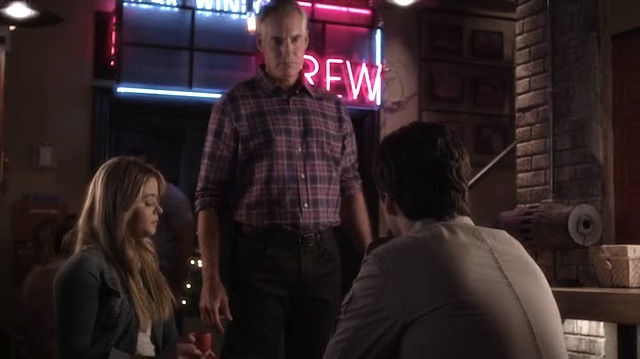 In the parking lot, Aria rips him a new one for talking to Ali because “once (Tanner) figures out that (Ezra) and Alison are connected, it is over.” Ezra apologizes because it’s really not a big deal at all? But Aria keeps yelling because she’s a child and because she’s having a hard time dealing with the end of her mom’s engagement. 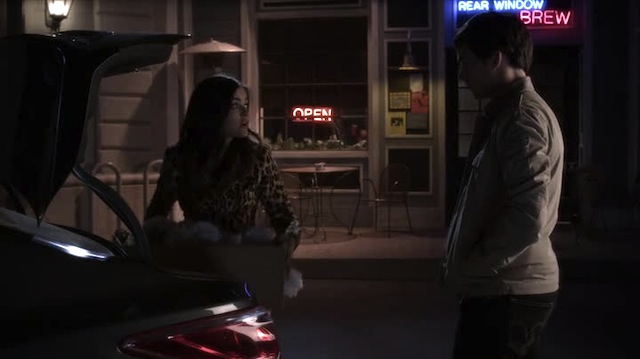 And how DARE you talk shit about the Cheetah Girls in front of me!

Later, Mona is out for her nightly scanning-for-discoverable-blue-tooth-devices drive around Rosewood when Hanna hops into her car! Hanna flips out and starts peppering Mona with questions, specifically questions about how she set up Cyrus to take the fall. Mona says it wasn’t her but that she’s trying to figure out who it was, which Hanna responds to by being bad at technology and forcing them to team up likes it’s the last season of Battlestar Galactica or something. 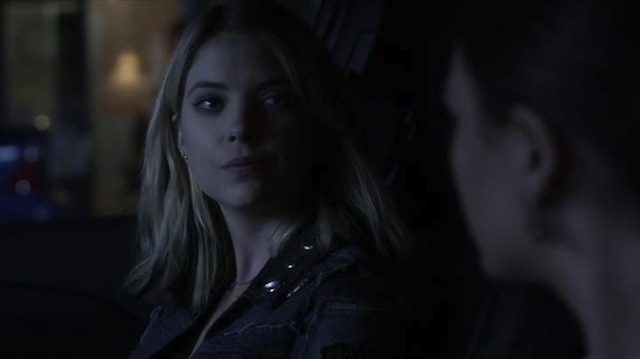 Mona gains listening access to Tanner’s cell phone as the dynamic duo watches Ali and her dad leave the station. Hanna urges Mona to follow them, but Mona is like “bro, chill, I’m really good at this shit” and tells her that they’re going to follow Cyrus instead.

Back at the Hastings homefront, Melissa is busting Spencer for snooping through the barn for answers. 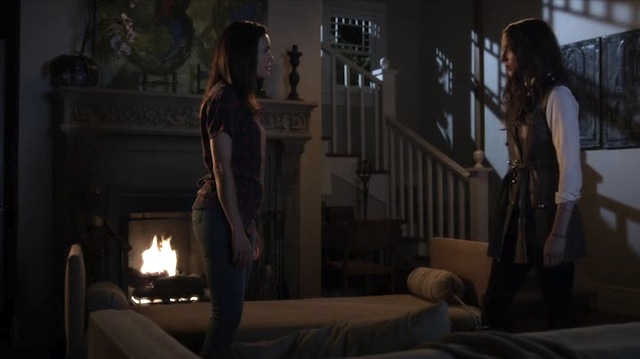 Who will ever call to say “I love you?” Send me flowers or a telegram?

She admits to helping Mona in order to prove that Ali is still toxic ala Britney Spears and says that it’s not safe for her in Rosewood anymore and that Spencer should come with her to the Emerald City. 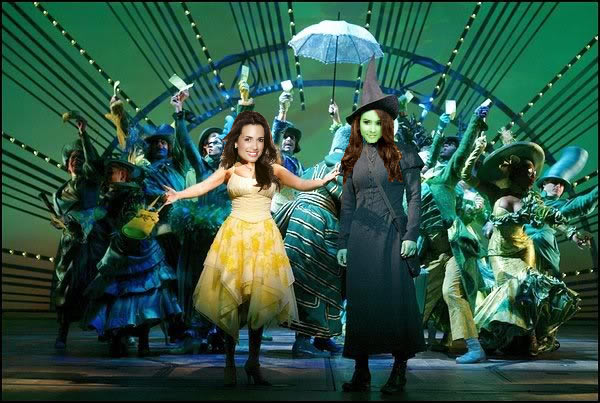 So it turns out Tanner was taking Alison and her father to the basement that Cyrus identified as the place he kept her locked up! Holy shit, this seems like such a mean thing to do to someone who says they were kidnapped. 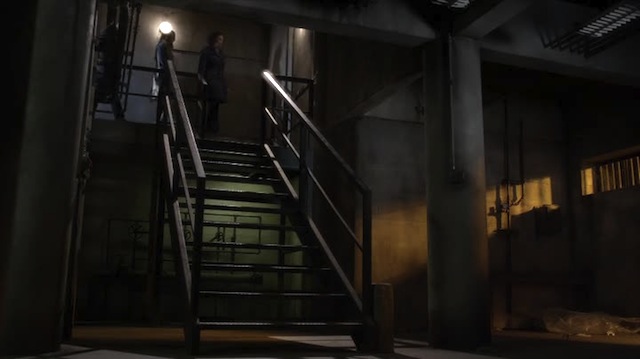 As Ali looks around the room, we get a full flashback about what happened. Flashback Ali introduces Flashback Cyrus to her then-roommates. Cyrus and Ali are holding hands heterosexually. Then Flashback Ali wakes up and sees Cyrus stealing her bag. She fights to stop him, but he stabs her in the leg and runs away with one of her roommates. 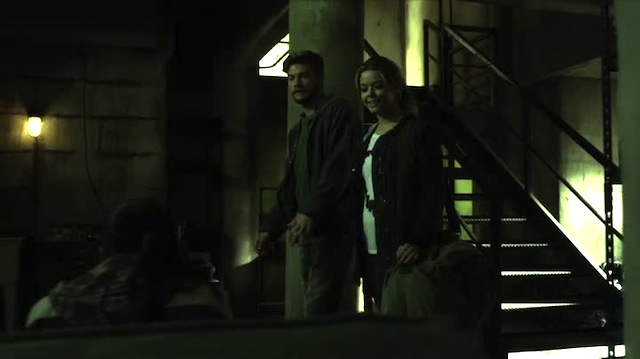 Tanner: You remember this place?
Ali: I could never forget it.

Back at the Mars Investigation stakeout, Mona and Hanna exchange unfriendly barbs while they wait for Cyrus to be released. Mona admits that Ali is giving her real, actual panic attacks, and that’s why she’s been on the offensive. 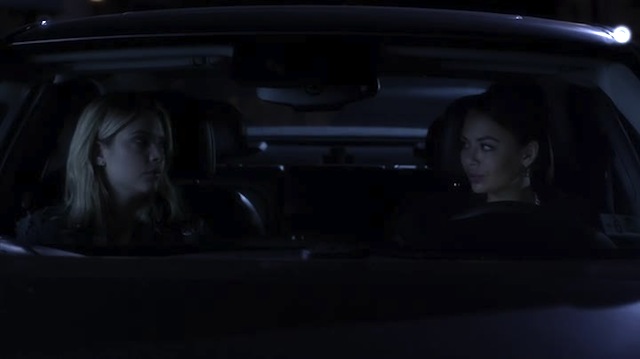 Hanna gets a call from Caleb because no one ever texts unless they have to; she lies and tells him the audition went well and that she’s with her mom. Before Hanna and Mona’s stakeout can evolve into a full-on tryst, they hear Tanner on the radio saying not to release Cyrus. Yiiiiikes. 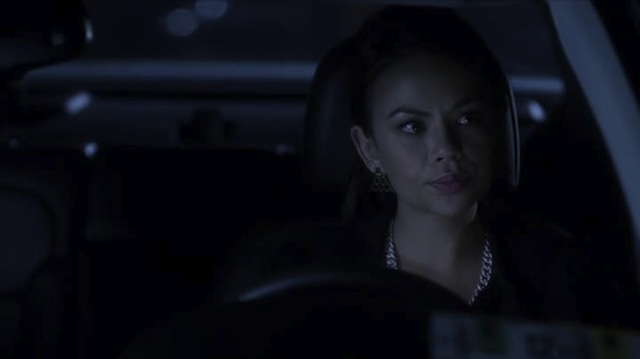 Well, I read on Autostraddle that scissoring it totally a thing, so I don’t see why you won’t at least try it.

Then we hop in our Irony Police cruisers and head on over to Aria’s house so she can bare her soul about Ezra The “Good” Pedophile while comforting her mom about Zack The Bad Pedophile. It’s, I don’t know, heartwarming? It’s clearly supposed to be heartwarming, anyway, but the irony is really too much. Ella is cheering for Aria to work things out with Ezra because “Zack is not gonna write the book on relationships in this family.” 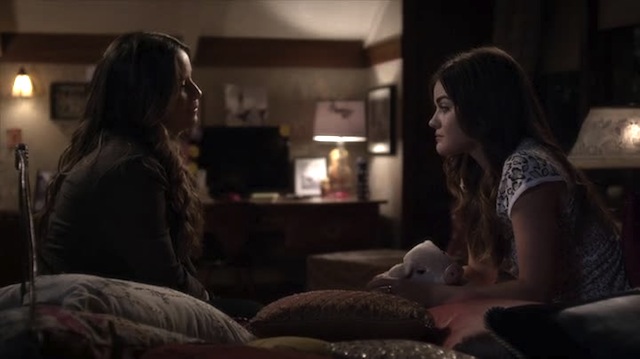 These people stress me out.

The moment is interrupted when Aria gets an SOS text about Alison identifying Cyrus as the kidnapper.

Alison and her dad arrive at home, but Emily is right there to meet them. Emily’s taken a page from Paige’s book and has a speech prepared for Ali, and it’s amazing, so I’m just going to transcribe it for you. Just bask in it. It’s so liberating.

Emily: Ali, I thought we were in this together.
Ali: We are.
Emily: No. We’re not. Whatever “A” has planned affects all of us, not just you.
Ali: I waited as long as I could. Everyone was looking at me, being in that place. You weren’t there, Em.
Emily: When? When wasn’t I there? When Hanna broke her leg because of “A”? When I almost died in an elevator because I was trying to find out who killed you? Or when Spencer had to check into Radley because of everything your disappearance put us through? The past several years haven’t been easy for any of us, but what makes it okay is that we stick together. We don’t turn on each other.
Ali: I have a plan.
Emily: Oh, I’m sure you do. The problem is you’ll throw us all under a bus just to pull it off. I stuck up for you against Paige, against Spencer, against everyone. I wasted so much time on you. 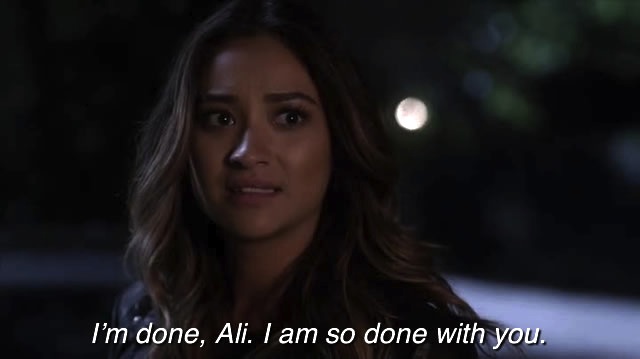 Hanna and Caleb share a nice moment that solidifies their relationship for us, and even though Hanna says Spencer’s plan of going to the police is a bad one, I still like this scene. They look like goofy, supportive puppies together, which is nice. 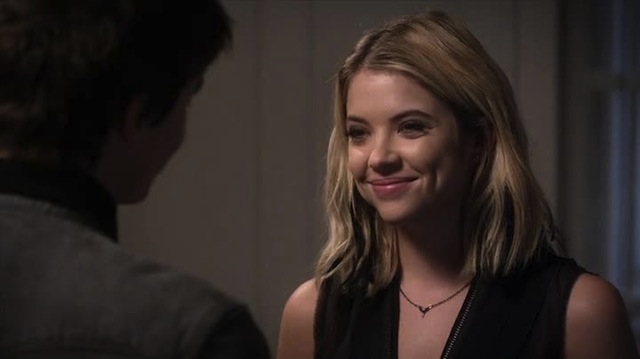 Hanna is all smiles when she walks back into the room with Aria and Spencer, which Spencer finds concerning because no one should be happy, ever. Emily sweeps into the room saying WE HAVE TO CUT TIES WITH ALI LIKE RIGHT THE SHIT NOW, and Aria is like OH COME ON, but no one really states a plan of action. 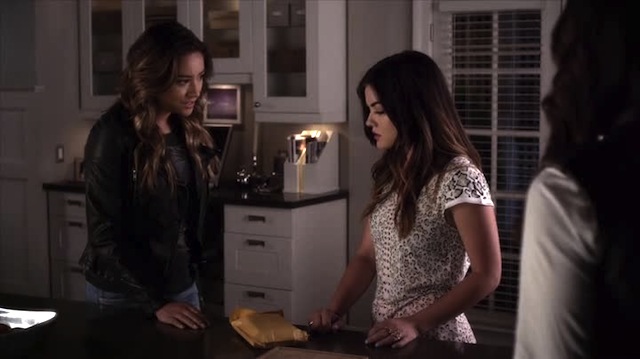 Cyrus is standing in the woods when a brunette approaches. There’s a moment when it seems like it’s Melissa, but IT’S ACTUALLY ALI! The whole thing was a set up that she orchestrated, duh, and now Cyrus is looking for a plane ticket out of the country to avoid getting arrested. Ali says something cryptic about how they “both win.” Totally believable coming from someone wearing a wig so no one recognizes her. 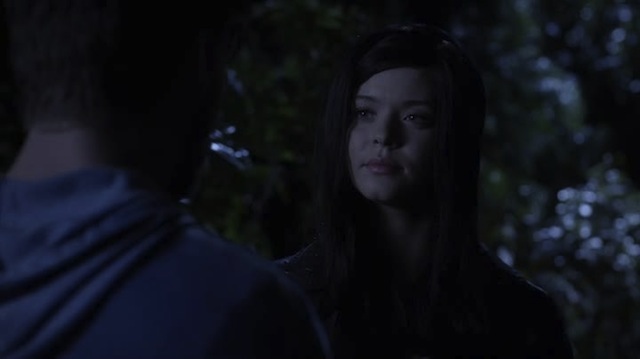 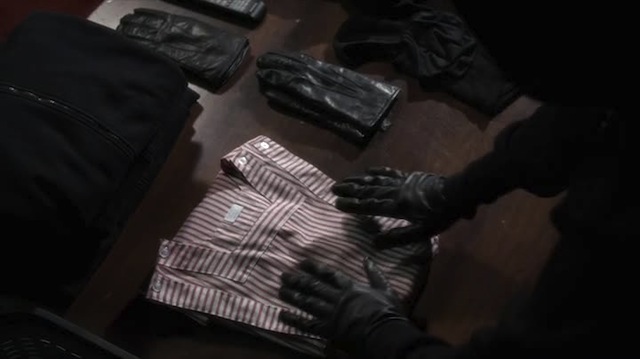