This past Saturday I had the rare and special opportunity to see a play called Post Traumatic Super Delightful [PTSD]. Rare, because there are only two performances left to be seen in NYC, but it was special for a number of reasons. PTSD is a one-woman show that uses humor to traverse the complex and frightening terrain of sexual violence on college campuses. Using a silent clown narrator to break the silence around personal and community trauma, playwright/performer Antonia Lassar tells the story of a campus sexual assault through the voices of a professor, Title IX coordinator, and a perpetrator. Though the performance itself tells a singular narrative, Lassar explains that the characters are actually an amalgam of stories she collected through extensive interviews with victims, perpetrators and faculty who have dealt with campus sexual assault. 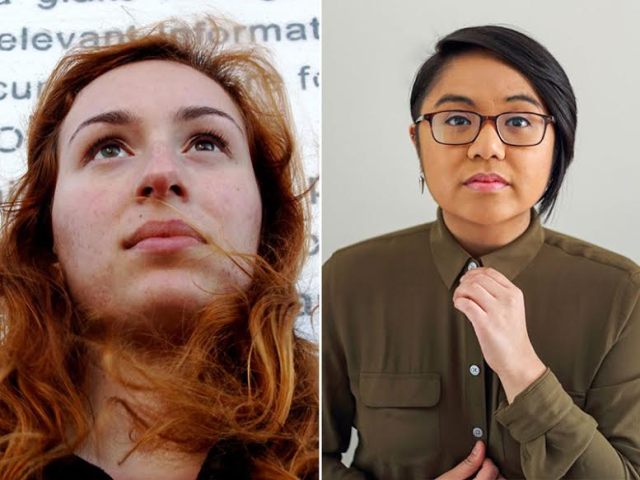 Lassar was introduced to clowning in Boston University’s acting conservatory program where she received her BFA in Theatre Arts, and continued practicing with the Barrow Group in NYC. But, she says, “I studied (bunny quotes) in my bedroom.” When asked if the production has received any negative feedback for using humor as a vehicle to discuss such a taboo subject, Lassar says they haven’t, not yet, “but we’re prepared for a reaction like that, which is why we make sure to include resources in the program and we make sure to market ourselves very clearly, because we don’t want to trick anybody into coming to a play about sexual assault who doesn’t feel ready to come to that play.” And in fact, they take special care to ensure audience members that they are free to leave the performance at any time without judgment. When they take the show on tour to rape crisis centers and college campuses, Lassar says they hope to have a Title IX coordinator or crisis counselor present at every performance as a liaison. 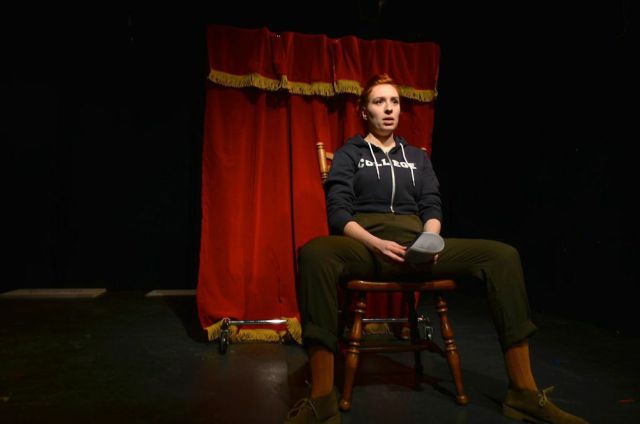 Antonia Lassar as “Bryan” the rapist. image courtesy of PTSD

Watching Lassar’s riveting performance — jumping effortlessly from Russian diva and Title IX coordinator, Lena, to alleged rapist and “southern gentleman,” Bryan, to the nervous and defensive professor defending him — the victim, Julia, is notably absent. In this world, Julia has refused to give an interview, probably for fear of her world falling apart even more than it already has. Given Lassar’s truthful and empathetic performance of Bryan the alleged rapist, one might begin to wonder just who this performance is trying to target, survivors or the community at large? “Both,” insists Lassar. “I think that both survivors and communities get different things out of it. I think that to target an audience of survivors is to emphasize the cathartic healing moments.”

These are represented in the silent clown, who is quite clearly an abstracted interpretation of Lassar herself. “And that came out of a ton of interviews with survivors, [where we] talked a lot about the pressures of fitting the survivor identity. And so, the clown is responding to that pressure… The interview moments speak more to community, because I also don’t think that community trauma has been addressed at all in the conversation around sexual violence.” Many people think this is as it should be. Why should we care how a perpetrator or community is feeling, when the victim is the person who has to live the rest of their life with this trauma? Lassar is concerned about the reproduction of sexual violence in a system that values loose punishment over healing — that includes healing for perpetrators. Lassar recalls the Hollow Water Indian Reservation’s solution to community trauma: a form of restorative justice that requires the perpetrator to sit down with the victim’s family, their own family, and the larger community to hear testimony on how their actions respectively hurt each group. Given that many of the people advocating for rape victims are the same folks who advocate for prison reform or abolition, it seems counterintuitive to suggest that we send rapists into prison where their behavior will likely reproduce itself in other harmful ways. Lassar thinks that because college campuses already deal with incidents of sexual assault outside the judicial system, it is the perfect testing ground for restorative justice techniques.

Angela Dumlao, PTSD’s director, has watched this play blossom over the course of the year:

This piece has evolved a long way to what it has become now… So, Lena the Russian character… before she became Lena the character she was a standup bit that Antonia used to do… I saw her do it before I was even on the team. So, that joke Lena makes in the beginning, ‘nobody wants to talk about sexual assault, god forbid we talk about the violence I went through, no let’s make sure you’re okay first.’ I watched Antonia slay that at an open mic. So even though we’re telling the story of Julia, I think there is a meta commentary going on about your [Antonia’s] survivorship.

Dumlao makes it clear that although the narrative arc of the play focuses on the case of “Bryan” and “Julia,” Lassar’s experience is the lifeblood of the entire piece.

Lassar and Dumlao are very vocal about the privileges that enable Lassar to put up this play: she is cis, white and able bodied: “the perfect victim,” and she has never named her rapist, which allows her to talk about her rape without being accused of lying. The characters in her play don’t necessarily have all of these privileges. Julia, the victim, is under enormous pressure to file a Title IX complaint against her rapist, which will inevitably result in unwanted publicity and further trauma, expressed succinctly by Lena in a moment of exasperation and anger: “What is point of justice, if victim is still hurting?” The hope is that through vocalizing our experiences, laughing about them even, we can begin to heal. Lassar recalls trying to talk about her own rape:

I like to approach my own trauma through laughter… What was interesting was that the natural impulse to want to laugh about it, and laugh with other people about it, was really hard to do. It was almost impossible to find somebody to laugh with! Because they were often so traumatized by hearing that I was a survivor that they totally shut down from laughing… Like faking tears when I talked to people, when I wasn’t sad! I just knew they would be able to hear my story better if I looked really sad.

She does want to make it clear, however, that her healing process has involved clowning and laughter, but “that’s not to say that everyone’s does. I don’t wanna make it sound like laughter needs to be in everybody’s healing process.” 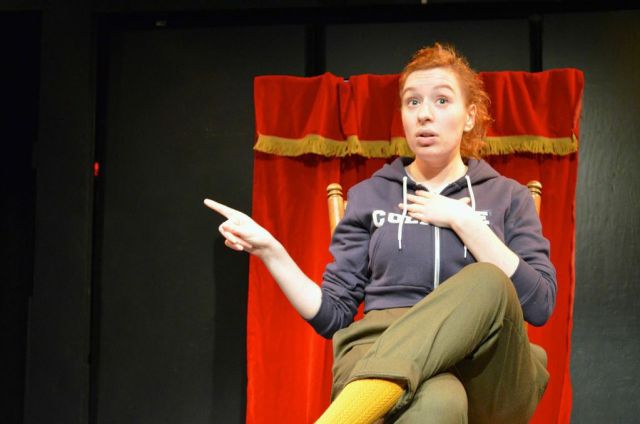 Laughter itself may be a privilege Lassar can afford due to her status as white and able bodied, a concession the performer/director duo are adamant about making. “The movement #TheresNoPerfectVictim started trending on twitter recently,” Dumlao tells me. “It’s just the idea that there is no one narrative for the survivor and usually the narratives we hear are of white, cis, straight, able-bodied, class-privileged women. And there’s this amazing article on Al Jazeera about disability and survivorship that we’re obsessed with. It’s the best article we’ve ever read about sexual assault.” The two of them are gushing over Azmat Khan‘s recently published article, The Hidden Victims of Campus Sexual Assault: Students With Disabilities. The piece chronicles a six-month investigation into sexual assault on Gallaudet University campus, a university specifically designed for students with disabilities. According to Khan, the journalistic investigation “uncovers troubling allegations from students who said their disabilities made them targets for sexual assault; that their experiences reporting that abuse were complicated by factors like disability, race and sexual identity; and that in some cases, sexual assault was even the cause of a disability, such as depression.”

Most disturbingly, but unfortunately least surprisingly, we learn that one year “Gallaudet University received 18 reports of what are known as ‘forcible sex offenses,’ according to crime statistics required by the federal Clery Act… And Gallaudet’s forcible sex offenses rate — more than 11 per 1,000 students, according to a ‘Washington Post’ analysis — was the highest per capita of any federally funded university with more than 1,000 students in 2012.” The piece clearly lays out the ways in which students with disabilities, along with other intersecting factors are at the highest risk for sexual assault with the fewest options for recourse.

Lassar and Dumlao hope that their performance will not be seen as an attempt to singularize the survivor experience, but open a dialogue that includes the experiences of sexual assault survivors from every walk of life. “We had been addressing this idea of ‘What is perfect survivorship?’ and now it’s become part of the national conversation,” Dumlao says. “And it’s been so exciting to directly address it… Hopefully because this dialogue is happening and we feel like we’re on the cusp of this conversation, people will understand how complex it is and how the survivor has no obligation to be what anyone wants them to be.” In a few weeks, Lassar will be traveling to Rice University in Houston, Texas to develop the post-show discussions and workshops that will become a part of every performance.

To fund their US and Canadian tour, PTSD will soon be launching a crowdfunding campaign. “We want to make the play as free as possible for [rape] crisis centers,” says Lassar. They officially start their tour at Rice University in May, pit stop at the Minnesota Fringe Festival at in the first week of August, then make their way up to Canada for the Edmonton Fringe Festival. They are still in the process of booking colleges and crisis centers, but you can always check their website PTSDtheplay.com for updates, and information on contacting the team about booking the show for your very own college or crisis center. Follow the play on Twitter for more instant gratification. There are two performances left in NYC, as part of the FRIGID Festival. Performances are Wednesday March 4th at 5:30pm, and Friday March 6th at 8:30pm at the Kraine Theater. Get your tickets HERE. 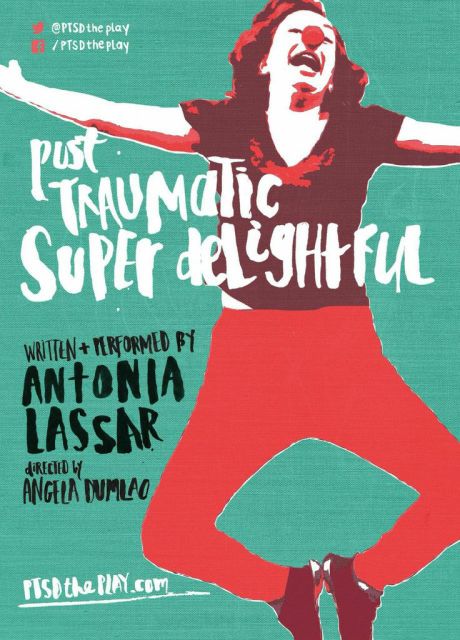