It’s your weekly Pop Culture Fix! I’m Carmen and I will be your trusted tour guide on this summer’s day. Please keep hands and feet inside the vehicle at all times!

+ “I Hadn’t Known Myself Before I Had Sex With a Woman” Lauren Morelli talks Tales of the City with E. Alex Jung over at Vulture, and she talks about Samira Wiley a bit, too. 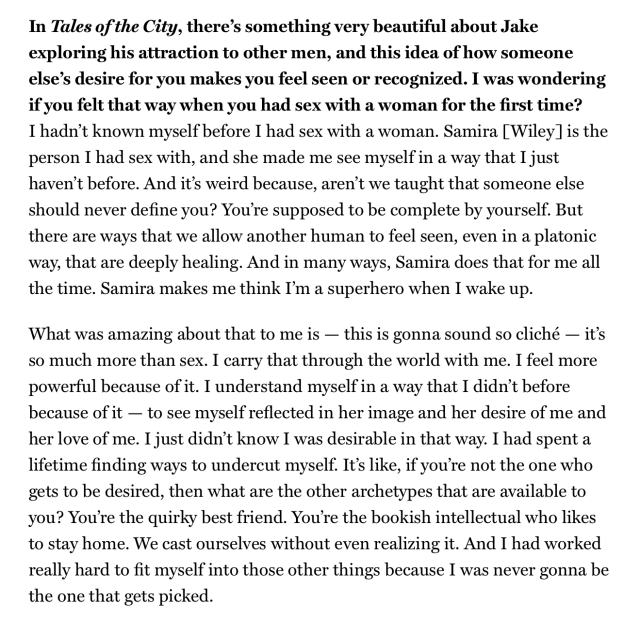 (Want even more Lauren Morelli? Well, did you read our interview with her that came out just last week?? Did you? Get on that!)

+ While we are on the subject, here’s 10 Black LGBTQ Heroes Who Need Biopics. Get on it, Hollywood, immediately.

+ You’ve probably heard this incredibly hot news by now, but just in case – “The L Word: Generation Q” Has Cast Four Attractive Humans To Play Some Gay Parts. Read it if you want some blisteringly funny Riese Bernard commentary.

+ Jill Soloway and Margaret Cho Talk “Unbelievable Relief” of Post-Weinstein and Louis C.K. Hollywood. To paraphrase our very own Drew Gregory, as if the Transparent set was super safe for its employees against sexual harassment in 2017. Sure, Jill. (Since we’re already here, Jill Soloway is also going to replace Bryan Singer on that Red Sonja movie. I hope this means Trace Lysette gets to play the lead!)

+ The Upside Down Speaks in the New Stranger Things Trailer!

+ ‘My So-Called Life’ 25 Years Later: Claire Danes and Wilson Cruz Look Back. Want to do some more looking back on the last 20 years of baby gays on TV, both My-So Called Life and otherwise?  Oh hey, wouldn’t ya know it, the TV Team did a roundtable on that very subject!

+ “Discovering gender freedom improved so many aspects of my life. But it didn’t make it easy to audition or win dramatic roles.” Vida star Ser Anzoategui wrote an Op-Ed about being a non-binary actor for the The LA Times. (You should know going in, Ser disapproves of the title that the editors selected, even though they are proud of the piece.)

+ From Caroline Framke at Variety, How TV Failed Me on Bisexuality — And Then Got Its Act Together. And related reading from The AV Club, Bi Erasure Is a Problem on TV as in Life, but One That’s Gradually Improving. That AV Club piece has this whammy of a line: “Mia Kirshner played a bisexual psychopath on 24 and The L Word” WOW.

+ I Couldn’t Help but Wonder, What If “Girlie” Shows Did the TV Revolution’s Invisible Labor? For Mother Jones, Becca Andrews in conversation with Emily Nussbaum about her new book.

+ Did you like Wine Country? How does a Paula Pell fronted murder-mystery comedy series sound to you? Because that’s a thing that’s happening.

+ Hey Reese Witherspoon, Tig Notaro Wants to Clear Something Up!

+ MJ Rodriguez made you a Pose-inspired playlist, for all your streaming needs:

+ You know the Broadway musical Prom? The one with the lesbian kiss? The memory of Santana Lopez be damned, Ryan Murphy is making it into a Netflix movie and it’s going to star Ariana Grande and Meryl Streep!

+ This is very cool news!! Grace Ellis is writing a YA Graphic Novel about Lois Lane for DC Comics. And it’s going to be illustrated by Brittney Williams! You might know Brittney from our Saturday Morning Cartoon series and Grace will always be our forever intern, Grace Ellis (and you also know Grace from Lumberjanes, obviously).

+ Have you played this game yet? A twitter thread that’s actually a “Choose Your Own Adventure” to being Beyoncé’s assistant. Don’t get fired!

+ Sunday night was the BET Awards and, like every year, it left me thinking about the ways that “mainstream award shows” love to showcase black talent for audience views, but have little respect for the actual depth of black culture. BET is not the best when it comes to queer politics, still I return to it year after year. This piece is from a few years ago, but gets to the heart of why: The BET Awards Are Still Essential to the Black Pop Culture Zeitgeist

+ This trailer premiered at BET and I don’t know if Queen & Slim is going to be gay, but it’s written and produced by Lena Waithe. If you keep your eyes peeled, you’re going to see Indya Moore!

+ PS: The newest Orange is the New Black trailer dropped today. I have very little to say about this show anymore, but take me seriously about this:

If, at the VERY LEAST, Taystee isn’t saved by The Innocence Project and let out of that f*cking jail before it all ends…. If Piper gets to breathe fresh air…. and Taystee is left behind bars…. I’m going to riot.

+ This was already included in Monday’s Also.Also.Also. Link Round Up, but it’s so good that I absolutely wanted to make sure you read it: “You Can’t Get Rid of Your Girl That Easily” By Megan Rapinoe herself.

+ And speaking of my imaginary wife (just for the sports season. Sports!) Megan Rapinoe, have you heard this yet? Megan on if the USWNT wins the World Cup: “I’m not going to the fucking White House.”

+ Ok one last Megan Rapinoe thing! She scored both of the goals – I legit almost called them baskets! hahaha, sports! – in the USWNT’s nail biter against Spain on Monday. Don’t worry Heather Hogan recapped it for you using small clear words that even I could understand. The US Women’s National Team now advances to the quarterfinals to play France – in actual Paris OMG!! – on Friday.

+ And finally, even more sports! SPORTS! This week, Serena Williams became only the second black woman to have her own Wheaties box!

In 2001, Wheaties paid homage to a true champion and an icon by putting her on the cover of a Wheaties Box. Althea Gibson was the FIRST Black Woman tennis player to be on the box. Today, I am honored to be the second.