Taking public transportation in the morning or the afternoon – on your way to or from work, say – you need something that will keep you hyped up and alert. Tunes that will protect you from the swaying crush of bodies, and overcome screeches and staticky howling commands from the front. You need a soundtrack that can block out smells.

This is not that soundtrack. This is one for late-night journeys, long slides you go on only once in a while, when you’re moving toward or away from something unusual. The ones where you climb onto the bus or train and actually get a seat, or all the seats, and the overconditioned air wraps you in absence, and you rest your head against the milky rattling window in between you and the city, and watch the lights blur in the streets or in the tunnels, and all that lovely lonely epic stuff. 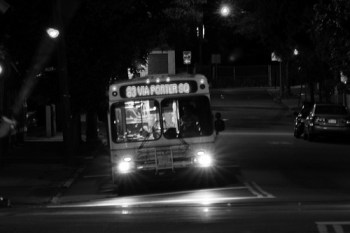