I need to tell you something but I don’t know if you’re ready. Are you sitting down? Okay! The thing is: someone has invented an ice cream sandwich that’s made with pies instead of cookies. 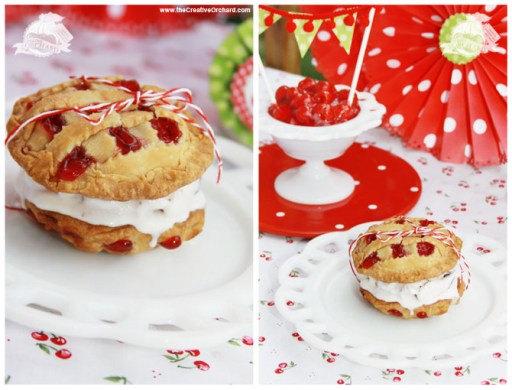 Before we go any further I just want to say that no, I have no idea how you’re supposed to hold it. But don’t think that that’s going to stop me from eating one. Or five.

I don’t want to be too bold here, but I’m feel pretty comfortable saying that pies cream sandwiches could easily be the next cupcakes. (Which, by the way, were a stupid food fad. Cupcakes are invariably dry little pre-portioned dollops of boring.) The geniuses who made the sandwiches used cherry pie, but I don’t see any reason you couldn’t go for something like apple (for a patriotic touch on the fourth of July), rhubarb, or pumpkin.

I haven’t made them yet, but I think this is one of those things that you just know is good without having to try it. I just thought I’d tell you about it because I felt greedy keeping the secret of its existence to myself. That being said, if any of you wanted to give the recipe a go and somehow finagle out a way to mail me one, I wouldn’t have any objections.