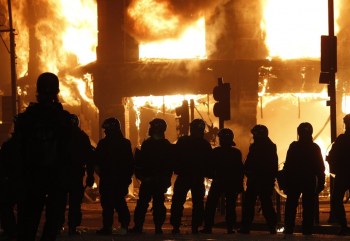 If you are an Autostraddler living in the UK, or outside the UK and haven’t somehow been lying under a rock these past few days, then you are well aware that there has been a rash of rioting throughout the country beginning with violence Saturday night following a protest in Tottenham, North London reportedly over the death of Mark Duggan, who was killed by police. Following the riots in Tottenham, London has erupted with violence and unrest all over the city, resulting in the death of a 26-year-old man from Croydon and rioting has spread to other major cities over the past several days, including Manchester, Birmingham, Liverpool, Leeds, Bristol, Nottingham, West Bromwich and Wolverhampton. Buildings are being looted and set on fire with ruthless, unfathomable force by large groups of actual human beings.

UPDATE: Very sad to update that three men were also killed in Birmingham early Wednesday morning. Haroon Jahan, Shazad Ali and Abdul Musavir were run over by a car while helping a group guard a petrol station and shops from looters. Jahan’s father, Tariq, had this to say to The Guardian: “I lost my son. Blacks, Asians, whites – we all live in the same community. Why do we have to kill one another? Why are we doing this? Step forward if you want to lose your sons. Otherwise, calm down and go home – please.”

Mother Jones has a really good explainer up for those who are looking for more information about what’s happening and why.

There is obviously a whole lot to talk about here and many, many feelings that need to be discussed and made sense of. There’s the nagging question of why — of why things escalated so quickly and to so many places and why are the people involved smashing their neighbors instead of the state and to what degree are the riots outside of Tottenham the work of some opportunistic jerks as opposed to frustrated young people with legitimate grievances — which, of course, are not mutually exclusive and certainly there are both, in any case. Why, when the government’s economic policies are part of what’s fueling the unease, are rioters creating a massively expensive situation for taxpayers and legislators that will only further deplete anyone’s ability to adequately put the pieces back together and get people back on their feet – the guardian points out that “though some of the looters have tried to justify their actions by portraying their victims as rich, many of those hardest hit are family businesses that will struggle to rebuild after being devastated by the rioters.”

There’s the question of where do we go from here, how do we begin to address the underlying systemic issues in a constructive manner? There’s the issue of the ugly racism, classism, ageism and anti-immigrant sentiment that has been popping up, especially through social media. There is the issue of the lack of leadership — Prime Minister David Cameron’s waiting until day three to return from his holiday in Italy and Theresa May’s address leaving, well, much to be desired. And, of course, there are those among us who will need to vent, to be angry, to be disillusioned, to be afraid, to share stories, to reach out to others. There are those of us who are horrified by the senselessness and unabashed violence, disgusted by the videos and pictures they see on TV.

That’s why we’ve got this open thread. Any feelings you have, or things you want to discuss, let’s get it going in the comment thread below.

And at times like this, when the worst elements of humanity are out in full force, be they the thugs attacking their own neighbors and communities or the thick, inept individuals in power who create the conditions which breed unrest of this nature, there are the members of the Sikh community in Southall coming together to protect the neighborhood and houses of worship, not to mention Muslims, Hindus and people of all faiths watching out for one another. There were the Turks and Kurds in Dalston who protected local businesses and worked to drive looters away from the area. And there are the blessed tea-partiers (the good kind) calling for calm in true British fashion and, perhaps most reassuring of all, the so-called “Riot Wombles,” assembling through Facebook and Twitter and showing up en masse with bin bags and brooms to clean up their cities. I know here in Liverpool Tuesday morning, more than 100 people showed up, mostly young people who got involved through social media efforts, on Smithdown Road and in the city centre to clean and managed to get the job done in a matter of hours.  The kids — most of them, anyway — are, still, indeed all right.

And then there is this woman, from Hackney, calling for rationality in the midst of chaos and being absolutely amazing:

It will take a while for the smoke to clear, but in the meantime, there are some signs of hope. Stay safe, everyone.