Back in September, California governor Jerry Brown signed a groundbreaking piece of legislation that banned the practice of “ex-gay” therapy on minors in his state. It was heralded as a move that could seriously curtail the dangerous, horrifying, and ultimately ineffective phenomenon of anti-gay parents sending their children to “therapists” or ex-gay programs to be “cured.” The law was slated to go into effect on January 1, 2013. But now, a federal court has ordered an injunction on the law, stopping it from going into effect until further hearings can be conducted. 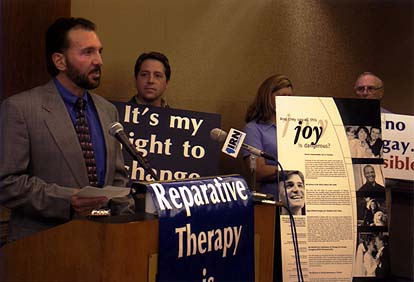 Why issue an injunction against a law aimed to stop a practice that has been so thoroughly discredited and so clearly linked to psychological and emotional harm? It appears that two families who claim that their teenage sons benefitted from ex-gay therapy, along with several licensed counselors, were the ones who sought the injunction. The injunction doesn’t mean that the ban is repealed, just that it isn’t going to go into effect until the court has heard more arguments and feels it can make a more informed decision. It’s possible that this will be only a minor roadblock to California becoming the first state that legislatively recognizes how backwards ex-gay therapy is. On the other hand, an injunction was also issued to stop same-sex marriages from being performed after Prop 8 was declared unconstitutional, and years later, it’s still not possible to marry a same-sex partner in California. While Prop 8 was a different issue for a variety of reasons, it’s concerning that any court could be convinced at this stage that there’s reason to still be considering whether ex-gay therapy performed on unwilling minors is a valid form of counseling.

Equality California and the National Center for Lesbian Rights issued a statement in response:

“Every leading medical and mental health organization has warned therapists and parents that these practices do not work and put young people at risk of serious harm, including depression and suicide,” said NCLR Legal Director Shannon Minter. “No young person should be subjected to these dangerous practices, and no licensed therapist should be permitted to engage in practices that cause such serious harm. We are pleased that this case is on a fast track so that this lifesaving law can take effect as soon as possible.”

The firm representing the pro-ex-gay-therapy side of the case is Liberty Counsel, which has ties to Jerry Falwell’s university of the same time, and whose recent legal victories as recounted on their website include making sure a school in Giles, Virginia was allowed to paint the Ten Commandments on their wall, and pushing for elementary school students in Minnesota are “taught about character and morals, and… hear the Good News.” In what seems like an intentional display of poor taste, Liberty Counsel’s web update on the case at hand is entitled “Ninth Circuit Court of Appeals Gives California Minors a Christmas Gift,” and celebrates the fact that the injunction will stop the state from putting into practice a law that “would have prevented our young clients from continuing counseling to diminish or eliminate unwanted same-sex sexual attractions, behavior or identity.” In a frankly horrifying statement elsewhere on their website, that manages to confuse “homosexuality” with “abuse” and “pedophilia” and displays a deeply flawed understanding of what “harm” is, Matt Staver, head of Liberty Counsel, says:

“Without this emergency injunction, the State of California would essentially barge into the private therapy rooms of victimized young people and tell them that their confusion caused by the likes of a Jerry Sandusky abuser is normal and they should pursue their unwanted same-sex sexual attractions and behavior… This law is politically motivated to interfere with counselors and clients. Liberty Counsel is thankful that the Ninth Circuit blocked the law from going into effect. This law is an astounding overreach by the government into the realm of counseling and would have caused irreparable harm.”

It’s unclear when the further hearings on this issue will take place, or how long this injunction might be expected to stand. It seems as though the court will be asking for further proof of how and why ex-gay therapy is harmful and ineffective. In that respect, although the injunction is an undoubtedly negative thing that may actively hurt kids, the continued hearings might not be such a terrible idea. There’s a great deal of concrete and verified evidence that ex-gay therapy is not only ineffective, but dangerous. Even just on this website, the individual stories of those people deeply harmed by ex-gay therapy are easy to find, as are the experts who have denounced it; even those whose work has been used to advocate for ex-gay therapy, like Dr. Robert Spitzer, have come out against it. Similar to the ongoing ex-gay lawsuit in New Jersey, the arguments presented to the court could form an important basis for battling ex-gay therapy in other cases. Again like the Prop 8 trial, it could be an opportunity for the deeply flawed logic and dangerous theoretical underpinnings of ex-gay therapy to finally be exposed and memorialized in a court of law, and to be forced to defend itself against logic and fact. Unfortunately, also like Prop 8, no matter how much in our favor it ultimately turns out, it will mean a delay of justice for people who need it, and in this case, that harmful practices can still be performed upon minors.