Here in Michigan, we often joke that we really only have two seasons: cold and hot. It’s actually more true than I will usually admit. Within just the last few days, things here in the mitten have finally made their transition from “risking frostbite” to “risking sunburn,” and I’ve been incredibly excited to finally pack away my thick sweaters and thermal tops and break out the summer wear. After spending a day out running errands in shorts and a tank top, I was struck at just how absurd the very idea of going outside dressed like that would have felt for me just a couple of years ago. The obvious broadness of my shoulders, presence of arm chub, and bit of thigh cellulite would have had me covering up instead of basking in the warm spring sun. It made me appreciate just how far I’ve come in learning to love the body I have.

As a fat transsexual woman, the world isn’t exactly lining up to tell that I’m beautiful. On the rare occasion that beautiful trans people are celebrated, it universally seems to be those who fit within standard cisnormative beauty standards, which include the preference for thinness. In growing “diverse”-bodies-in-advertising movement, like Dove’s “Campaign for Real Beauty,” we’re starting to occasionally see women of larger sizes. But even then, those women always seem to be selected for a certain socially-acceptance kind of shape — wide hips, large breasts, full bottoms, and narrow waists. I have precisely zero of those traits. My hips look narrow on my non-petite frame, my breasts are small, and my middle is round and squishy. Yeah okay, I’ve got kind of a big ass, but even that is dimpled and square. And yet, most days I can look in the mirror and love what I see, and that’s a pretty huge step forward from where I was just a couple of years ago.

One of the most deeply damaging parts of dysphoria for me was the profound way it warped how I saw my body. Over the course of my adult life before I decided to transition, my weight varied by nearly 150 pounds. I felt the exact same way at the low end of that range as I did at the high end — ugly. I cringed when I looked in mirror; I felt physically ill from my own image. Despite being aware that I’m not cis since my early adult life, I never really connected that sickened, disgusted feeling with the concept of dysphoria. I just thought I was a really ugly person. Given that I felt exactly the same way about myself at 215 pounds as a I did at well over 300 pounds, it hardly seemed worth it to put any effort into keeping weight off. I hit my peak weight right about the time I decided to transition in 2011, still not really making the connection between my dysphoria and my terrible self-esteem.

When I first started to transition, some of that self-hate finally started to fade. Even as I was still learning how to girl properly, the alignment between what I expected to see and actually saw did wonders to convince that wasn’t actually anywhere near as ugly as I had spent 20+ years convincing myself that I was. But that surge in confidence was pretty strictly limited to my face. I still hated my body. I wore long sleeves and jeans at all times, even when Michigan summers made their inevitable climb into the temps that feel like you’re being smothered with a hot, wet blanket. I wore Spanx and obnoxiously padded bras pretty much constantly to shove my body into some semblance of an acceptable shape. I was convinced people would recoil at uncovered arm fat, or that my bare broad shoulders would be an instant tell that I was a trans woman and would cause a scene. Even on our annual summer camping/canoeing/drinking trip — made up entirely of awesomely supportive and accepting friends — I kept covered as much as humanly possible at all times. I felt like I wasn’t allowed to have bare skin, because it wasn’t socially acceptable.

I basically learned to hate summer. Summer meant being hot and sweaty and gross because I was too disgusted with myself to dress for the weather. At least during the winter, I had an excuse for covering up. I have a distinct memory of a date with my partner two summers ago where I was walking miles around downtown Detroit in 97° July heat wearing jeans and a ¾ sleeve shirt, literally soaked through with sweat. I’m not sure if I’ll ever understand why I decided that being soaked with sweat would be less unattractive/repulsive than exposing enough skin to stay cool, but it somehow seemed reasonable at the time.

Really, it was a tank top and a new tattoo that started me down the road to loving/embracing/flaunting all my squishy bits. I had always owned copious numbers of tank tops, because, as a friend once told me, fat girls gotta layer. But, I always wore them with something, be it a sweater or button up or another top. While having my extensive shoulder and collarbone tattoos done last spring, a tank top always seemed to be the most convenient thing to wear to my tattoo appointment; it offered maximum access to the skin to be worked, without requiring me to sit and shiver mostly-shirtless in the middle of a tattoo shop. So, a win for everyone. Generally, I’d wear a cardigan to and from the appointment, because I’m the kind of lesbian who wears a lot of cardigans. But, after one particularly gruesome touch-up session where it felt like half my body was covered in vaseline and gauze, I opted to keep my sweater off. Well, I say opted, but really… I just couldn’t get the damned thing back on. In shocking news: the world did not end and I was not chased through the streets by a pitchfork mob for daring to be chubby in public. People were far more concerned about the excessive bandaging than about a fat girl in a tank top. 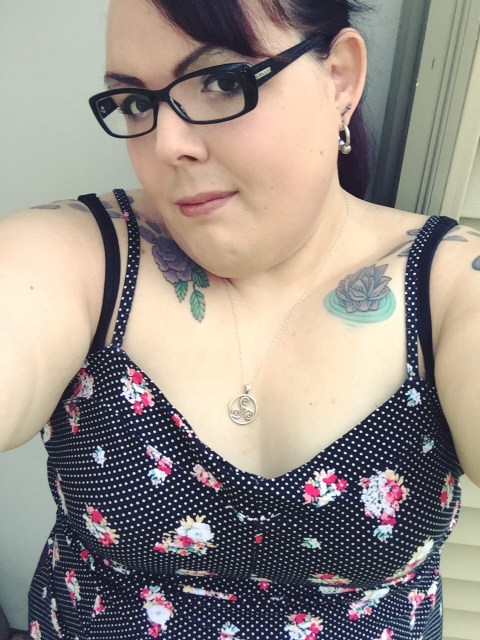 Look at all these fucks I’m not giving.

During all that tattoo aftercare, covering up just wasn’t an option. I had open wounds that could be measured in square feet, and I ruined four shirts with blood and serum before I gave up and stuck to tank tops. There was a moment during one of those days where I did my usual vain “last check in the mirror before I leave the house” thing, caught a look at myself with my broad shoulders, wide-strap tank, and tattoos and thought, “Oh… wait… I actually look… okay.” Nothing had really changed about my body in that intervening year. I had lost a little bit of weight, but it wasn’t something you could see in that part of my body. But, somewhere along the road of transition, I had stopped hating my body. It had finally become my body in a way that it really hadn’t ever felt before, and I loved every bit of its imperfect, fat-in-a-not-socially-acceptable way skin.

Around that time, I also really started to let go of the idea that I owed the world anything with regard to my appearance. I had stopped shaving any part of my body with any kind of regularity, embraced the art of messy hair, and stopped wearing foundation every day. Not worrying that I was dressing in a manner that was “acceptable” for a fat girl followed right along with it. It was fucking freeing. I got my share of asshole comments, of course. We live a in a shitty world where people say awful shit to fat people, and I’m pretty used to it. But I didn’t really get any more douche commentary than I usually had. No one spontaneously started misgendering me. No pitchfork mobs started; no rotten fruit was thrown at me. My bare shoulders and arms (and eventually even legs!) completely failed to cause an apocalyptic tragedy.

Bombarded with a steady stream of shame and objectification, learning to love our own bodies can be a serious challenge for just about anyone these days. But trans women and fat women (and especially fat trans women) have their bodies so constantly denigrated and ridiculed that it often feels like we’re not even allowed to love our bodies or see them as beautiful. We’re told that exposed skin is something that’s reserved for those who have bodies others want to see. If you don’t believe me, ask any fat girl how many times she’s been told “no one wants to see that” by friends, family members, or random strangers. But, my body and skin are just as beautiful and just as worthy of being exposed as any thin cis woman. Given where I was with my dysmorphia just a few years ago, it feels so good to be able to say with confidence that I think my body is perfect and beautiful just the way it is. Every time I step outside in shorts and a tank top, it feels like a little victory and my own personal fat rebellion. Maybe I’ll even try and figure out how to work this new crop-top trend.