If you’re going to learn to cook something that frightens you, might as well dive into the deep end. Boiled Brussel sprouts were those noxious stench bombs that showed up on my Thanksgiving dinner table when I was younger. Putrid, soggy and flabby, I never understood why we bothered serving them since no one would touch them. So over a decade later, when one of my friends told me I was in charge of prepping the Brussel sprouts for one of her annual dinners, I pretty much told her to eff off. Then I remembered she wasn’t trying to poison me and that I should be a little more minded.

As an FYI, veggies, plants and other living organisms don’t actually prioritize a ride through your digestive track on their List of Things to Do Today. Given that Brussel sprouts and the Brassica family lack the feet needed to outrun their predators, those sneaky jerks use chemical warfare instead. Hurt them (aka break open their cell walls) and they’ll hurt you right back with a punch of mustard to the face. Even though you may scoff at eating a culinary stink bomb, those green grenades are a powerhouse of vitamins, fibre and possibly cancer-fighting compounds. If employed correctly, Brussel sprouts can be sweet, earthy, nutty and complex with just a hint of sulfur that leans savory instead of stinky. Conquer the sprouts, liberate the nutrients, win all the points! Much like dealing with a live grenade, you’re going to need a strategy.

The easiest way to overcome your foe is to choose a specimen that isn’t well-armed to begin with. In the same way we break out when we freak out, cruciferous plants produce more glucosinolate (ie. the precursor to bitterness) when they’re stressed. What makes a Brussel sprout flip its shit? Heat, sunlight and drought. Purchase sprouts in the autumn or winter for less bitter buds and your tongue will thank you. 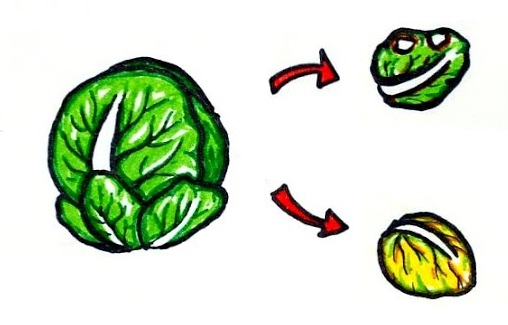 Sprouts should be fresh. Nix anything that doesn’t look worthy of a Cabbage Patch Kid.

Choose dark green sprouts with tightly packed leaves and minimal discolouration. Smaller sprouts require less cooking time, so ignore the exceedingly bulbous ones. Even though the outer leaves don’t drastically affect the flavour, the darker colour implies a higher concentration of vitamins and minerals. Yellowed or damaged leaves are already on their way out and taking their nutrients with them. Plus, pretty plants imply less peeling prepwork and more Brussel for your buck. Win-win.

Did you know you can buy Brussel sprouts on a stalk? Did you even realize that they grew on a stalk? I bought a branch of Brussels and was left kind of dumbfounded by the useless wooden stalk. Stick to loose orbs unless you need to fashion a bayonnet the first lady would approve of.

So now that you have your sprouts, how do you go in for the kill? The plant’s bitter compounds are concentrated in the most actively growing parts. When you’re looking at Brussel sprouts, focus on the core. You could painstakingly harvest the leaves one knife swipe at a time, but the tediousness may be more offputting than the taste. A faster way to decore the suckers is to cut them in half or quarters and just cut the damn chunk out. Or you can be brave, leave the core in and attempt to overcome the glucosinolates another way. 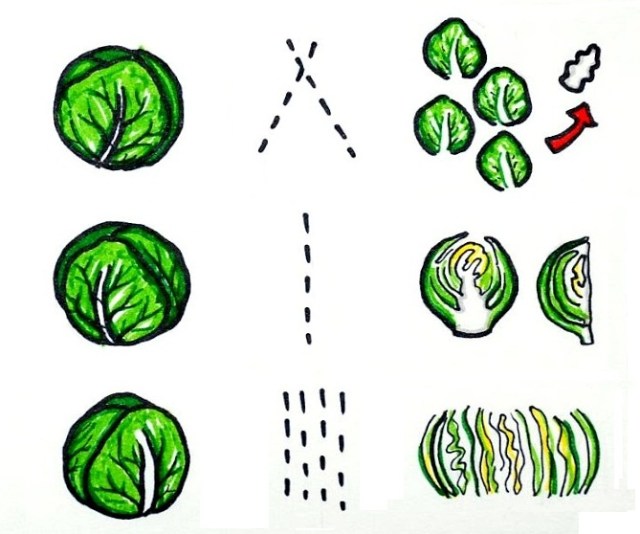 Chop Chop Chop: Trim the leaves from the core, slice them in halves or quarters or shred into adorable coleslaw.

Unless you have hardcore nostalgia for grandma’s overcooked orbs, boiling isn’t a gateway cooking method for Brussel sprout bromance. A shitton of boiling water does dissipate some of the stinkier compounds, but it leaches away and/or degrades vitamins and cancer-fighting compounds too. It’s a slippery slope from green orbs to grey mush, but if you still  insist on boiling the suckers, try cutting them in half so they’ll cook through faster and spend less time in the brew.

There’s debate on which cooking methods preserve the most nutrients without sacrificing flavour, but apparently heating sprouts doesn’t disarm them as cancer fighters. Limit the cooking time to help the sprouts maintain their shape and structure. You might as well get ’em hot and crispy to improve the likelihood of taking a second bite. Hot, dry cooking methods like sautéing, broiling and grilling bring out the better side of Brussel sprouts’ bitterness. Caramelize or char them long enough and they’ll reveal their hidden sugars.

If I haven’t emphasized it enough, Brussel sprouts are the flavour juggernauts of the cabbage family. If you play it nice with gentle flavour pairings, the sprouts will walk all over your dish and your tastebuds. If you enjoy a sulfurous ass-whooping you might enjoy them as is, if not, pair them with equally strong ingredients to acclimatize your palate to the sprouts’ pungency. 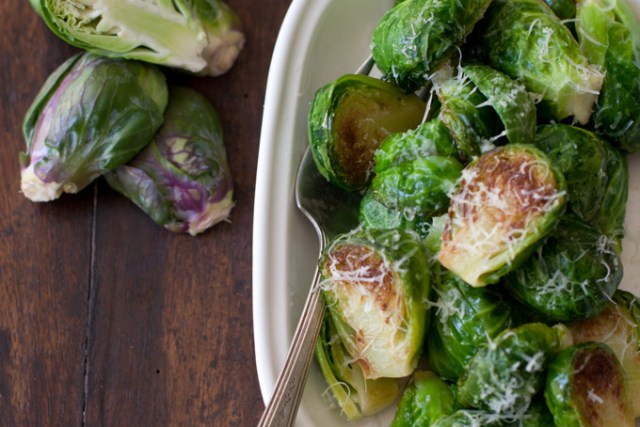 101 Cookbooks and cheese makes everything better

Garlic and onions make everything better and Brussel sprouts definitely follow that rule. All three are characterized by similarly sulfurous scents, so they echo one another while making each taste more like itself. If you were eating them raw this could knock you out, but given enough heat and time they produce a caramelized, earthy dish. You could do a helluva lot worse than Brussel sprouts sauteed with a shitton of garlic and butter.

Since Brussel sprouts resemble tiny cabbages, why not treat them as such? Finely shred them and use them in your favourite coleslaw recipe. I use them in my pseudo Waldorf salad, alternating sprout shreds with layers of apple, craisins, pickled onions and walnuts. Or bravely pickle them and let me know how they turn out.

If you’re still doubtful, throw bacon at it. Smokey, savory, salty, sweet and (most importantly) fatty, bacon rounds out the Brussel sprouts’ harshness. Serve it over pasta, include it in a breakfast hash or make it into a sandwich for tasty times. If you happen to lean more towards the vegan side of things, you can still echo the bacon spirit using liquid smoke or maple and miso.

Try your hand at the orbs and learn to cook them to your liking. For all you know, you could be the one to reinvent them for your family’s Thanksgiving. Or you could just resign yourself to silently eating another helping of grey mush next week.