Learning to feed yourself in the forest can be one of the most terrifying things. Am I about to give myself food poisoning? Is this berry safe? How can I stay full without carrying anything? Oh god, was this supposed to be refrigerated?

With Ode to My Pack Sack, learn to pack for A-Camp without having a meltdown on the shuttle. Give a man a fish and feed him for a day, give a queer a granola bar and stave off malnutrition until you make it back to civilization. 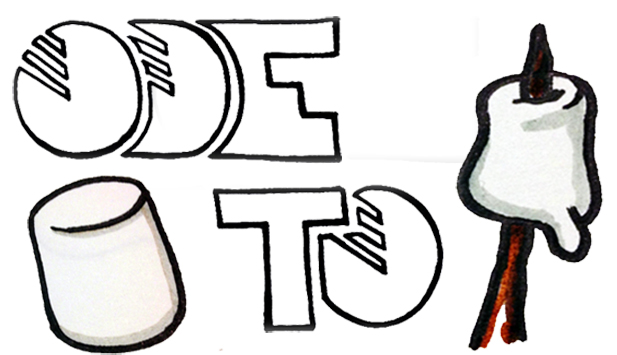 Should I confess now that I’m not a camper? I’m kicking it in the woods right now, but if it weren’t for you lovely ladies there’s no way in fuck I would ever give up my bed for rocks and bugs. Even though some would argue that staying in cabins doesn’t count as roughing it, I secretly hoped we were going to Camp Mona instead of the Alpine Meadows Retreat Center.

The only Camping Wisdom I have acquired is that rocky riverbeds make terrible beds and chopping wood’s hard.

Oh, and marshmallows need to be toasted and consumed in large quantities.

Even though you probably realized that marshmallows took some form of inspiration from the mallows of the marsh, they have less to do with Free Swamp Candy and more to do with Free Swamp Medicine. Althaea officinalis’s gummy mucilage (think okra and sassafras) stabilizes foams and soothes mucous membranes, so it was only a matter of time before someone realized it could do both. Invented in the 19th century by those crafty French as a type of lozenge/bonbon, they whipped together sugar, egg whites and mallow extract as a Mary Poppins-approved drug delivery device. Pâté de guimauve’s botanical extract eventually made way for gelatin or gum arabic and the fluffy concoction showed up on the shelves of your confectioner instead of your druggist. And it would be a shame to fuck up all of that history.

But how should you toast it? If you didn’t have two plane rides and a shuttle to dream about edible white clouds, planning your Proper Marshmallow Roasting Technique sounds ridiculous. I mean it’s like, marshmallows and fire right? What else can you do? But in the same way magical fairies turned grain, yeast and water into beer, they also managed to turn it into ale or lager and then porter or brown ale and then London or Baltic. You’d be surprised how much you can do with a few options. So mentally conconct your perfect mallow while you’re stil sober enough to not fall into the bonfire. 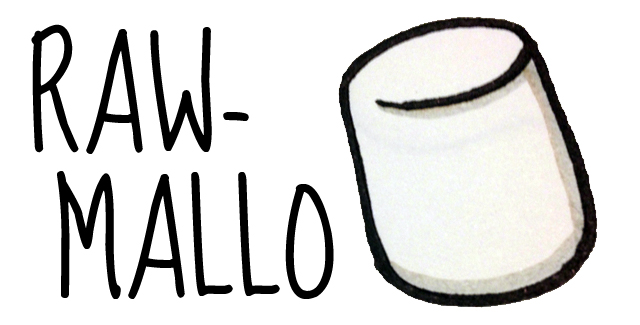 Characteristics: Retains its structure and form until eaten. A suitable non-hazardous projectile.

Seriously? It’s just a raw marshmallow. I mean, you don’t even need the stick. Just fucking steal the rest of my bag, hide in a tree and eat them like a squirrel somewhere. If you want to improve your room temperature mallow experience, you could grab a peep or try to make your own.

Characteristics: Ooey and or gooey without losing any of its snowy markings, it, becomes sticky beyond belief trapping ingredients Katamari-style.

If you’re craving liquid goodness that is more interactive than simply sticking your hand in a jar of fluff, park your marshmallow far from the flame for as long as you can. If you accidentally left your bag of marshmallows on your windshield, you’re halfway there!

For you non-campers (unless you happened to pack it) you can also nuke your mallows in microwave. Instead of doing the Maillard Reaction Mambo, microwaves vibrate the polarized water molecules locked within the fluffy exterior. As the water dances, steams up and expands it stretches your mallow to comical proportions. Perfect for rice krispie squares and sugary third degree burns, your mallow should stay malleable if you nuke it under a minute. As long as you keep an eye on it, you’ll be sure to have scalding hot sugar that’s as pale as the fresh fallen snow. Anything more than that and you’ll boil off the remaining water, leaving yourself with a hard crunchy mess, but maybe you’re into that. 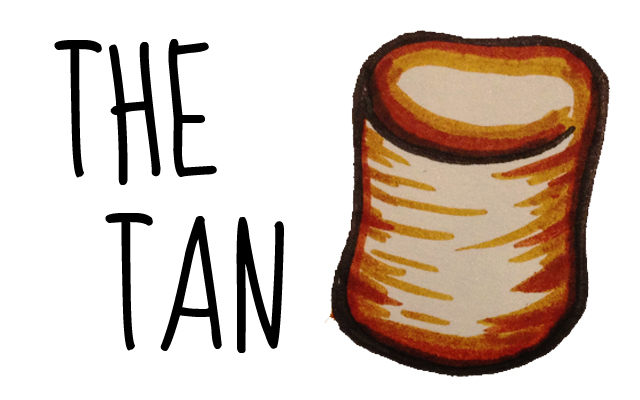 Characteristics: A delicate caramel tinge that doesn’t detract from the marshmallow flavour, this solid marshmallow retains its form, allowing the toaster to eat it off the stick and not the floor.

If you’re more partial to a Californian tan without risking a puddling mess, take a cue from torched crème brûlée. Think two things: hot and fast. You want to quickly focus the heat directly on the surface of your mallow without liquifying the innards. Make a clearing in the coals and hover your mallow for a few seconds and then remove for it to resolidify. This may take a bit of time, but if you’re fussy enough to want a solid center (looking at you Hansen), then it’ll be worth the effort. Given that you don’t need a large flame, now would be the time to employ your Marshmallow Lighter, Marshmallow Candle or Marshmallow Jar of Terrifying Sterno. 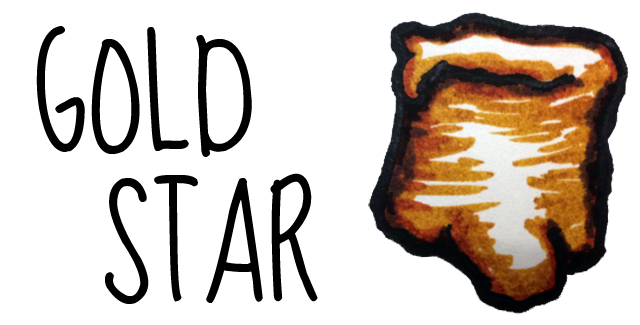 Characteristics: Lightly caramelized with molten flesh, it has the perfect balance of crispy exterior and gooey innards. Its siren call will draw you like a moth to a flame. You will burn your mouth and swear.

When it comes to crackly charred goodness, you want radiant heat more reminiscent of a gyros spit than a rotisserie grill’s flames. Now would be the time to employ your fancy pants toasting forks since you’re trying to melt that fucker. Multiple tines mean it’ll get a better grip on your mallow and you’ll be in charge of the spinning as opposed to that pesky asshole gravity. Position your mallow as close to the red hot coals and continuously turn until it puffs up. Then slowly pass through the flame to continue the blistering process, taking care to pull it once it starts to droop. This molten treat is best served in s’more form since it’ll be too hot to handle or take in one bite. If you are a fan of popping flaming treats in your mouth, you might want to load your forks with mini marshmallows. Your hard palate will thank you. 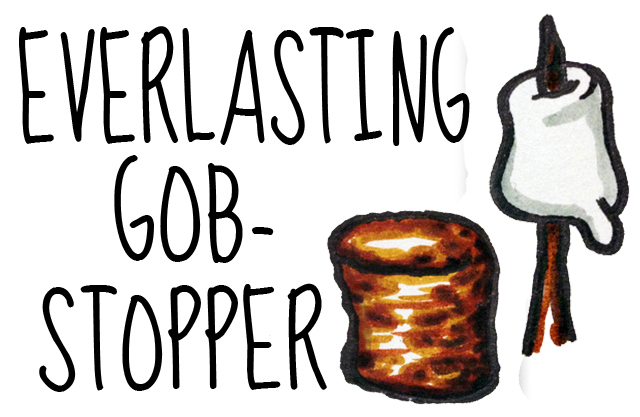 Characteristics: Self-renewing, each crispy layer gives way to another as it rises out of the ash. Almost as mystical as the phoenix, but edible.

If you love opening up matryoshka dolls and lasagna corners, this is probably your game plan. A crispy shell of char and sugar that allows for more crispy shell, you’ll want to make sure you can actually pull off your treasure. Plunge it directly in the flame to cause it to blister and bubble, making sure to not ignite the beast. Eventually the charred sugar will reform a singular charred entity. Don’t warm it for too long since you just want it to shed its blister, but not fall onto the ground covered in pebbles and broken dreams. Give the newly revealed mallow innards a few moments to set up and do it again! Now would be the time to employ your gigantor Campfire Giant Roaster Marshmallows so you can get a few extra skins. 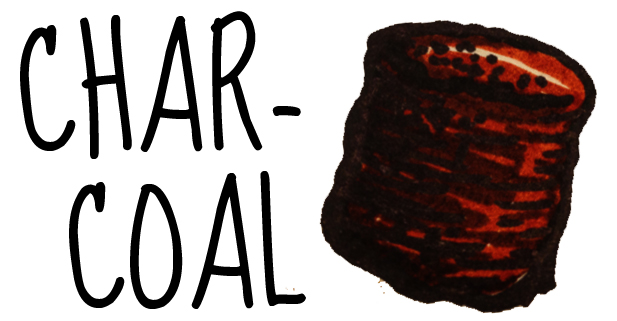 Shove your mallow in the fire and pop a beer/make out with a girl/get lost at the edge of the woods. When it comes to burning things by not paying attention, I’ve got that covered and I’m sure you do too. Make sure to wipe off the soot which unfortunately is everything. Good luck getting that into a s’more!