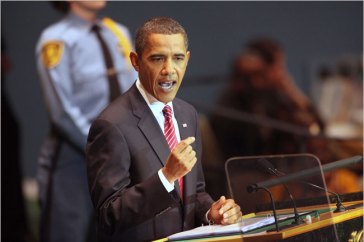 NOBEL PEACE PRIZE: Even Obama was taken by surprise when the Nobel Committee announced this morning that the president had won the peace prize. The award was given in part because of Obama’s “effort to reduce the world’s nuclear arsenal.” It seems more like this is some sort of gold star to congratulate Obama on not being George Bush. (@nytimes)

ENDLESS DEBATES: “Obama Is Gays’ Best Friend — To Say Otherwise is Shortsighted, Insulting and Just Plain Dumb“ Earl Ofari Hutchinson, a Huffington Post writer, argues “African-Americans languished at the absolute bottom of America’s political, economic and social scale, and that blacks as no other group in the nation were subjected to decades of slavery, Jim Crow segregation and massive and relentless terror and violence based solely on their skin color. No other group in America has faced that monstrous obstacle.” I’m glad we’ve moved past comparing the gay community with the black civil rights movement, because there are no similarities at all. Just clearing that up. (@huffpo)

DADT: Lesbians Suffer More Under DADT. For more information on this topic check out our interview with Skyler James, a soldier who was denied her expected DADT discharge after being outed by a comrade and suffered incredible homophobic persecution afterward.

CAPITOL IDEA: So Tuesday, a bill was passed in Washington, D.C., to legalize gay marriage. (woohoo and such!) Tim Craig of the Washington Post answers all the questions you’d ever have about the bill. (@wapo)

CAREFUL WORD CHOICE: New Jersey Governor Jon Corzine is talking up gay marriage. “I want to be very clear on this,” Corzine said. “I don’t call it gay marriage. I call it marriage equality because I believe that we ought to be treating people under our Constitution here in the state of New Jersey as determined by our courts. There needs to be equal treatment under the law.” (@ontop)

WHAT’S SHE SMOKING: Sen. Gillibrand thinks Obama will back her fight to repeal DADT. Queerty disagrees. “But we’re also reaching this conclusion based on past evidence. Just last month Gillibrand’s colleague Sen. Harry Reid made a direct appeal to Obama, and the Pentagon, to instruct lawmakers on what to do about DADT. And what was that request met with? A message from the Defense Department reiterating the “Obama is too busy” mantra.” Bonus: Rachel Maddow video after the cut. (@queerty)

HATE CRIMES: House votes to expand hate crimes to include sexual orientation “Said Rep. Tammy Baldwin (D-WI) in a statement: “This measure is long overdue and I am pleased that Congress has voted to do what’s right. Martin Luther King, Jr. often said that ‘the arc of the moral universe is long, but it bends toward justice.’ We see that beautifully illustrated here today.” (@towleroad)

GAY DISNEY: Hollywood has it’s first out studio chief, Disney’s Rich Ross. Disney has long been a gay-friendly company, so it’s no surprise that they are the first major studio to be headed by an out gay man. The LA Times also links to a nice profile on Ross from a year ago where he talks about his job and his partner of more than 20 years. (@latimes)