MARRIAGE: Jim & Pam got married last night on The Office. They’re my favorite straight couple ever. It was so cute I cried at the end, mostly ’cause it wasn’t really that funny ’til the end. I’m going to an actual wedding today too and therefore

WILL YOU BE MY LESBIAN HERO: Back to what happens to gay people on TV. There is no wedding dance. There is no accidential pregnancy. There are only superheroes with insecurities. The Claire & Gretchen kissing scene from this upcoming Monday’s episode of  Heroes has hit the interwebs and you know what it reminds me of? Um … the initial lesbian kissing scene that kicks off every lesbo sweeps television storyline EVER. One of the girls is confused as to why the other is [insert suspicious behavior here], they argue for about 30 seconds, the suspiciously behaving girl approaches the clueless girl and plants one on her lips with their lips closed while fiercely holding the other’s head. Guess not everyone can start out like Jenny & Marina.

THE DISEMBODIED VOICE: In favor of RADIO, with This American Life as an example of its magic: “There’s something powerful about the disembodied voice. Every reader knows the way a book can lull you into the rhythm–the world, in fact–of another human being.” (@bitch)

THE GREAT FIREWALL OF CHINA: As Autostraddle tweeted about earlier this week, Chinese news agency Xinhua made up a story about a city in the northern Swedish woods with 25,000 lesbian inhabitants who wore “thick waisted” toolbelts and attacked incoming men with their sapphic lustiness. Our theory is propaganada to scare the Chinese away from lesbianism, but regardless, later in the week China broke the internet with searches for this non-existant potential tourist destination. I’d like to suggest Dinah Shore.

NO HOMO: Practically any situation can be interpreted as gay these days, which is why the masculine industry of rap has invented the phrase “no homo.” After all, “You can’t be fucking people up the a** and be a gangsta.” 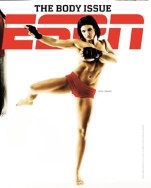 MODERN FAMILY: The super cute show Modern Family has been picked up for the whole season! It features a gay couple with an adopted baby and it’s funny. (@ew)

GLEE: Why Kurt from GLEE is my TV Hero. (@bitch)

SPORTS: Hot naked athletes are gonna be on the cover of ESPN The Magazine but we are probs still not gonna buy it. (@huffpo)

LEAVE LINDSAY ALONE: Lindsay Lohan’s Mom defends her daughter against attacks from the media and her Lindsay’s father: “Leave Lindsay alone. Let her be a real 23-year-old. Let her grow, and let her artistic abilities flourish. Stop judging the Britneys and the Lindsays. They are very creative girls, and that is a gift from a higher power of God.” (@nypost)