President Obama FTW! Obama ordered the Department of Health and Human Services to establish a rule that would prevent hospitals from denying visitation privileges to gay & lesbian partners. 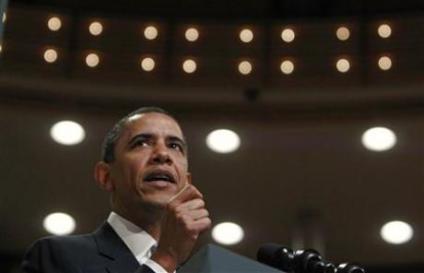 “There are few moments in our lives that call for greater compassion and companionship than when a loved one is admitted to the hospital. … Yet every day, all across America, patients are denied the kindnesses and caring of a loved one at their sides.”

It’s worth mentioning that the GLBT community did an AMAZING job spreading the story of one of the cases which inspired this new policy: that of an Olympia, Washington, lesbian couple who were kept apart as one died from an aneurysm while hospitalized in Miami, Florida. The couple, Janice Langbehn and Lisa Marie Pond, had just boarded an R-Family cruise with their two children when Pond had an aneurysm. The hospital would not accept the appropriate power of attorney papers sent there and denied Langbehn visitation rights.

Pam’s House Blend has a roundup of gay blogger reactions to the piece. Pam also received an email from Janice Langbehn about the directive:

hi Pam, thank you for covering the story about President Obama calling me and signing the memo yesterday. I know we have long way to go in the LGBT movement but if the memo enlightens one health care facility so that holding someones hand as they are dying is not a GAY right but a HUMAN right – I will take it.

Unfortunately it those last precious hours with Lisa the kids and I will NEVER get back – and at least President Obama was willing to say he was sorry for how we were treated. Jackson Memorial in Miami REFUSES to apologize to the kids and I.

Politico pointed out that “the lens of the gay rights movement is, increasingly, full marriage equality, putting a limit on the credit Obama can win for incremental steps.”

Some other worries include how this will be enforced. Most likely, it will be through the threat of pulling Medicare/Medicaid benefits. According to Newsweek, that made one blogger worry that Catholic hospitals might just stop accepting Medicare and Medicaid, similar to how the Church pulled charity programs in response to DC passing a gay marriage law.

But also we lost our appeal and have to surrender documents related to Proposition 8, the gay marriage ban. On Top Magazine reports that “Chief US District Judge Vaughn Walker’s ruling required pro-gay marriage groups to hand over Proposition 8 campaign materials to defendants in the high-profile trial considering the ban’s constitutionality.” (@ontop mag)

Today’s the National Day of Silence to raise awareness of the too-common bullying of LGBT students. (@associatedcontent)

The gay rumors about possible Supreme Court nominee Elena Kagan, which we talked about the other day, have started to really piss some people off, including the White House. The administration has emphatically insisted that Kagan is straight. Obvs whenever gay rumors happen and then they’re denied, people start to wonder what’s so wrong with being called gay? As Gawker puts it: Why is the White House treating lesbian rumors like allegations of vampiric necrophilia? When CBS republished a column repeating the rumor that possible Supreme Court nominee Elena Kagan is a lesbian, the White House responded furiously. Because lesbians are terrible?

It’s a double-edged sword. Of course, rumors should always be cleared up. Should we be attacking the White House for spreading the truth? Is it just that they’re doing it so vehemently? It’s not like they’re trying to nominate someone who doesn’t believe in gay rights.

Constance McMillen will be the grand marshal of the New York City Pride parade. Fun! Autostraddle will be there, too!