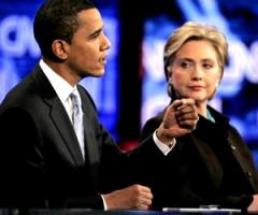 President Obama vowed Tuesday night to push ahead with his gay rights agenda, assuring an audience of gay men and lesbians at the White House that he remains committed to repealing the Defense of Marriage Act, which allows states to refuse to recognize same same-sex marriages performed in other states.

“Committed gay and lesbian couples deserve the same rights and responsibilities afforded to any married couple in this country,’’ Mr. Obama declared, during a White House reception to celebrate June as gay and lesbian pride month.

Also, the Labor Department is going to “issue regulations this week ordering businesses to give gay employees equal treatment under a law permitting workers unpaid time off to care for newborns or loved ones.” Hey it’s like paternity leave but for gay people! This is simply an executive action, not an act of Congress, so it’s got less staying power than a law. But this, combined with Obama’s protection of partner rights in hospitals earlier this year, shows that he’s committed to advancing gay rights through several government avenues — at least, that’s our take on it.

Her remarks are a bit long, I know, but it’s worth watching:

Basically, Obama and Clinton were covering two sides of the same coin. Obama is working for us on the homefront, and Clinton is working for us abroad. “It’s not right, it’s not who we are as Americans, and we’re going to put a stop to it,” Obama told a raucous White House reception honoring Gay and Lesbian Pride Month. HOLLER.

The New York Senate just passed an anti-bullying bill that’s inclusive of gay and trans students, and Gov. Patterson is expected to sign it into law soon.

The bill calls on school officials to address bullying and bias-related behavior of all kinds that interfere with student safety and learning. The law requires reporting of bias-related incidents to the State Education Department and creates rules that help prevent hate violence. (@ontop) 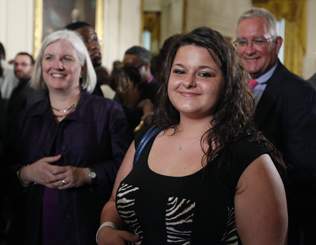 Constance McMillen was in Washington yesterday for Obama’s little shindig, and she made the rounds on Capitol Hill to try and convinve lawmakers to pass an anti-discrimination bill similar to the one in New York. “On Capitol Hill on Tuesday, McMillen huddled in a conference room with Sen. Al Franken, D-Minn., to talk about a bill he introduced to ban public schools from excluding gay and lesbian students from activities.” (@clarion-ledger)

This article sums up pretty much all of our feelings about the forthcoming decision in the Prop 8 trial — extremely cautious optimism. Apparently the rest of the LGBT community agrees. We all know the facts are on our side, logic is on our side, but there’s still that nagging pit of fear in the bottom of our stomachs because, you know, things like Maine still happen! (@atlantic)

Lisa Miller and Janice Jenkins are back in court. Well, their lawyers are anyway.

Miller, of Forest, and daughter Isabella Miller-Jenkins failed to appear for a court-ordered Jan. 1 custody swap in which Jenkins was to get the girl. The girl is now listed as missing, and Jenkins’ attorney has said the two are believed to have moved to El Salvador.

On Wednesday, the Vermont Supreme Court will hear arguments from Miller’s attorneys who say Judge William Cohen erred last November in awarding custody to Jenkins, who is not the biological mother.