Sunday 11:30 AM – Pride Parade with the NYC Bloggers & Digital Activists

Called upon to represent vaginas in the NYC Blogger group, Team Autostraddle showed up in our rag-tag interpretations of the official uniform we’d made with Hanes & Iron-Ons (obvs could not afford cafe-press). 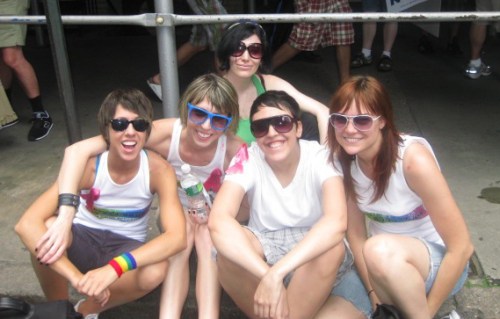 Alex: Apparently, when you’re at the back of the New York City gay pride parade (because you’re gay?) you’ll have a lot of waiting to do… and so we did! I was very impressed with the Intern Army – they modeled through this challenge and they were still in the running towards becoming Autostraddle’s Next Top Intern. 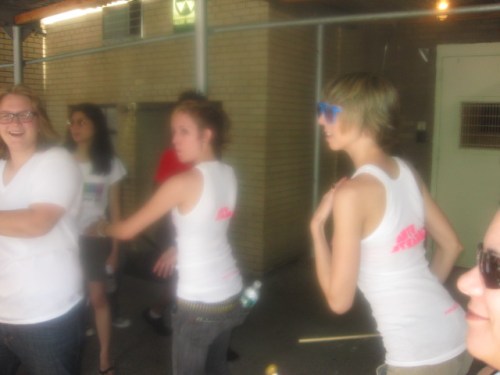 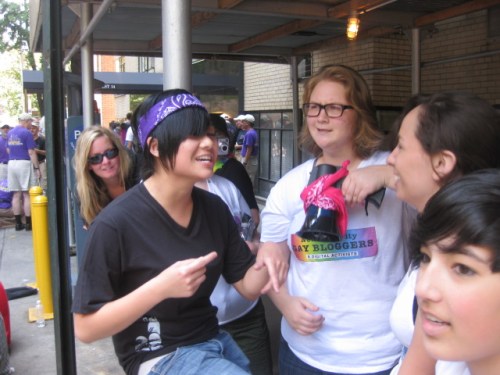 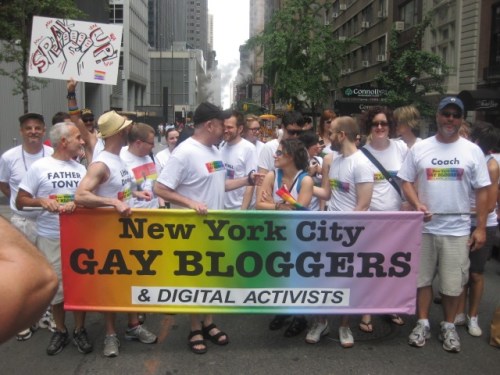 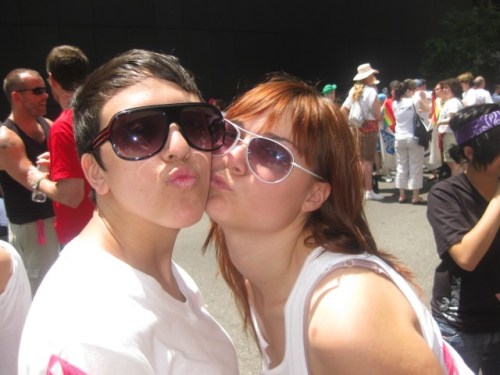 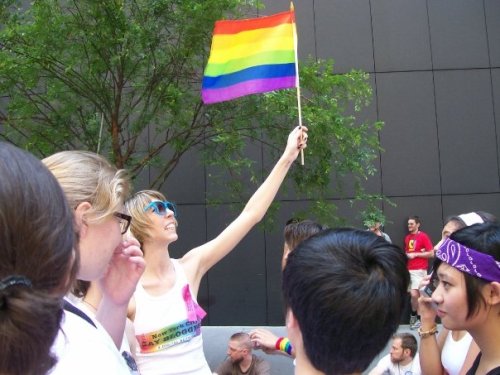 Intern Lola: The Pride Parade was truly a test of endurance. After arriving (somewhat) promptly to join the group of marching bloggers, our troops waited dutifully for the parade to begin. And waited. And waited. After hours stood behind a group of male nudists, and our numbers only slightly dwindled, we finally began to move. It was a glorious dozen steps, until we stopped for another prolonged period of time. We kept ourselves entertained through numerous trips to street vendors, Intern Katrina’s rapping, lots of whining, and my own feeble attempts at reinvigorating our excitement through constant “wooo!”-ing. 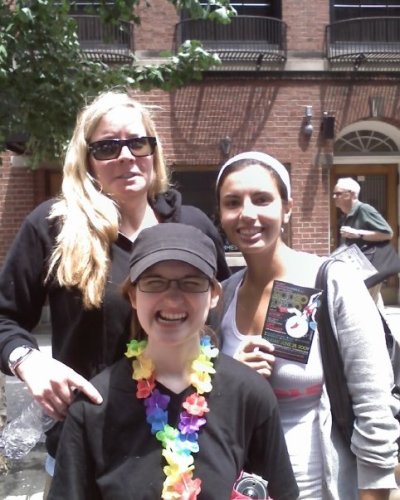 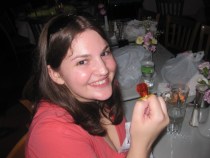 Intern Nicole: The past couple weeks I went “flyering” many times. Most of these times have blended together as one, except for the pride parade, that stood out, oh and the dyke march.

Fact: I can’t stand people on the streets of New York who try giving me flyers to anything, so I was not all that keen on doing it myself. Therefore, to not be as annoying as those people on the street, I took a much more strategic approach with some one-liners, etc. to get their attention. I like to think it worked, people laughed, and I like making people laugh so that is a plus. Maybe they came to the party, that would mean it really worked. I also got to talk up Autostraddle a lot, which I enjoy. Met some interesting folks (including some who were already Autostraddle readers. hi guys!) at places I’d probably never go to otherwise.

In the end I got a strawberry ring pop, so obviously all the long subway rides, and other inconvienences were all worth it.

Oh, and this one time at a certain lesbian bar, I ended up giving a flyer to a certain actress from The Sisterhood of the Traveling Pants. The one who is not from Gossip Girl, Ugly Betty or Gilmore Girls. That was interesting and unexpected. 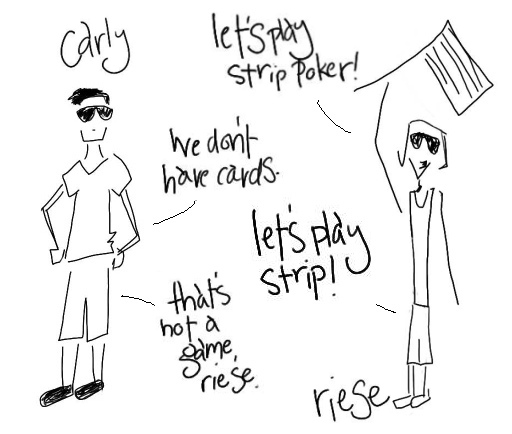 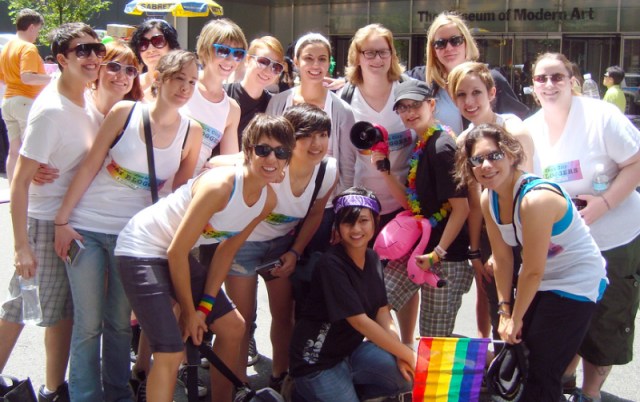 We were temporarily positioned behind a group of gay male nudists. This was a life scarring experience apparently as it has been artistically rendered by not one, but TWO of our fine army. 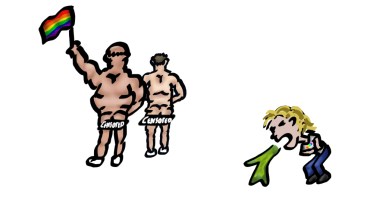 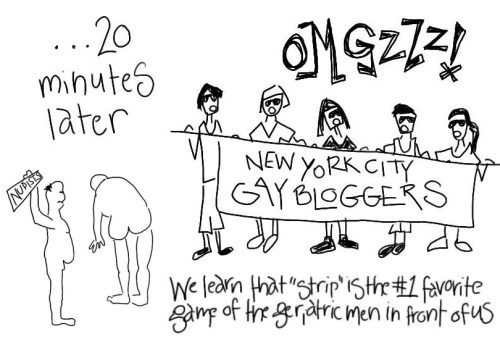 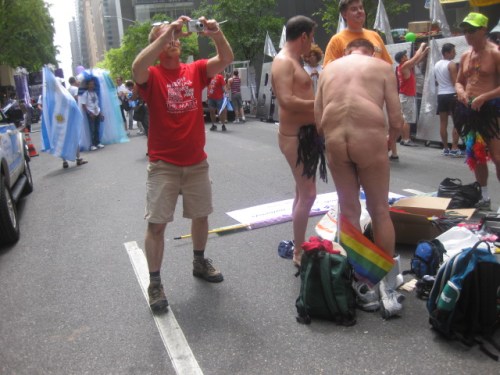 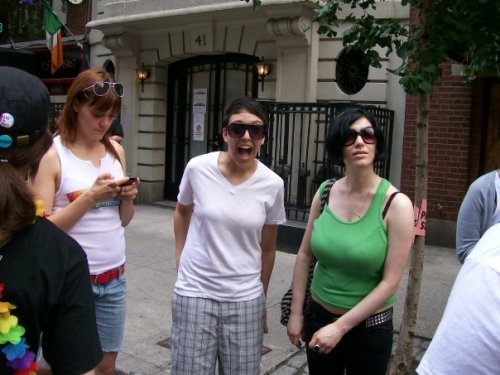 So, some of the team headed downtown to flier while the rest of us waited for the parade to start … 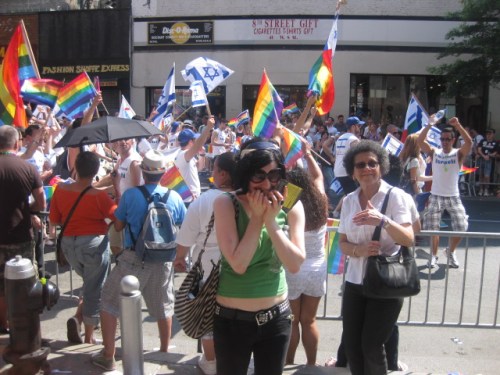 Otherwise-Inclined Stef has found her people (not the gays, the JEWS!)

Stef: While Carly and Robin headed down to West 4th St to hit the heavy crowds gathering there, Asher and I walked from midtown all the way down to the West Village, handing flyers out to hot girls ONLY. This meant that we were responsible for spotting fine homosexual women from behind, which is a challenge of top model proportions. We squeezed through the crowd to talk to lots of pretty fauxhawked girls who climbed on top of mailboxes for a better view, keeping our eyes peeled for any telltale signs – wifebeaters, alternative lifestyle haircuts, tattoos of Tegan and Sara’s autographs. At one point I tapped a cute girl on the shoulder and began my well-practiced pitch: “Hey, we’re having a party tonight! You should..” and then she turned around and I noticed it was a FUCKING LITTLE BOY and not a lesbian at all. By then it was too late to stop, so I sucked up my dignity and invited a pair of 13-year-old boys to our party. They didn’t show.

Also, to the girl who approached a pair of women who were cuddling outside a storefront and asked them in all wide-eyed honesty: “ARE YOU GUYS LOVERS?!?? CAN I GET A PICTURE OF YOU?!” – really, dude? In New York in 2009?

Robin: DJ Carlytron and I went down to the West Village during the Pride Parade and walked by this bar patio where this group of clever ladies had a sign up covering the drink specials chalk board made with Pencil on Napkin that said “Girls R Us Pride Party. No Cover.” So we decided to stop by their “party” and invite them to ours.  In all honesty, I initially agreed to join them because I thought the bar was the same establishment that was selling pizza next door… sadly it was not.  But I had a Corona with them and they ended up helping us promote! 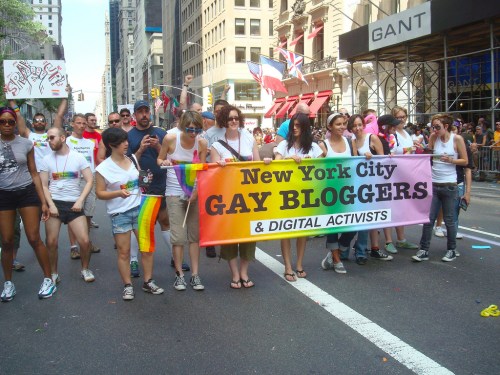 Alex: Having stood on Christopher St. two years ago to watch the gay pride parade for the first time, I can say that being IN the parade was obviously the best way to witness this awesome celebration. We started on 54th Street and made our way down 5th Avenue, only making it to 17th street by 5pm which is the time we had to bizounce. Which means we didn’t ultimately reach the mecca of the gays – the Village, Stonewall, etc.
But that’s okay! Cause one of the best things about this parade experience (besides marching behind a float of fabulously toned and tanned dancing-to-‘Billie Jean‘ gay boys) was seeing the support from the mixed crowd on the sidelines. It was not only the gays who were dancing and celebrating on the streets for pride, that’s for sure! And that’s surely awesome. 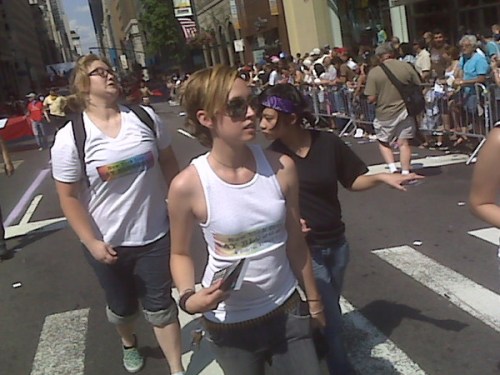 Lola B: Eventually, we were able to proudly march through the streets, enjoying a primo spot between two dance floats. With hawk-like precision, we handed Rodeo Disco flyers to the hottest parade watchers in sight (and maybe a few unsuspecting elderly tourists who just really wanted free stuff from us). As the parade paused at frequent intervals, we found ourselves moonwalking, pop-and-locking, and bending one another over/thrusting in a new move we interns dubbed “the Autostaddle”. Eventually, with only a handful of us left and noticeably fewer hott bystanders left to flyer, our fearless army ducked out of the parade route early (if you can call 5 pm early) in order to prepare for our fantabulous party. While some might look to this as a failed test of endurance, I like to think we were just so much more efficient than the rest of the Pride Parade, that we beat them to the finish.

Sidenote: I need a photo of y’all doing the autostraddle. Like, STAT. I saw you do it, and I need to see it every day, as often as possible.

sign up for our newsletter
Related:eventnyc pride 2009rodeo disco

auto has written 604 articles for us.