NOM has been relatively quiet since they Lost All the Things back in November, but just like Brian Brown promised, they’re remaining faithful to their mission. He slunk away to France with his tail between his legs to join the protest against Mariage pour Tous. There, he was given a second wind by the energetic march and left a hopeful promise for his fellow homo-hating Americans. “I would ask you to join me in thinking about more creative ways we can proclaim our pro-marriage views with passion and conviction.”

What powerful and inspiring words! Do you think he was going to start a charity? Write a book? Make some more videos? Be still my beating heart! 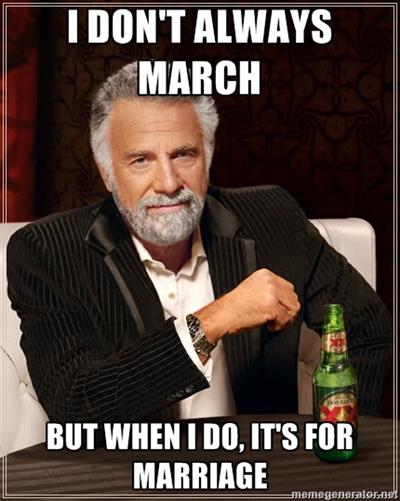 Looks like that “creativity” means NOM’ll try to jump on the meme bandwagon by making their March for Marriage both light-hearted and accessible! Nothing says “haha that’s so funny and zany” like a movement that seeks to remove the constitutional rights of their fellow citizens. M4M has been “adding humour” to their Facebook page by giving their followers a daily reminder of what they need on March 26th. 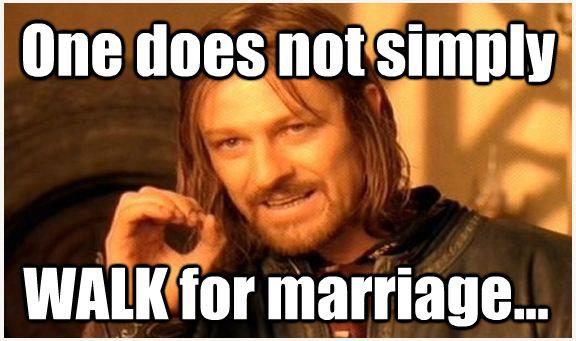 Sadly, much like many of their other attempts to stay with it, their efforts have completely missed the mark. Whereas the creators might think they’re being incredibly witty, the only people laughing are the redditors that find this in r/cringe. Given that Sean Bean portrayed a trans* English teacher in The Accused, I sincerely doubt Boromir would be joining them for a walk or a march to strip the rights of LGBT Americans. Although one could argue that they’re making themselves more relevant by speaking the younger generation’s language, they’re simply proving to us young whippersnappers how far removed from reality and society they truly are. 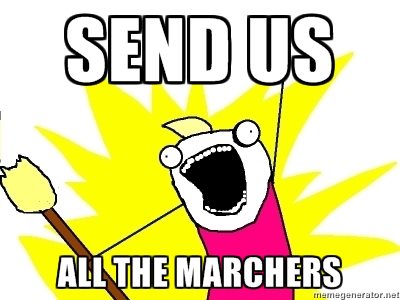 All around the world, people are realizing equal rights really aren’t so bad. Even though it seemed like Mariage pour Tous wouldn’t happen, they defeated their opponents by 100 votes. Back on this side of the Atlantic, multiple Republicans have heeded the call to modernize and have come out in support of same-sex marriage. As of Monday evening, 75 members of the Grand Ol’ Party signed on to make marriage equality a reality for all citizens, regardless of political affliations. Among the signatures you’ll find Bush advisors, Reagan advisors and politicians that ran on platforms supporting Prop 8, proving that not everyone is living in the past. Deborah Pryce, a former Republican member of the United States House of Representatives spoke about her new view. “Like a lot of the country, my views have evolved on this from the first day I set foot in Congress. I think it’s just the right thing, and I think it’s on solid legal footing, too.”

But of course, some anti-gay views have yet to evolve. Family Research Council policy studies fellow Peter Sprigg warned, “I don’t think that’s a constructive attitude to take because Republican officials cannot win without social conservatives. They are the core base of the Republican Party and the most active volunteers, and it would make no sense to turn their backs on them.” NOM has decided to take it a step further with their threat. In a press release on Monday, Brown took credit for causing three senators to step down and have offered themselves as financial hitmen for whichever Minnesotan politician dares to cross the party line.

The National Organization for Marriage (NOM) today pledged to spend $500,000 against any Republican legislator who votes in favor of redefining marriage in Minnesota, and will support any Democrat who votes to preserve marriage. NOM’s Minnesota state political fund was the largest contributor to the proposed Minnesota Marriage Amendment (giving over $2.2 million) and has helped defeat virtually every Republican who has supported gay marriage, including three Republican state Senators in New York in 2012.

Republicans like Branden Petersen don’t realize that not only is voting to redefine marriage a terrible policy, it is also a career-ending vote for a Republican. NOM will do everything in our power to defeat any Republican who votes in favor of same-sex marriage. Legislators need look no further than what happened to GOP Senators in New York. Four of them were responsible for passing gay marriage. We helped take out three of those Senators by repeatedly informing their constituents of their betrayal on marriage. They are now out of office. We will not hesitate to do the same thing in Minnesota.

Although they have an inflated view of themselves and their political power, their school-yard bullying antics and silly jokes shouldn’t make a difference this time. The HRC has already dismissed NOM as irrelevant for 2013 due to their lagging polling support and ill-thought investments. So even if they bring out the Benjamins and kill a few careers this year, it’ll surely be their last move. Let’s face it, if NOM’s trying to make themselves relevant for this generation, they’re doing it wrong!