The National Organization for Marriage sent an “emergency alert” earlier this week because “senate liberals have sunk to a new low” and “we can’t let them get away with it.” Most of their message is in bold or italics or both. Clearly, NOM is taking their announcement with the utmost solemnity. 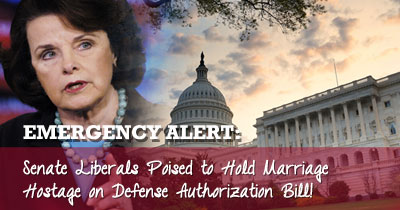 This is NOM's emergency message graphic.

The message, which was sent to its anti-gay marriage donors and which appears on NOM’s blog (which actually is hilarious! The key is to read it like parody, which is actually pretty easy), warns that “Senate liberals,” specifically Diane Feinstein, Pat Leahy, and Harry Reid, are planning to attach the DOMA repeal bill to the 2012 Defense Authorization bill, because that bill “must be passed in order to fund our servicemen and women through the next year.”

This morning, NOM president Brian Brown also posted a letter saying that “thousands responded” to their “action alert.” He also writes that:

“Last week the Judiciary Committee approved the repeal on a party-line vote.

They now say they do not have the votes to pass it. Wow—that is quite an admission after claiming that the majority of people support it!”

Which is interesting, because, according to the Washington Blade, the Human Rights Campaign said that NOM made up claims of the amendment in the first place.

Last week, the Senate Judiciary Committee approved the Respect for Marriage Act, legislation to repeal DOMA, with a 10-8 vote (with all ten votes in favour of it were from Democrats, all eight against from Republicans, and no abstentions). Fred Sainz, HRC’s VP of communications, said that there are, so far, no plans to actually bring the legislation to the floor. According the Washington Blade, he said:

“Their members and their donors are, obviously, upset at their very poor performance. NOM needs to give them a red herring that equals hope or shows that they are working on something no matter how big of a lie it is. They’re trying to raise money with this is what they’re trying to do. They are trying to give the sense that something is going on when this is not something that is in the works.”

Also, according to Chris Geidner, a reporter for Metro Weekly, a Feinstein spokesperson said, “It is not true that Sen. Feinstein is ‘threatening to attach [#DOMA repeal] to the Defense Authorization Bill.” Additionally, according to the Blade, Feinstein said that the bill only has 30 co-sponsors, when it would ideally have 60.

Obviously, NOM lying is nothing new and exciting. Just earlier this month they were exercising their Photoshop skills by turning a 2008 Obama rally into an anti-gay campaign. NOM has also had a few significant losses recently, specifically being ordered by a judge to disclose the names of their Prop 8 donors, not to mention all of those darn openly gay people who keep getting elected to things even though they’re running against perfectly fine bigots and homophobes.

But this time, they lied about there being plans for the bill, which there weren’t, and when it turned out there weren’t, they accused the Judiciary Committee of making up support where there wasn’t any for the plans that themselves did not exist. NOM is, of course, very familiar with the (made-up) strategy of pretending you have support where none exists.