Hello and welcome to another edition of Autostraddle’s College Lesbianage: a glimpse of college life through the wide eyes of six freshly fallen snowflake first-year queers. This month’s update will be given individually! Today Nita has decided that she’s not special after all (even though we disagree).

I sat on the floor of the women’s bathroom in the School of Education building, on the phone with my mom, crying. It was the last day of my last semester of my first year of college, and I was crying because I’d failed. I wasn’t going to continue in the interpreting degree — the degree I’d specifically chosen my college for, the degree I was so sure I’d get in, the degree I’d planned for my entire senior year of high school and, I admit, the one I bragged about to friends and family, relishing the looks of interest on their faces whenever they asked that inevitable, “So what do you want to major in? Sign Interpreting? Oh, that’s so exciting! What made you want to do that?”

Gone was that interest, and in its place a deep, burning embarrassment and sadness. I’d thought I was good enough to be an interpreter, and here I was being told, flat-out, that I don’t have what it takes.

“You’re lucky you had another major and don’t have to start over,” my advisor said. “Though we do strongly discourage our interpreting majors from having any other major since this one is so intensive. But this is one of those skills you either have or you don’t.” The “you don’t have this” was implied, but I got the point well enough. I felt like Mike Wazowski in Monsters University – something that had hit too close to home when I saw it – the part where he’s told “What you lack cannot be taught.” And now I was going to slink back home, tail between my legs, and quietly change my major to something I actually had the potential for.

That was in May. Two weeks later, I was almost fired from my job for mistakes I didn’t really realize I was making until it was too late. And thus continued what was shaping up to be the shittiest month of my life. I was mad at myself and at the department — how, I thought, could they accurately assess what my skill would be like as an interpreter after four years of training and an internship based on two screening exams when I’d barely had a year of sign language?

I do have the potential to be an interpreter. I know I do, and I believe it — I’d just have to find a way around the program to get my certification. And I’d still need a bachelor’s degree. Theatre, while something I love and deeply admire, didn’t seem a viable career choice for me unless it was in playwriting—I am a decent actor and an okay singer, but I don’t have that spark that true theatre people have.

Writing, though. Writing was something I’d been doing ever since my first piece of Scooby Doo fan fiction when I was seven. It was and is something I love and something I know I’m good at. So last week, I made the decision to finally switch to being a full-time English major with minors in Deaf Studies and Theatre. I am slowly coming to terms with this, though I know it’ll be hard next semester going back and seeing people I know still continue through the interpreting program. This summer has not been what I wanted, and looking back, last semester wasn’t either, but I’m holding out hope that maybe now I’m a step closer to where I’m supposed to be. I want to be an interpreter, but now isn’t the right time; maybe I’m supposed to be a writer, something I’ve always wanted to be since I was a little kid.

So I’m looking ahead and trying to be excited. I have my own room and am sharing a suite with one of my best queer friends. My girlfriend is attending the same college I am — something that’s going to be both an adjustment and an amazing thing for us, because Lord knows I wouldn’t have made it through any of this without her. We celebrated our two-year anniversary on the 15th and spent the weekend at Busch Gardens and Wrightsville Beach. 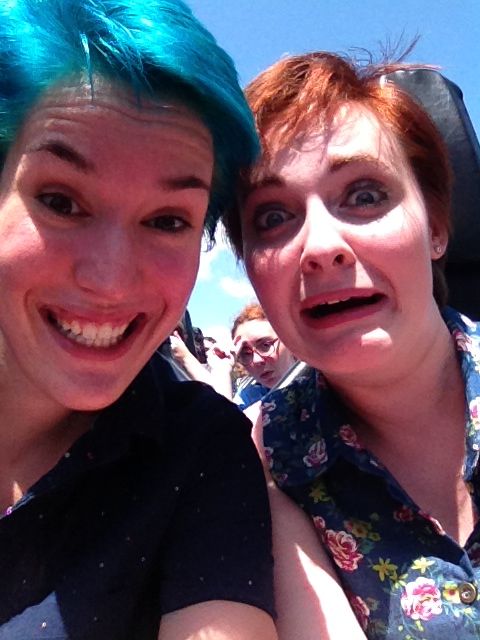 She’s truly helped me through everything and is an amazing person, and I’m excited for what the future holds for both of us. My job performance has picked back up, and I’m starting to prove myself again. So I don’t know exactly where the future is headed for me or what career I’ll wind up in, but I think, for now, I’m gonna be alright.

Nita has written 1 article for us.