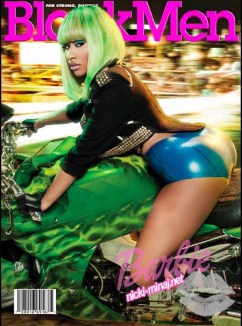 Nicki Minaj is recanting her bisexuality! She tells Black Men Magazine: “I don’t date women and I don’t have sex with women…that’s of course, until Cassie comes available …..” This is in direct opposition to many statements to the contrary and once-upon-a-time rumors that Nicki was once a Queens “Stud” who slept with rapper Remy Ma. That might not be true, but really, who knows anymore? Granted, this is clearly a magazine aimed at a heterosexual male demographic, thus the title “Black Men Magazine,” but gawd REALLY NICKI REALLY?

A few elements of the self-proclaimed “Black Barbie” have fascinated and confused critics. A few months ago, Jonah Weiner wrote on Slate.com about Nicki Minaj, asking Who’s That Girl?

In several songs, rapper Nicki Minaj describes herself as a proud bisexual—she has a special weakness, we learn, for ample-bottomed girls. In others, she is defiantly straight: insisting that she prefers men, dropping “no homo” disclaimers to drive the point home. In “Brrraaattt,” she plays a thug, firing semiautomatic weapons at her rivals. In “Cuchi Shop,” she plays a madam in charge of a stable of prostitutes. In interviews, she announces herself as a would-be role model for young girls. She says she’s from Queens, N.Y., but in several songs she slips into accents that suggest she’s from England or perhaps the San Fernando Valley.

Hip-hop is full of unreliable narrators, but over the course of her short career, Nicki Minaj has taken unreliability to near-whiplash extremes.

Assuming that Nicki is telling the truth, that she’s not really bisexual, this is certainly a huge issue. A large part of her appeal and her career has been her innuendos.

If we take Nicki’s statement that she doesn’t date or sleep with women as a truth, than I think it is fair to be disappointed if not upset how she portrays herself as an artist. She spits lines like “I only stops for pedestrians, or real real bad lesbian,” signs her female fans’ boobs and makes reference to bedding other women.

Female musicians exploiting and then redacting alleged bisexuality is one of our least favorite things EVAH, like when Pink did it and when Christina Aguilera did it.

Tegan Quin has been keeping a tour diary for Paper Magazine, and it’s just PRECIOUS:

I need to pull it together and stop napping. I’ve been in Ireland for four days and so far I’ve napped three times. One of the naps lasted 12 hours. I’m not really a “nap person” in my regular life. In fact I think that naps should only be for babies, the elderly, pot heads and sick people. But apparently I’m all of those things now because I cannot stop napping.

She opens her second diary entry with: “ My name is Tegan Quin and it’s been two days since my last nap.” 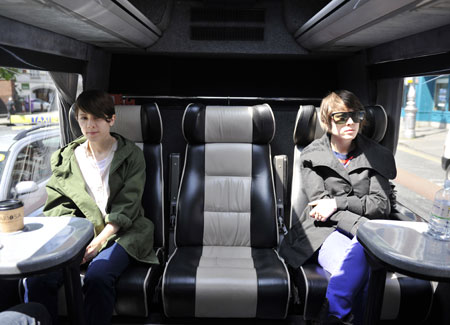 Someone on Big Brother had a lesbian dream about someone else or something.

Logo’s NewNowNext Awards aired last night! The show, which was taped on June 8 in LA, was hosted by Nicey Nash and Cheyenne Jackson. People won things for doing stuff. Some of our favorite people were there! 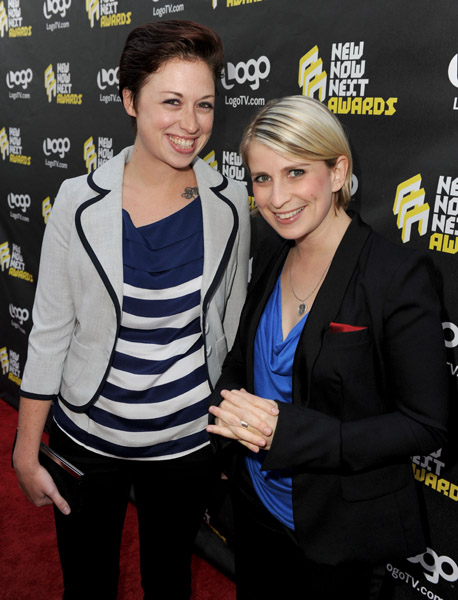 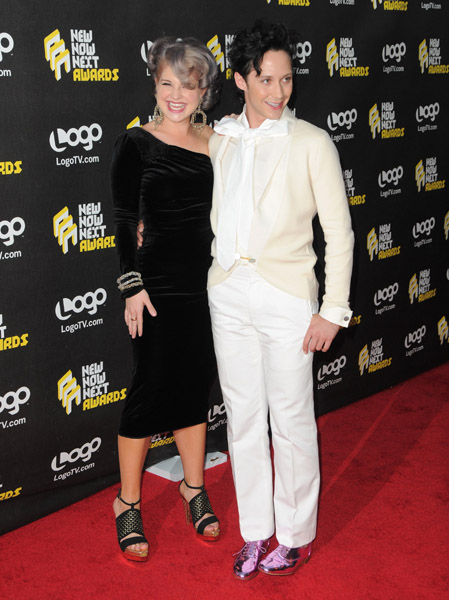 Adam Lambert had a little thing on the NewNowNext Awards. He also cut his hair, apparently.

Check out the NewNowNext blog’s Top 7 moments from the show. Winners included Lea Michele, Johnny Weir and even the tumblr Lesbians Who Look Like Justin Bieber. Paula Abdul, RuPaul, and Aisha Tyler also showed up. We imagine the after party was ridic homofabulous!

Oh and the Real L Word cast was there, too. 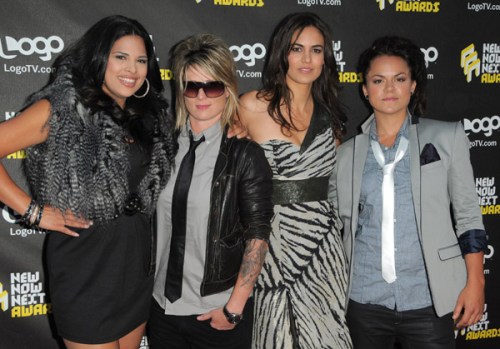 That’s why the people of Pixar are currently America’s most important filmmakers. And that’s why Toy Story 3 is the best movie of the year.

Daily Mail reports: “The eldest daughter of Warren Beatty and Annette Bening is living as a young man after changing her name. Kathlyn Beatty, 18, is now known as Stephen Ira and is said to be planning a sex-change operation.”

Is interviewed in TV Guide Magazine about The Real L Word and the possibility of an L Word Movie.

TV Guide Magazine: Is there still an L Word movie in the works?
Chaiken: I would love to do an L Word movie. It’s about when I can find the time to write it. I know what the movie is. I know that my cast really wants to do it.

TV Guide Magazine: Except Mia Kirshner.
Chaiken: She doesn’t want to do it.

TV Guide Magazine: Well, her character Jenny is dead.
Chaiken: Exactly. Mia’s not happy about being dead. I think she should have embraced it. And I was sad that she wasn’t into it. But everybody else is dying to do it.

TV Guide Magazine: If you do the movie will we find out who killed Jenny?
Chaiken: If I were to do an L word movie I would like it not to be about who killed Jenny but have a very different storyline. It would be more like the beginning of the show and the celebration of lesbian life and romance, that comedy of manners.

TV Guide Magazine: Is your L Word spinoff with Alice imprisoned for killing Jenny completely dead?
Chaiken: Yes. And since Showtime didn’t pick it up, I’m going to say that Alice did not kill Jenny. That was a little disappointing because I thought we made a really good pilot. And it wasn’t an L Word spinoff really. That one character was in it but it was a very, very different show.