NEW JERSEY: In a surprise move, the New Jersey Senate has scheduled a vote on the same-sex marriage bill for Thursday. Odds of this bill ever seeing the light of day, let alone passing, seemed about 0 yesterday, so this is great news. (@dailyrecord) 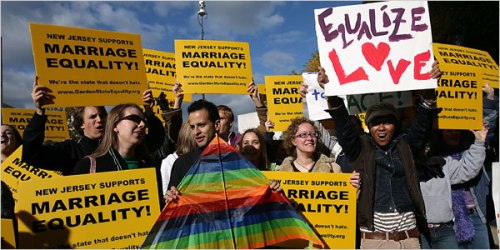 If there were ever sounder words of advice for New Jersey’s state senators, who will vote on gay marriage legislation tomorrow, it is this: Learn from New York. Because while most are, at best, cautiously optimistic the the Jersey legislature will pass the bill, merely bringing it to a floor vote will have the effect of total transparency — knowing exactly where each lawmaker stands on gay rights. Or, more accurately, where each stands on eliminating discrimination. That’s the hard lesson being learned by New York’s Democratic senators, who bungled the marriage vote, and those who voted “no” now facing the wrath, and financial fury, of gay activists and supporters.

Lest anyone ever say “hey, that’s a good idea what you did there with that campaign,” The New Jersey Star-Ledger complains in its article ominously titled “Gay marriage in N.J.: Political missteps make it a long shot“:

Garden State Equality, the gay rights group that has marshalled such impressive support for this, went overboard by threatening wavering Democrats and sending protestors to their homes. That backfired.

The New Jersey legislature is in a race against the clock, though. Governor John Corzine, who has promised to sign the bill, leaves office on January 19. Luckily, the Jersey House has promised to vote on the bill Monday, should it make it past the Senate (unlikely) although there are 23 Democrats and 17 Republicans in the NJ state senate.

We’ll keep you updated on that vote tomorrow. (@dailyrecord)

YOUTH: Doesn’t it drive you insane when Right-Wing pundits wax nostalgic on a “simpler time” when rich white men had more power than they have now, but everyone else was miserable? Me too. The Daily Show has put together a little something to investigate this “simpler time,” and you must watch it right now. even George Lucas complemented Jon Stewart on this segment during his interview!

RHODE ISLAND: The Rhode Island legislature has overridden the governor’s veto of a bill that gives funeral rights to same-sex couples. The bill was written after Mark Goldberg was unable to take custody of his partner’s body from the coroner. The governor had objections because the bill was a step closer to legalizing gay marriage.

“This bill represents a disturbing trend over the past few years of the incremental erosion of the principles surrounding traditional marriage, which is not the preferred way to approach this issue,” Carcieri wrote in a letter to lawmakers.

PROP 8: The Prop 8 trial will be broadcast on YouTube. Thank god, because it’s really hard to liveblog without video! Some lawyers in the trial objected for fear their witnesses would be harrassed, but the judge thought the issues at hand had too much national relevance. The trial starts Jan. 11. (@businessweek) 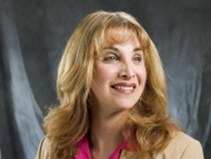 SIPPY CUP: Sydney mothers accused of kidnapping their own children – “It is alleged the children were collected from their carer in October last year, supposedly to attend a friend’s birthday party, but the women failed to return the children to care.” I bet creator and executive producer of Showtime’s hit series The L Word is feeling very oracle-like right now for all these lesbians kidnapping their own children. (@mvc)

FIRST!: Amanda Simpson is the first transgender presidential appointee. “I’d rather not be the first, but someone has to be first, or among the first. I think I’m experienced and very well qualified to deal with anything that might show up because I’ve broken barriers at lots of other places, and I always win people over with who I am and what I can do.” (@ms.magazine)