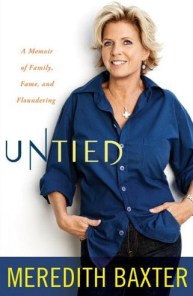 Meredith Baxter is doing the talk show circuit promoting her memoir, Untied, with appearances on The Today Show and Oprah. The inevitable soundbite is where she describes her second ex-husband, David Birney, physically abusing her.

“It was so sudden and unexpected, I couldn’t tell you which hand hit me, or even how hard. I do recall thinking, I’d better not get up because he’s going to hit me again.”

She says she drank heavily to cope with the abuse, but has been sober since 1990. Why didn’t she get out of a marriage she calls abusive?

“I didn’t know I had a choice. I didn’t know I could go…it wasn’t an accident we were together. For him to be who he needed to be, it had to be someone who was kind of mousy and quiet and retiring, and that’s who I was.”

Meredith came out in 2009 and has three children with Birney.

Lady Gaga talks some personal sex details in the new issue of Grazia:

“I didn’t lose my virginity until I was 17. But I have to say even then I wasn’t ready and it was an absolutely terrible experience. It wasn’t good at all. I never actually enjoyed sex until two years ago. It was a proper monogamous relationship in which I felt free enough to trust and I had enough self love. I have never not had safe sex, I have always asked a guy to be tested and to use protection, which was always my rule… otherwise, you’re playing Russian Roulette.”

“I miss being on set. I really do miss it. I know there’s going to be a lot of steps I’ll have to go through to prove myself again and get the trust from people I respect to work with, but I’m willing to do what I have to do to get there. That’s what I aspired to do my whole life, and personal instances in my life have gotten in the way. But I don’t want that to be what I am known for, the tabloid stuff, that’s not me. I don’t like the attention. I don’t want my attention to come through my films and the work I am doing, not from going to the hair salon.”

Lock up your daughters and hide your wives. Showtime has announced that Season 2 will premiere on Sunday, June 5th for nine more episodes of lesbian wonderment. The official cast list hasn’t been made public, but it should be out by end of the month. We already know but we’re not allowed to tell you.

Elizabeth Hurley will play Wonder Woman’s nemesis and there might be some lezzie action involved which will likely not satiate us in the least, as these things rarely do.

Daisy Lowe is a “mild lesbian.” I don’t know what that means.