In My Top 10 Television Characters, various members of Autostraddle’s TV Team will be telling you about the TV characters nearest and dearest to our hearts, EVEN the ones that aren’t lesbian / bisexual / or queer. Today, Autostraddle Intern Riese shares her favorite characters. 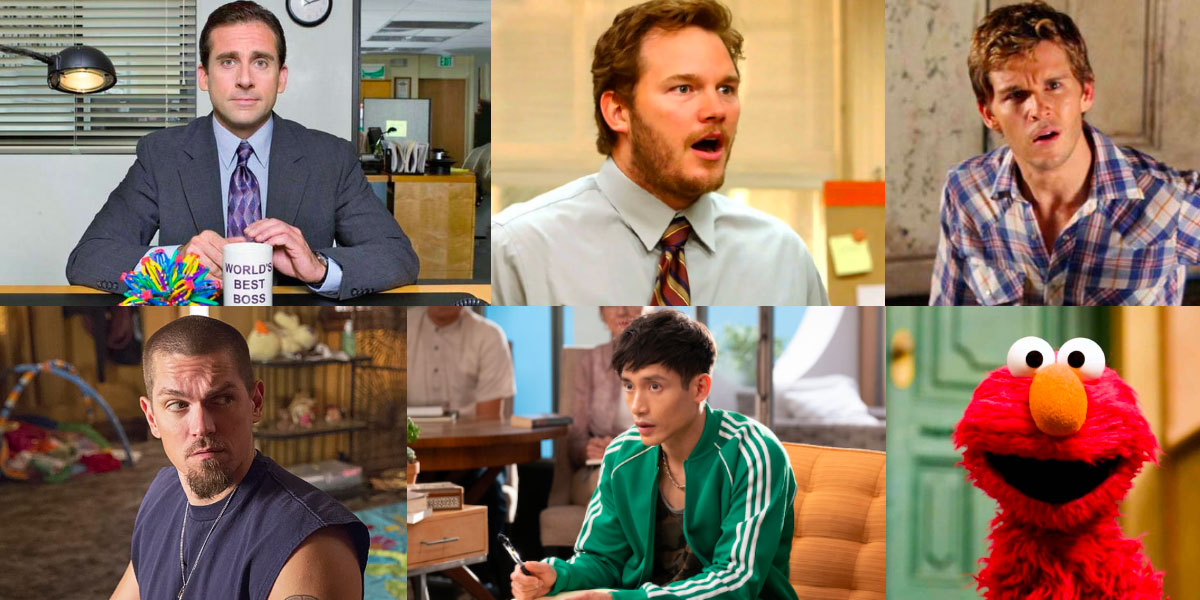 Image description: Six images in a collage. Michael Scott from The Office, Andy Dwyer from Parks and Recreation, Jason Stackhouse from True Blood, Kevin from Shameless, Jason from The Good Place and also Elmo, a red puppet with his mouth open.

As I was thinking through my picks for this project, I realized that a lot of the characters that came to mind — the kinds of characters I would enjoy seeing clips of in a YouTube compilation, for example — are… idiotic men? You know: men who’d probably fall into a manhole or die of scurvy without the smart and patient women in their lives. Underneath their confused exterior lies a heart of gold! For example: Andy Dwyer (Parks and Recreation), Kevin Ball (Shameless), Jason Stackhouse (True Blood), Gary (Veep), pretty much all of The Muppets. Also I sometimes… relate to Michael Scott? I want everyone to like me, I’m not very good at getting people to like me, and also… I am down to clown. 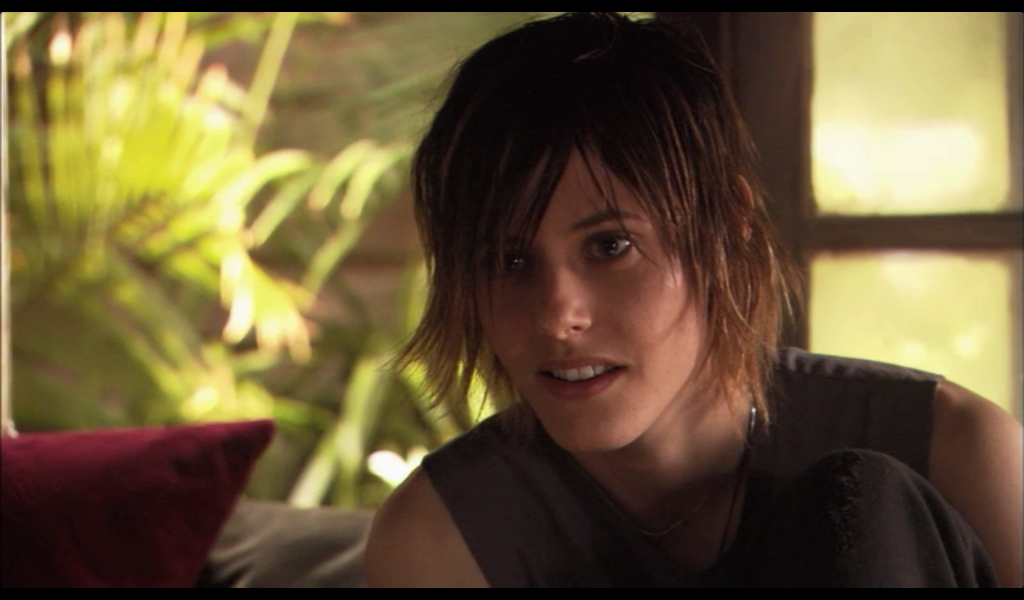 Image Description: Shane, a hot lesbian in a muscle tee with a very 2007 haircut, is looking intently at somebody, probably a girl let’s be real. The L Word.

How can I not give a minute to the legendary scrawny smoky-eyed shaggy-haired stylist and lover to the stars who jumpstarted my internal journey towards lesbianism and this very website? Shane gets a bad rap, but while re-watching for To L and Back, I am resolute in my position that she doesn’t deserve it. She can be avoidant or a pushover, but generally speaking she’s upfront about who she is and what she wants. She’s been through a lot of trauma. She’s an incredibly loyal friend. She respects boundaries. I love all these things but most of all, believe it or not, I thought to myself often WOW this woman is hot! I’m impartial to Generation Q Shane, but the original will always have a special place in my heart and low-rise pants. 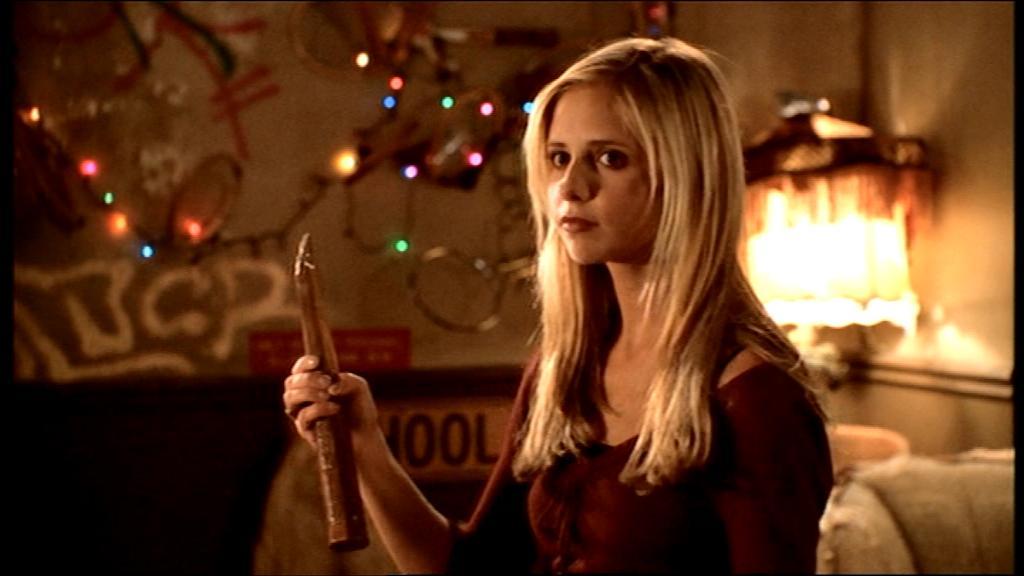 Image Description: Buffy Summers, a slayer of vampires, holds a stake. She’s inside a house that has weird Christmas lights and lamps and signs and stuff.

Faith: “I’m looking at you, and everything you have, and I don’t know, I’m jealous. Then there I am. Everybody’s looking to me, trusting me to lead them and I’ve never felt so alone in my entire life.”
Buffy: “Yeah?”
Faith: “And that’s you, every day. Isn’t it?” 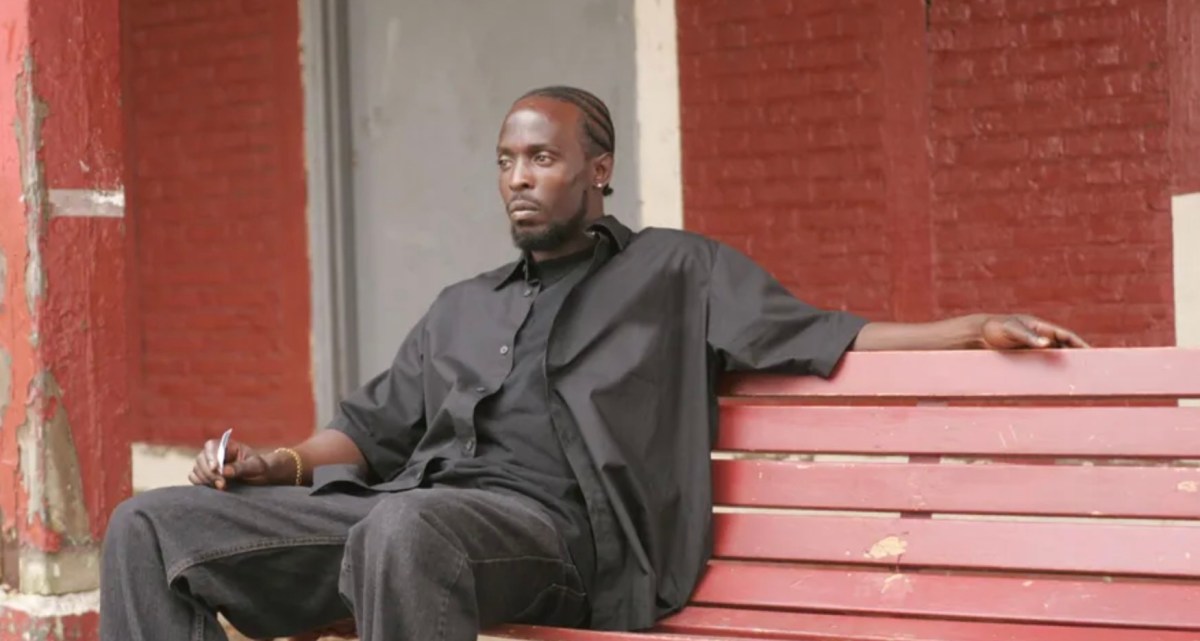 Image Description: Omar Little sits on a red bench in front of a red brick building, wearing all black. He looks pensive.

Constructing this list was difficult — do I include characters who meant a lot to me for specific personal reasons, or characters who I feel were objectively some of the best constructed in television history? I ended up going mostly with the former, but Omar stood out amongst my candidates for the latter. (The runner-up for my quality character slot: Ruth Fisher from Six Feet Under.) At the time, the idea of a hyper-masculine character involved in the universe of drug dealers in inner-city Baltimore being unapologetically and openly gay was virtually unheard of, and he emerged quickly as one of the show’s most specific and complicated characters. In a story often defined by impulsive, shocking or uncharacteristic choices, Omar disrupted the game and the narrative with a specific ethical code and a philosophical approach to his work. I mean…. “I got the gun, you got the briefcase” — that whole scene was PERFECT. (Also um, everything Natalie said) 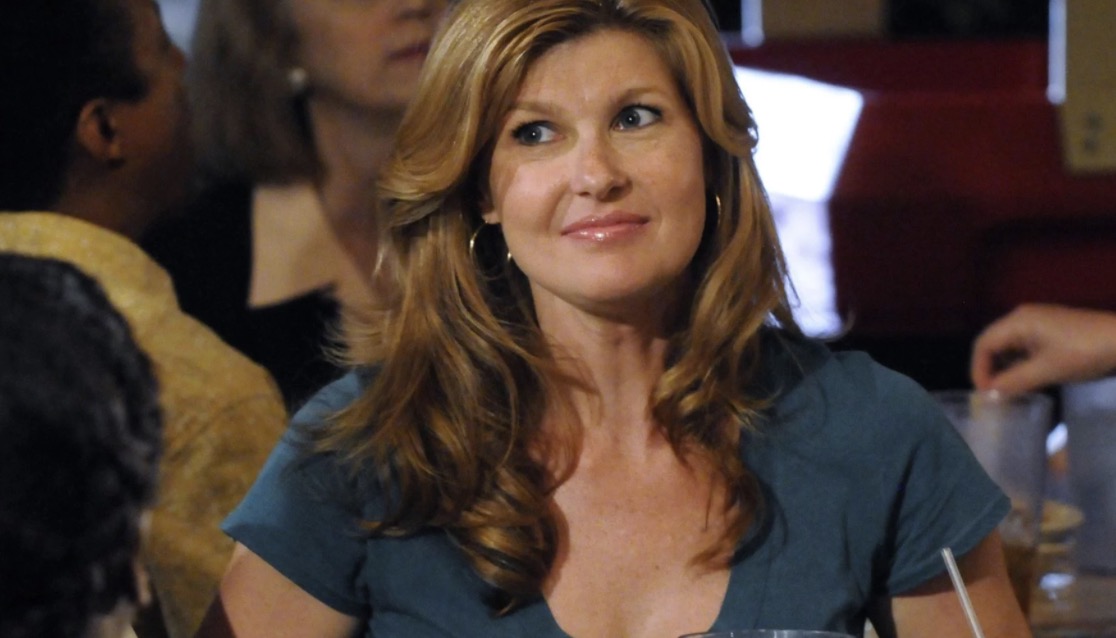 Image Description: Tami Taylor in a teal v-neck at what looks like a team celebration at a bar

I didn’t expect a show about football in small-town Texas to portray maybe the first fully drawn, authentic marriage I’d ever seen on television. Most relationships between men and women are painted with only the broadest of strokes, but Friday Night Lights colored everything in. Is Tammi Taylor a very hot Mommi? Yes. That cannot be denied. But she’s also so ambitious and funny and smart and so diplomatic. She stands her ground while making the right amount of room for yours. She balances a healthy skepticism of football’s centrality to her local culture with support of her husband and the boys he coached. Also, her eldest daughter is insufferable and yet she rises. Feminism! 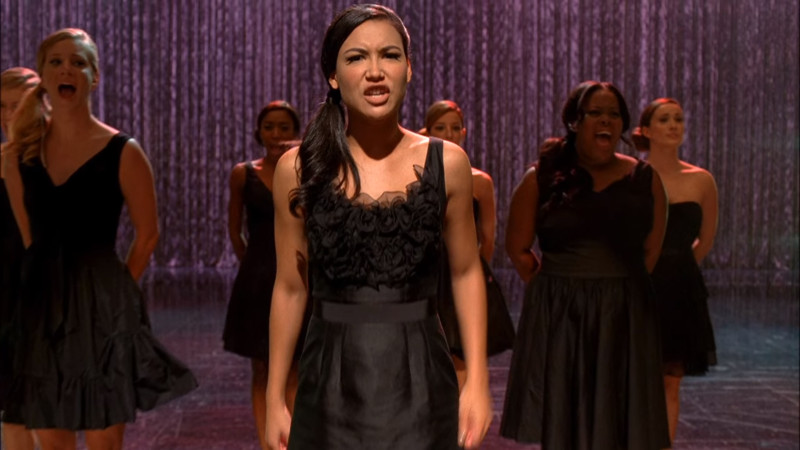 Image Description: Santana on stage in a black dress belting Rumor Has It. The Troubletones (Brittany, Mercedes, random extras) are behind her, wearing black dresses.

I have kept the “5” spot open for hours know as I slowly slip from consciousness into being basically half-asleep. I kept Villanelle here for a while, Emmet Honeycutt spent some time in this area, Poussey, etc. I’m gonna go with our girl. You can read all about it here. 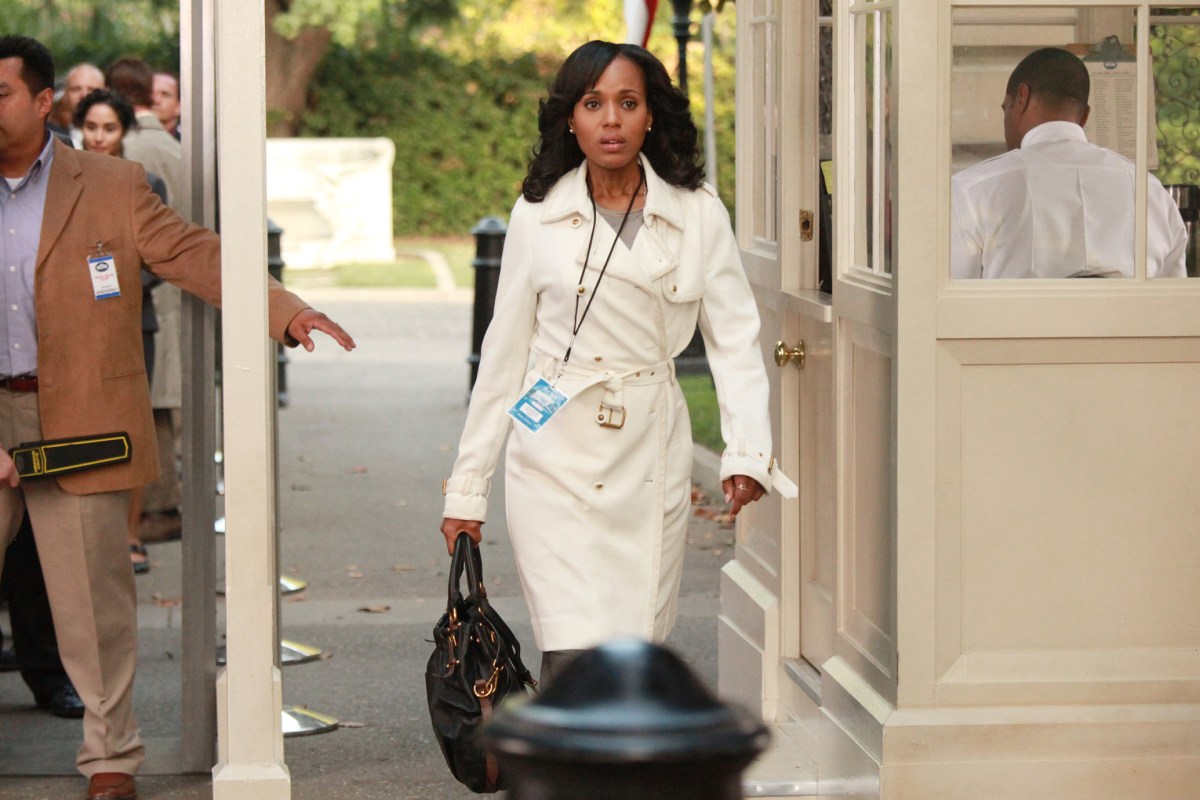 (Photo by Richard Cartwright/ABC via Getty Images) (Image Description: Olivia Pope is wearing a hot white trenchcoat situation and walking past a guarded gate. Everybody else is going through the metal detector BUT NOT OLIVIA. She’s walking quickly with some kind of pass around her neck. She looks very hot and busy.)

Sometimes before business meetings we were nervous about, Alex and I would have a mid-afternoon cocktail while repeating a mantra to ourselves regarding the importance of channeling Olivia Pope. I’m chronically indecisive but Olivia Pope always knew exactly what to do, or knew at least how to give the impression she knew exactly what to do. Olivia Pope had a kind of confidence and power rarely granted to female protagonists but distributed gratuitously amongst the men of television. As Natalie writes so eloquently in her Top Ten, “power tends to corrupt and absolute power corrupts absolutely… and Olivia Pope is no exception.” 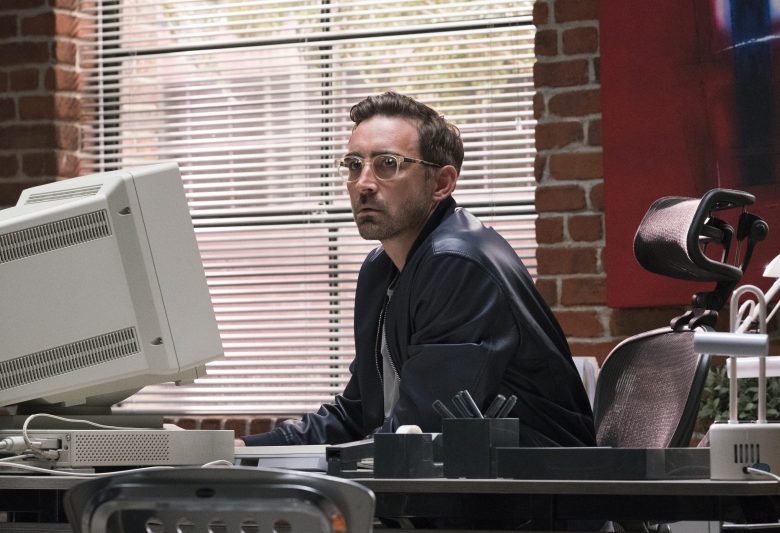 Image: Tech entrepreneur Joe MacMillion sits at a desk in front of a large computer, in the 90s. He’s wearing a leather jacket and glasses. The walls are exposed brick, it’s the big loft office space.

Two weeks ago I had Cameron Howe on this list. One week ago it was Donna. And after I finished a recreational re-watch of the entire series, I surprised myself by landing on Joe. He’s charismatic, he’s nimble, he’s brilliant, he’s overbearing, he’s impulsive. Of all the central characters in this universe, he’s got the furthest to climb into what his peers would call “integrity,” but he sure does get there. But I’m also not sure that it was ever lacking, for me. Ultimately despite the slick exterior, he’s relentlessly loyal to the vision above all else. Certainly above himself. It’s not really about the money, although that’s part of it. He wants to live on the cutting edge, he wants to be in the room where it happens and he is uniquely capable of identifying and fostering talent and pushing it in that direction. I think he and Cameron keep coming back to each other because they both love to think really hard forever and they’re both so bright. Everything he does is in service of “the thing that gets you to the thing.” In some ways I think his bisexuality — which he generally had to obscure to succeed at that time — is often what keeps him a little more humble than the typical handsome white cis male smooth talker. Any queer person can relate to that, how it puts you just far enough outside of things to see what people on the inside can’t touch. His scenes with Haley in the final season make me wish I didn’t hate the word “tender.” 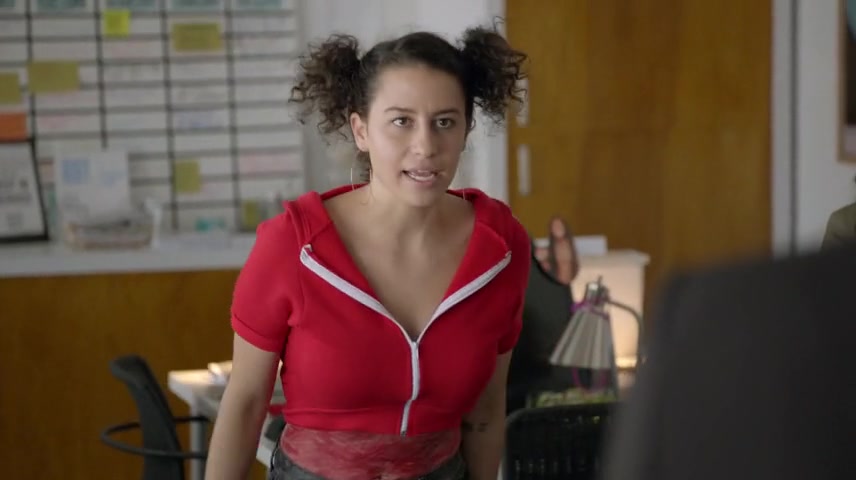 Image Description: Ilana is wearing a hoodie that’s actually a dog hoodie, and also she has little pigtails. She’s at work and is mouthing off to her boss.

I think a theme of this list is that I’m drawn to confidence — overconfidence, even, especially when it veers into the absurd. llana is so fucking hungry and horny and hilarious. She has appetites and believes strongly in her right to satiate them. She’s loud and in love with her best friend and starving for adventure above anything resembling pragmatism. She wears crop-tops and flannels and boy’s underpants and dog hoodies, maintains a full bush, smokes copious amounts of weed, falls hard for every executive-class woman in a power suit, yells at strangers about the patriarchy, is pretty sure everyone else is queer too and has the closest thing to a bisexual bob a curly-haired Ashkenazi Jew could ever hope for. 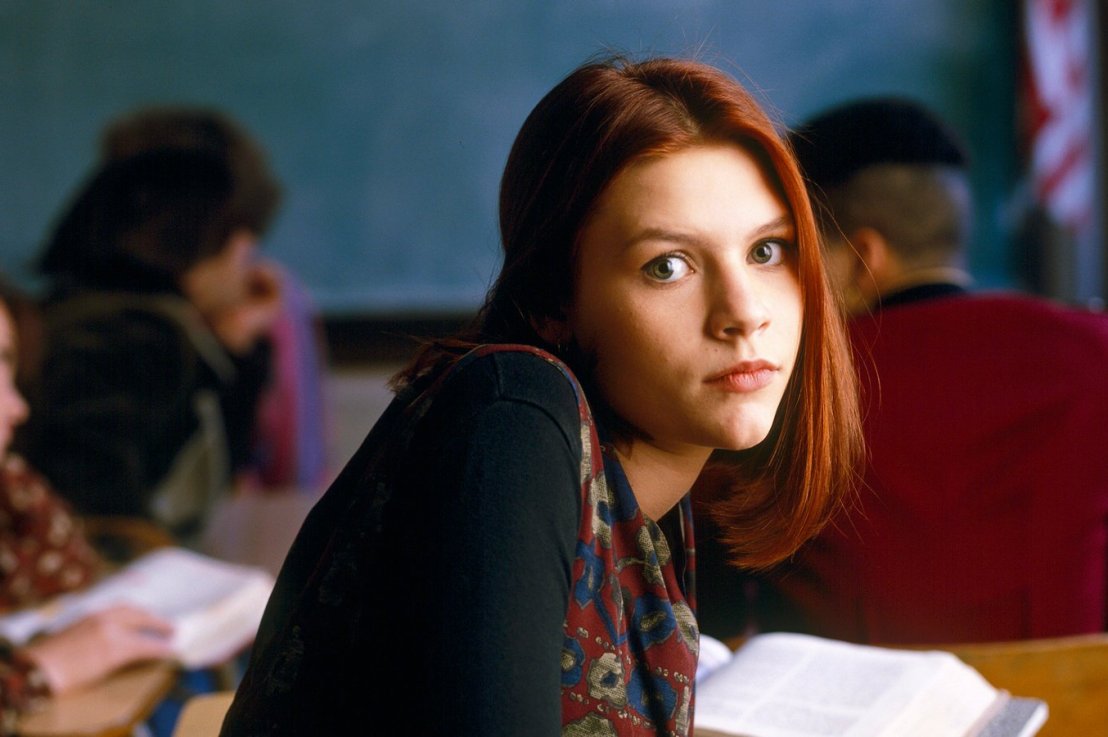 Image Description: Angela Chase, a teenager with red hair in the mid-90s, stares at the camera in a classroom. It’s blurry behind her but you can still recognize ricky and brian’s backs.

I can’t talk about myself about my life about being 13 without talking about when Angela Chase was 15 and it was 1994 and all of our parents had protested actual wars or sometimes even fought in them and we were just kinda-pretty white girls with baby-doll dresses and flannels that swallowed our bones and pretty decent lives and epic endless wells of longing. Just one long longing. I mean I dyed my hair like her. Everything else I needed to be Angela Chase I already had. The crush on a mysterious idiot, the parents fraying at the seams, the relentless over-analysis, the intoxicated/intoxicating best friend. “It’s such a lie that you should do what’s in your heart. If we all did what was in our hearts, the world would grind to a halt.” MY QUEEN

sign up for our newsletter
Related:My Top 10 Television CharactersTV review

Riese has written 2856 articles for us.

If every person who read Autostraddle today gave just $1.75, we’d meet our goal. Only 1% of our readers support, will you be one of the ones who do — whether that’s for you, or for the next person who needs to find us?