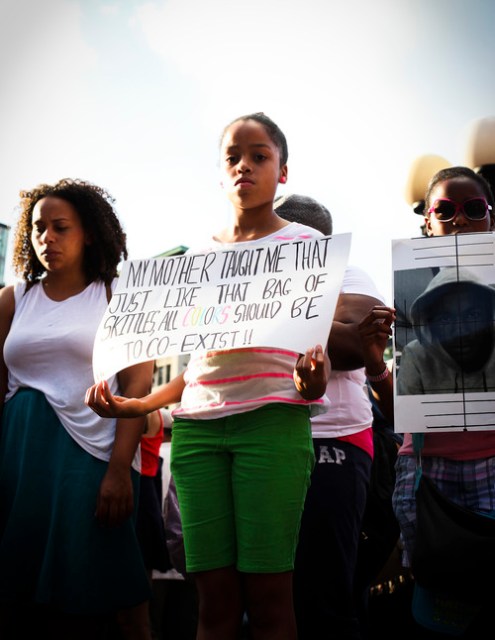 A gathering of hundreds turned into a march of thousands Sunday in New York City, where there was a mass gathering in Union Square to rally against Saturday’s verdict in the Zimmerman trial.

George Zimmerman, as all we know by now, was found not guilty for the murder of 17-year-old Trayvon Martin. Martin was unarmed and alone when he was shot in the chest by Zimmerman in February 2012 in Sanford, Florida. Although many are rightfully appalled by the verdict, few who have encountered or observed this country’s (in)justice system can truly consider themselves shocked. In a nation whose pre-eminence relies on the fragile balance between White Supremacy and mass complacency towards it and calls that balance “justice,” it should come as no great surprise when Black bodies are disregarded as valid.

If indeed, America’s dominance relies on that delicate balance, it’s safe to say that Sunday, we began to tip the scales. I have yet to find truly accurate or consistent numbers that reflect the turnout of the march, so for now let’s leave it at “enough to shut down Times Square.” Protestors took the streets at about 6:30pm for an un-permitted march that snaked through the streets, weaving through cars, buses, and trucks, soliciting support from drivers, tourists, and residents, some of whom left their posts on the sidewalks to join the thousands. A little before 9, the march entered Times Square, rallying around various speakers posted on tables, mailboxes, and lamp posts, holding the space until 9:30 when the crowd began to dwindle.

Exhausted after three hours of marching, many headed home, while a few hundred marched on to Harlem – the entire marched covered upwards of 100 blocks – almost six miles over the course of 12 hours. 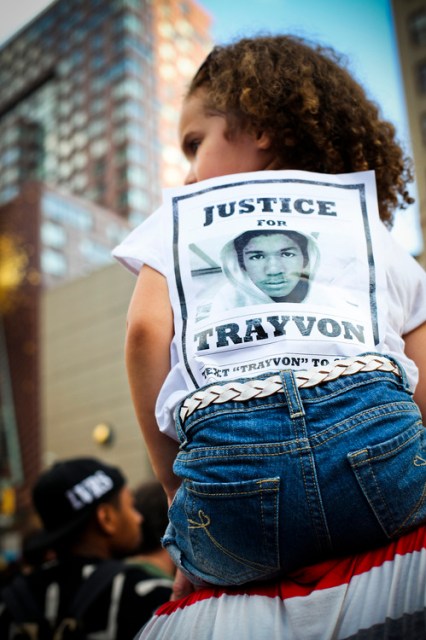 The protest was entirely nonviolent, except of course for the part of the NYPD, who stalked participants through the Upper East Side, pepper spraying a woman (who went on to rejoin the march) on Lexington and making about a dozen arrests.

While this action was scheduled in direct response to the acquittal of Trayvon Martin’s murderer, this mass movement was of course provoked by much, much more. In a gathering of thousands, we found a reflection of ourselves. In a demonstration that encompassed a stronger, vaster presence than we ever could have imagined, we found a physical manifestation of our private grief, fear, sorrow, and rage. 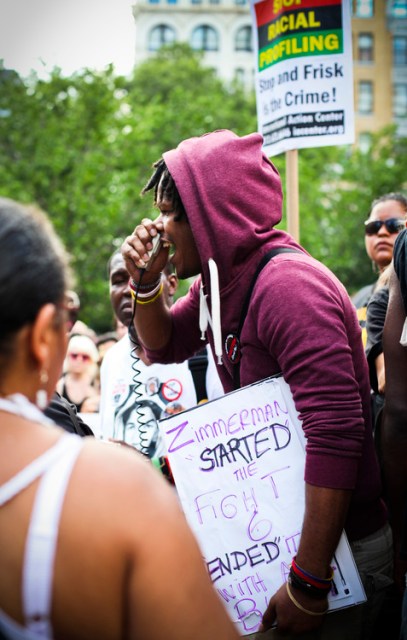 We walked through our city full of fury because the verdict of the Zimmerman trial gave us evidence of what we always knew: that that some lives were not meant for this system, or rather, this system was simply not meant to protect certain lives. We knew always some are more valuable than others, that our justice system is a painful misnomer, that many of us – especially those who are young and Black – are unsafe in our own homes.

But we know something now that we didn’t always know before: we are not alone.