Once upon a time, I was a Geography major. I’m not anymore, but that’s more of a technicality—I still get to be on the Geography department bowling team. Anyway, part of what hooked me in to geography was that we got to draw maps. I’ve always loved maps. There was a wood puzzle of the United States at the local library that I did over and over again as a child, and the first time I was allowed to go to New York City by myself, I created an elaborate map of all the places my friends and I would go so we wouldn’t get lost. Maps help you figure out where you are and where you’re going, and they tell you where you are and what’s around you. You can buy maps, you can draw maps and you can create them using complicated software. 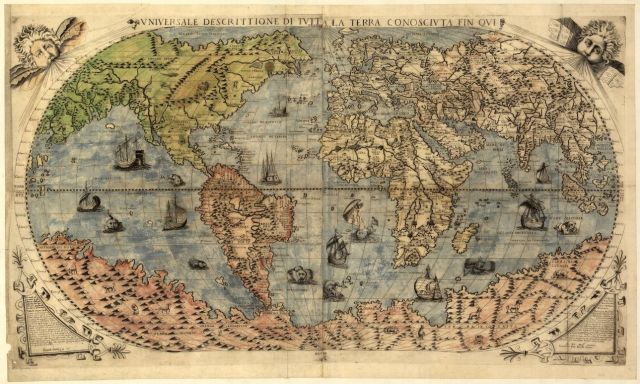 You can also paint them and use mythical sea creatures to notate uncharted waters. via davidkirkaldy.com

Also, maps are weird because they essentially put a 3-D object (the Earth) into 2-D. This is the rough equivalent of trying to make an orange peel lie completely flat. It can’t be done accurately. This means maps are kinda fucked up, because they go ahead and make the Earth flat anyway, stretching things out and crunching things together. The most classic example of how this distorts things is that in many standard world-map Mercator projection situations, Greenland appears to be the same size as Africa, when actually Africa is WAY bigger. 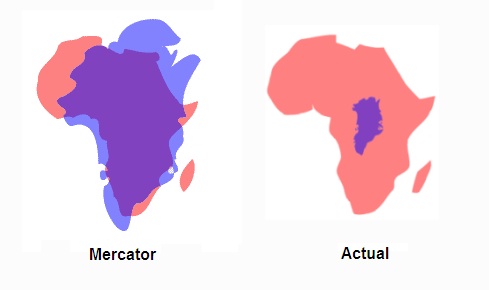 Not an insignificant size difference. via pratham.name

So maps are malleable, which means they are fun to play with! The internet has come up with a lot of great ways to play with maps. Here are some of my favorites:

If you’re in for a challenge, try GeoGuessr. It will take you to a random spot in the world via Google Street View, and your task is to guess where you are. 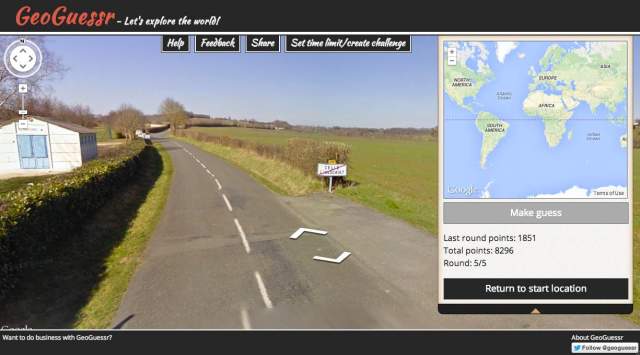 Where in the world is this lovely French-speaking countryside?

Use the arrows to move along the roads and ascertain more information about where you are. Road signs are really useful for this. You get points based on how close to the actual location you get. Sucks when you think you’re in Texas but turns out it’s really Australia. 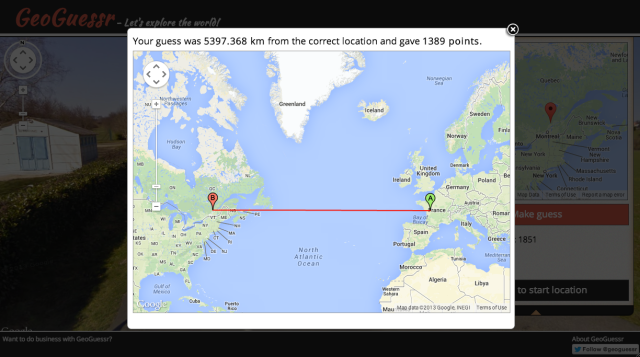 I tried to be tricky so I guessed somewhere in Quebec instead of France. I was wrong.

Pro tip: Google Street View has spread quickly (one time I saw a Street View car at mountaintop ruins in Oaxaca, Mexico), but it is not actually everywhere around the world yet, so you are way more likely to get some places than others – hotspots are the US, Canada, Brazil, Australia, and Russia.

If you’re more of a Sporcle “pick out the countries and capitals” kind of person, try Click That ‘Hood. It’s a guessing game for different regions and cities. The first time I saw it, I dismissed it as a prettier Sporcle rip-off, but I actually think it’s way better. When you guess wrong, it tells you the right answer and you can try again, and I’ve found that this is actually helping me learn the locations of countries I should have already known. 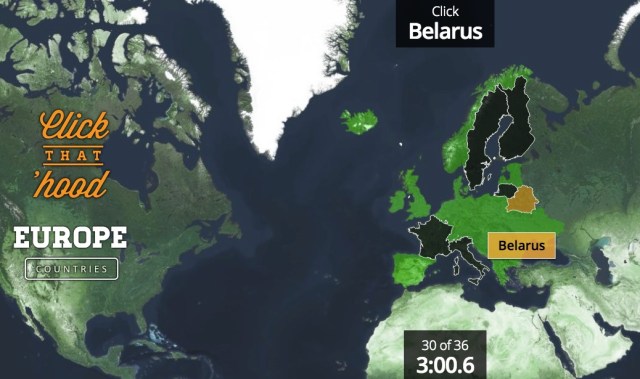 It’s not just countries, either – Click That ‘Hood has games for city neighborhoods all over the world, and a few really random ones where you have to guess different stadiums and airports around the US. 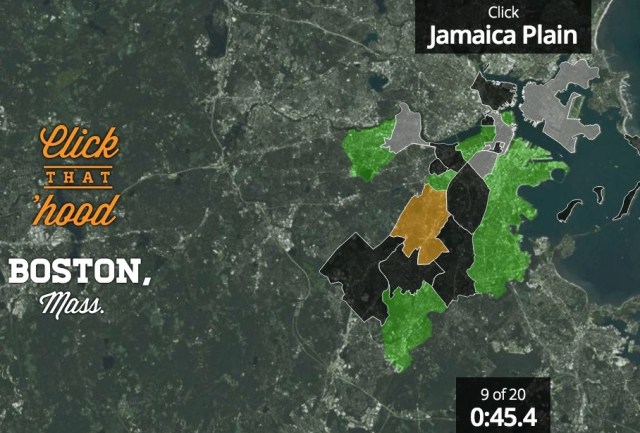 Click that ‘Hood won’t offer you a forum to debate if Jamaica Plain is the lesbian capital of the world, but it will help you locate it on a map!

Pro tip: you can use map data to add new places, if you know about that kind of thing (and it even has instructions if you don’t!).

MapFrappe is not really a game, but a cool investigation in spatial comparisons —”cartographic mixtures,” says site creator Kelvin Thompson. Create an outline anywhere in the world using Google Maps, and then you can move that outline anywhere else in the room to see how they compare, size-wise. 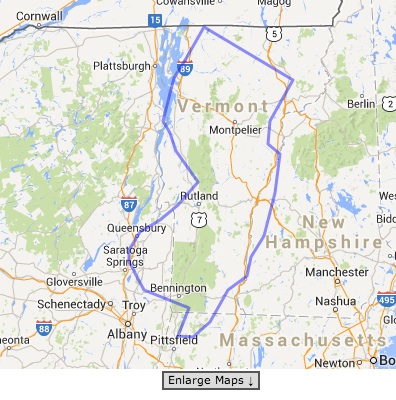 Things I learned on MapFrappe: New Jersey is roughly the same size as Vermont.

This can easily take up half your day. 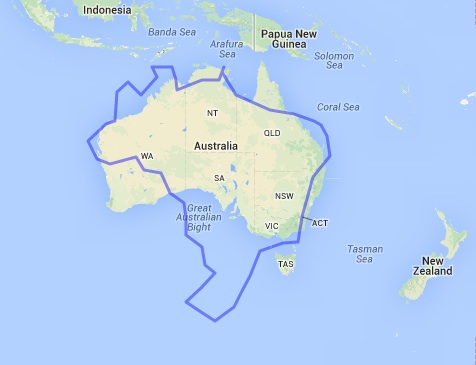 Things I learned on MapFrappe: Brazil is slightly bigger than Australia.

Hooked on maps yet? Learn more via the magic of the West Wing:

This has been the sixtieth installment of  Queer Your Tech with Fun, Autostraddle’s nerdy tech column. Not everything we cover is queer per se, but we talk about customizing this awesome technology you’ve got. Having it our way, expressing our appy selves just like we do with our identities. Here we can talk about anything from app recommendations to choosing a wireless printer to web sites you have to favorite to any other fun shit we can do with technology.