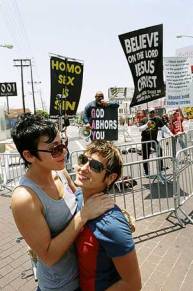 Tomorrow is Election Day! If Maine wins on gay marriage tomorrow, it would be the first time voters in the US approve same-sex marriage! So basically the world could change on Tuesday, just like that Tuesday in the 90s when Lauryn Hill’s The Miseducation of Lauryn Hill came out, that was the first time I ever pre-ordered a record OH RIGHT THIS IS POLITICS: I have been to Maine, it was so beautiful & Phillip lives there! Srsly life-changing shit could happen.

If Question 1 is rejected, it would be the first time voters in the US have approved Same-Sex Marriage!

Tomorrow a rally will be held in Monument Square to show support for gay marriage.

Maine to Vote on Same-Sex Marriage: Public opinion surveys in Maine show a dead heat on Question 1, which would cancel the marriage statute that passed the legislature in May and was signed by Gov. John E. Baldacci (D).

If Question 1 passes, Maine — like California — will have legislated inequality: “The National Organization for Marriage, or NOM, has contributed $1.6 million to Stand for Marriage Maine but has declined to reveal its own contributors, despite a federal district court decision last week that it must do so under Maine law.”

538: Marc Multy, the president of the anti-gay marriage group Stand for Marriage Maine, said his opponents “amassed a war chest from the homosexual political elite from nearly every corner of the country to impose their will on Mainers like us.” Erum but no. It’s true “No on 1 raised more than $2.30 million in itemized contributions from outside the state of Maine; this is more than the $1.82 million that Stand for Marriage Maine has raised from out-of-state” … However, all told, No on 1 has raised 43 percent of its funds from within Maine, as compared with 26 percent for the Yes on 1 campaign.

Catholic Church Goes After Straight Allies of Marriage Equality: “Though it’s no fun seeing same-sex marriage rights placed on a statewide ballot, one of the best things to come out of the Maine vote on marriage equality is the fact that progressive-minded  Catholics are starting to speak out for the rights of gays and lesbians to marry.”

Washington Referendum 71, nicknamed “everything but marriage”:

Referendum 71 asks voters to approve or reject a bill passed by the Legislature and signed by the governor this spring that would extend to same-sex couples scores of rights currently reserved for married spouses, including ensuring extended work leave for people with critically ill partners and preserving pension benefits for the surviving partner in the event of the other’s death. (@ny times)

This week, the Washington Poll, released through the University of Washington, found even stronger support for the “everything but marriage” law, with a 56-39 lead, with 5 percent undecided. (@washington times)

RIP: Phoenix-based transgender rights activist Michele de Lafreniere died Saturday. Pam’s House Blend has a great tribute, which gives some history about her activism and why she was important to the LGBT community. Today, we lost a woman who started something huge… She never gave up. She was reduced to a point where she couldn’t speak, could barely move, and yet she cried in joy at the passage and signing of the Hate crimes bill.

NFL: Kansas City Chiefs running back Larry Johnson was suspended from the team last week after using a gay slur on Twitter and in the locker room. He also was fined by the NFL. His agent said Johnson didn’t realize the word was offensive. The controversy has shined a spotlight on the homophobia in locker rooms throughout professional sports. Former NFL player Esera Tualo, who came out after he left the league, says there are at least ten closeted football players in the NFL right now, probably more. While the league is trying to improve the situation, Tualo and other authorities said they have no idea when players will feel comfortable enough to come out to their teammates. In better sports news, the Cubs are now the first major league sports franchise to have a gay owner.

GAY ANIMALS: An Illinois teacher was suspended after he had his class read about homosexuality among animals.

HOUSTON MAYOR: The Houston mayoral race is coming up, and the city has the chance to elect Annise Parker, who would be the first openly gay mayor of a major city. The Houston Chronicle found a lot to like about Parker, but listed her sexual orientation as a con. Sad, but probably true.