When I first came out to myself two years ago, I didn’t know how to love the women who looked like me. I barely knew how to accept my same gender desires, but at least the TV shows, movies, and books that lauded ivory-skinned beauties with hair that grows and flows down taught me how to lust after white women. But, loving, lusting after, dating, fucking, playing with, and appreciating the women with dark(er) skin, and kinky hair (or braids, or perms, or weaves), who were taught, like me, that their curves and edges were undesirable proved a mystery to me. Our histories, victories, pain and truths often mirrored one another’s; we had learned at least to be sistahs in solidarity. However, it sometimes hurt so much just to love myself that I wasn’t sure it was possible for Black women to actively love each other. Romantically. With all the butterfly feelsies. For every Black woman who turned my world upside down, and then subsequently turned it right side up, I would wonder if our hearts had enough room for the beauty and ugliness — the joys and sorrows — of the other’s Black womanhood.

A few days ago, I engaged in a conversation with a group of women of color who were discussing Angel Haze’s relationship with Ireland Baldwin. While most of the women were happy for Angel Haze, a lot of them were disappointed to see yet another queer Black woman dating a white person. The problem wasn’t that dating white people is wrong or inherently a negative experience for women of color; the problem wasn’t even that Alec Baldwin has said some nasty homophobic and anti-Black comments because the sins of the father don’t necessarily make Ireland Baldwin a bad person. What saddened these women was that the prevalence of images of women of color dating white women feeds a fear that queer relationships are only viable or valuable when at least one partner is white. I consider it a win whenever a Black woman, or any woman of color, finds herself in a loving and/or healthy relationship of any kind. Haze and Baldwin appear to have a lovely dynamic, and I hardly believe that Black women should date only Black women out of some obligation to visibility efforts. But, from the conversations I have been having, it appears that many of us Black women (and perhaps, more generally, women of color) are starving to see healthy and happy depictions of our love for each other.

Angel Haze and Ireland Baldwin being all cute and shit

Two years after I first began my coming out journey, I’m still not quite sure how to love the women who look like me. I don’t blame women like Haze, Wanda Sykes, or Robin Roberts for finding companionship in white women. Likewise, I don’t believe Raven Symone and Brittney Griner are better people for having been in relationships with other Black women; however, they do provide public models for young, queer Black women like me that Black women are not society’s untouchables, or unable to grasp on to one another in love and intimacy. But beyond appreciating the celebrities who do engage in partnerships with other Black women, the problem remains that the media doesn’t create images of Black women in love. Why is it so hard to find images of these Black women who cling to me and to each other in times of trouble, who stan so hard for one another’s uplift and success, and who see paradise in the dark bodies the rest of the world deems a battleground, in happy relationships?

I started watching web series like Between Women and Studville TV when I realized that one of the hardest parts about accepting my sexual orientation was that I literally did not believe that Black women were lesbians, bisexuals, pansexuals, asexuals or queer. These web series offered me a chance to see a community I could theoretically belong to (and not just because I shipped myself with the cast of the shows). At the same time, however, these shows provided me with some of the most dangerous models of relationships. The series uncritically demonized studs and masculine of center women as violent, misogynistic, and physically/emotionally abusive, in the case of Between Women, and vilified femmes and feminine of center women as “crazy,” manipulative, and physically/emotionally abusive, in the case of Studville TV. And, neither show really imagined Black female, romantic relationships outside of the stud-femme dichotomy (for the majority of the couples presented). As I hungrily perused and consumed queer Black female web series (forget about even finding many shows about queer Black women on cable television), I found these stereotypes duplicated and reproduced en masse. Furthermore, in the few cable television depictions, healthy representations of Black women in love included the L Word’s biracial Bette in love with a white woman, Glee’s afro-Latina Santana in love with a white woman (and eventually a white Latina woman), and The Foster’s biracial Lena in love with… a white woman. So, the media — even media produced by queer Black women — pathologizes queer, Black, female couples or casts us as happiest with white or white-passing women. 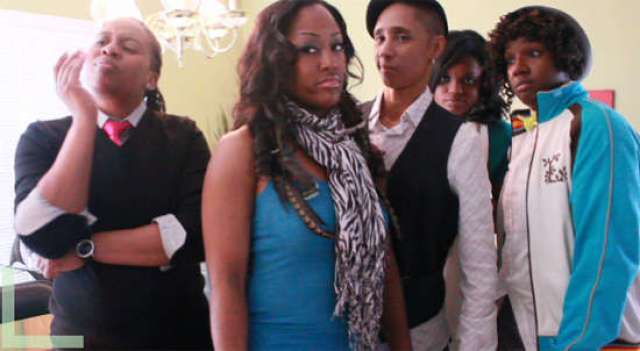 Writer bell hooks explains in We Real Cool the lack of Black love represented in the media and even in the way our society conceptualizes love. She clarifies:

“We do not commonly hear about the black males and females who love each other. We do not hear how they manage to find their way to love when the odds are so stacked against them. We do not hear the ways they establish functional caring black families. The collective silence in our culture about healthy black male and female relationships damages us. It keeps our minds and hearts fixed on all that is not working. It keeps from us the knowledge of what we must do to make relationships work.”

Similarly, we do not hear often about the Black women who find one another in love and tenderness, who build home and families together, or who at least engage in respectful, caring relationships with one another. People should love who they love, and in no way am I policing or condemning interracial relationships. However, I want to see Black possibility. I want to see stories of Black women with happy endings that entwine with my own realities and fantasies. I want to see us Black women no longer the Unmentionables or Untouchables, unafraid of the power and beauty of us loving one another.