A Michigan woman married her partner on March 22, the only day courts performed marriages between when a federal court struck Michigan’s down marriage ban and when a judge stayed the ruling. She and her partner made the news as they celebrated their union on the momentous day.

Nine days later, three men attacked the woman at a bus stop. They hollered slurs and asked if she was the one they had seen on TV. The attack left her with swelling and bruising on her arm, torso and face, CNN reports. The Washtenaw County Sheriff’s Office continues to look for the men who attacked her. She has asked to remain anonymous. 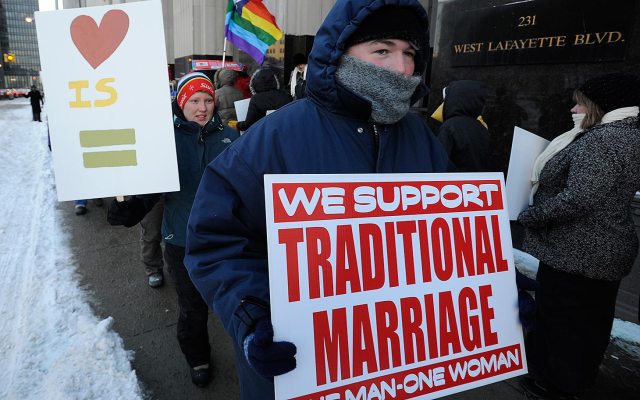 Her marriage, like those of the more than 300 gay and lesbian couples who wed that day, will be recognized by federal law. Michigan is one of five states with marriage equality rulings currently tied up in federal courts, along with Texas, Virginia, Utah and Oklahoma. It’s also one of 18 states where an attack like the one this woman experienced wouldn’t qualify for hate crimes status because hate crimes laws don’t include sexual orientation. Twenty-two states don’t include gender identity in hate crime statutes. And statewide LGBT rights efforts have largely moved on from pushing for hate crimes legislation at the state level since it became part of federal law in 2009. But federal law without corresponding state law often leaves local law enforcement impotent, and federal investigators simply can’t take on every relevant case.

Expanding hate crimes protections may not be the answer. Studies have found that the harsher sentences for hate crimes do not necessarily prevent violence against minority groups. Plus, given the current state of the prison industrial complex, putting more people in prison for a longer time is more likely to increase systemic violence than reduce it.

But when something like this happens, when a woman is brutally attacked by strangers because they saw her committing to love with another woman, politicians and society must recognize that attacking a queer person for being queer is different than mugging a random person with a nice backpack. Public opinion is shifting rapidly to favor expanded rights and protections for queer people, and many advocates are hanging up their boxing gloves. This case serves as a reminder that many people still deeply hate queer people. There must be legal, structural and educational efforts to address and eliminate that hate.

The attack of this woman just nine days after she made her girlfriend her wife in the eyes of the law brings into sharp relief the problem with the LGBT movement focusing so intensely on marriage. Groups like the Human Rights Campaign and American Civil Liberties Union have spent tens of millions of dollars working for marriage equality. The progress shown when 300 Michigan couples married on March 22 is marred by the fact that the majority of LGBT people can still be kicked out housing, fired from jobs, harassed in public, and abused by their partners with limited legal recourse. For example, more than half of LGBT Americans live in a state where it is not illegal to discriminate against someone for employment based on their sexual or gender identity. Only 23% of LGBT Americans live in a state with laws that support their right to adopt and foster children. Equality Michigan notes that Michigan is behind many other states on expanding legal protections for LGBT people:

In Michigan today it is perfectly legal to fire, refuse to hire, or refuse to promote someone — because an employer thinks they are lesbian, gay, bisexual or transgender. There are numerous documented incidents of individuals being fired for this reason, regardless of job performance. Once fired, these individuals are left with no legal recourse.

It’s also legal to deny LGBT people rental housing or to refuse to serve them in stores, restaurants, and other public accommodations. As is the case with job discrimination, LGBT individuals are offered no protection under state law, and thus have few options when facing discriminatory practices in housing or services.

Marriage equality is on its way to being a given, but that won’t improve life for many queer people, just as it didn’t protect this woman from violence. It will take local, state and national efforts to reduce attacks like this one and meaningfully improve the quality of life, safety and opportunities for LGBT Americans.