Is love a lie? Great question! We like to joke about it, because nihilism is one (1) free and legal coping mechanism that’s available to us all at any given time of the day and night, but what do we really think? Today we’re attempting to find an answer, once and for all, for the record and for the good of the people. On which side of this proverbial and eternal fence will we land? Keep reading to find out!

It would be a lot easier to believe that love is real if very famous queer women weren’t constantly cheating on and breaking up with each other and then dating each other’s exes who they also cheat on and break up with! There are four million people in Los Angeles and eight million people in New York City, the only two places famous queer women live, and yet they’re still out here very publicly destroying each other like it’s that town from Footloose and there’s only six people, total, to make out with. They’re Shane-ing around town when they know everyone’s taking photos of them! They’re Shane-ing around town when they know their insta DMs are gonna get leaked! It’s like they cannot help themselves!

Anyway, love is always a lie and here’s a timeline of Vapid Fluff heartbreak to prove it. 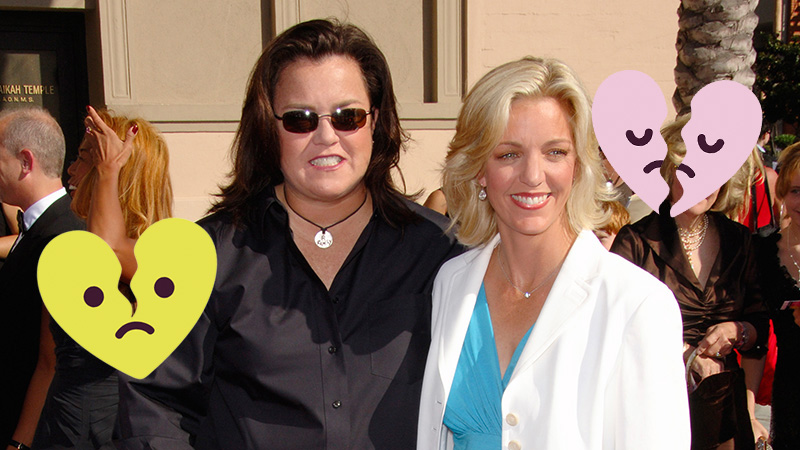 Rosie and Kelli were together and out when hardly anyone was together and out, and then one day, out of the blue clear sky, Rosie said in an interview, “Oh, Kelli? Yeah, she moved out two years ago.” We were believing in their love for SEVERAL YEARS in which they HADN’T EVEN SPOKEN. 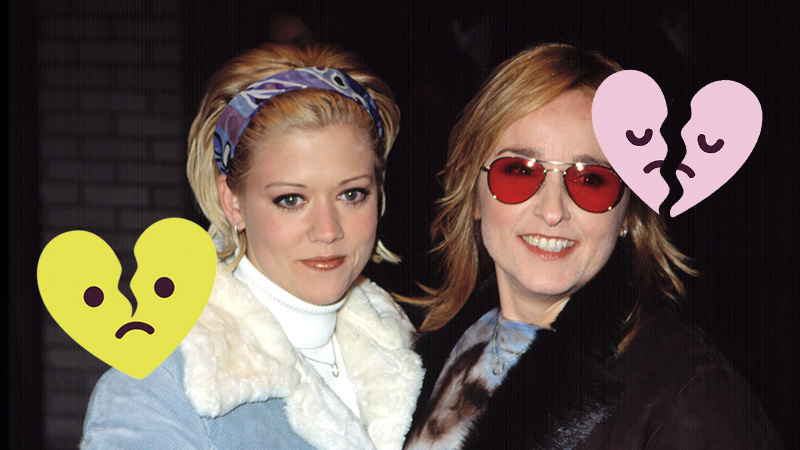 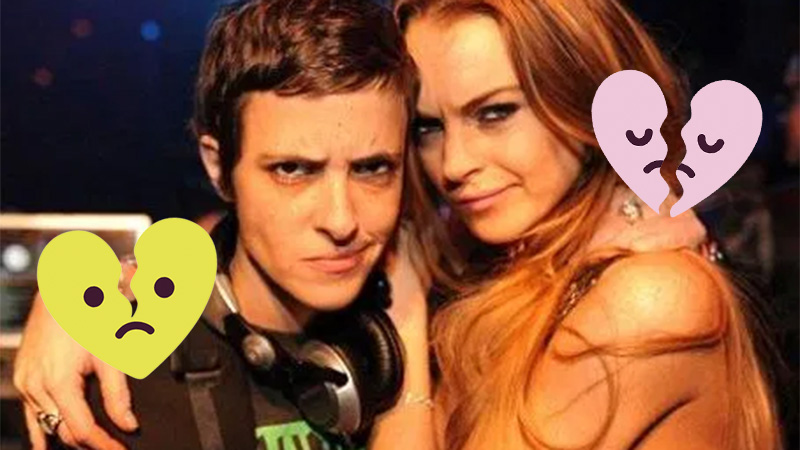 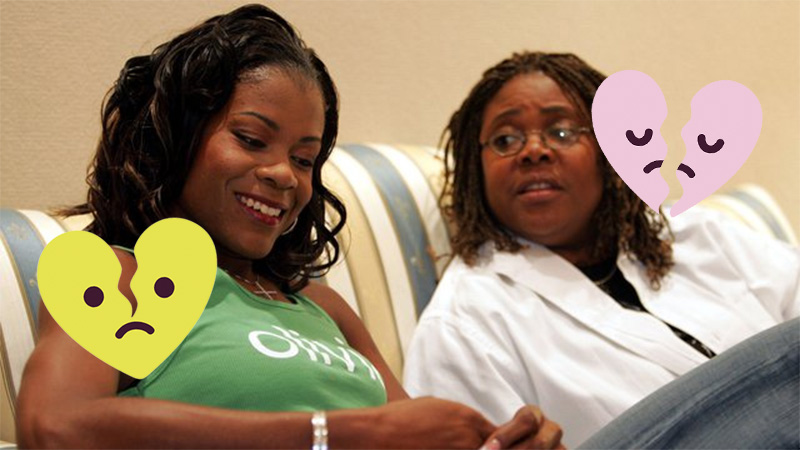 We were always finding out everything about this relationship months or years after it happened. Like by the time we were finally celebrating it, they’d been broken up and women’s basketball legend Sheryl Swoopes was already married to someone else. 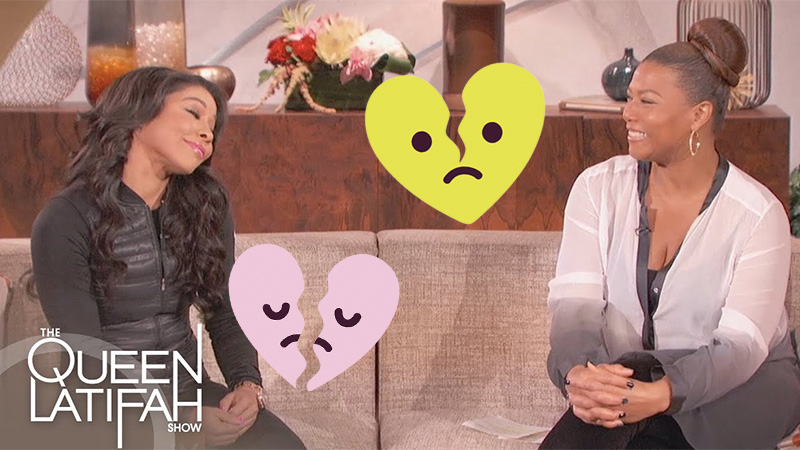 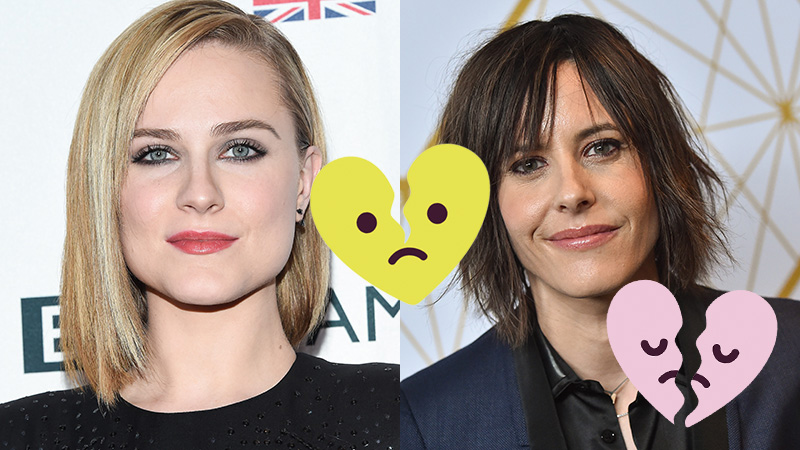 These two apparently met on Twitter and started up a thing and were only ever photographed together one time? Honestly for the best — as The Cure taught us, it’s better not to have pictures of your exes lying around because it feels like the DEATH OF YOUR HEART. 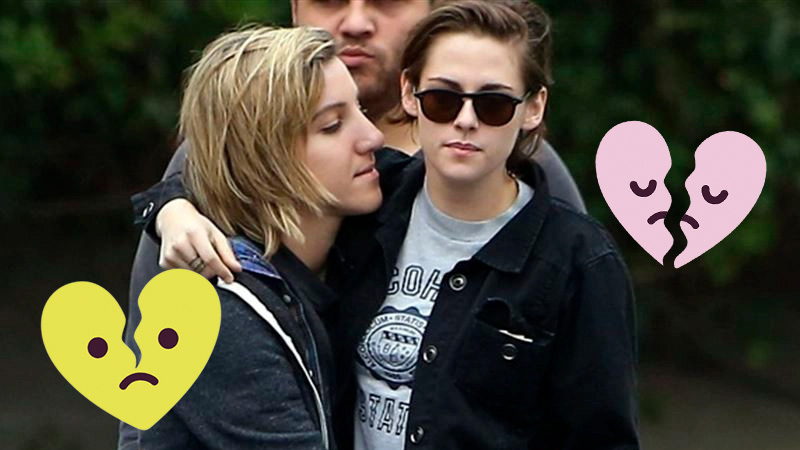 Not only did Alicia Cargile presumably make Kristen Stewart gay — and don’t get us wrong, we are forever thankful — she also one time carried Kristen’s Vans on the red carpet at Cannes so she didn’t have to wear her Christian Louboutin heels around all night! Everything dies. 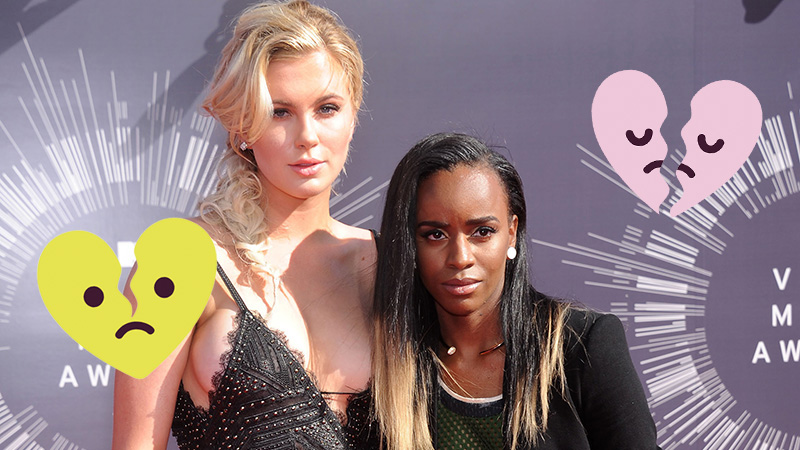 They were so public and adorable with their love! And just when we started to wonder if, perhaps, this time it was real, Angel Haze tweeted: “lol at my life, break up with someone right after you put out a love song about them, looool gonna go cry forever.” US TOO ANGEL. 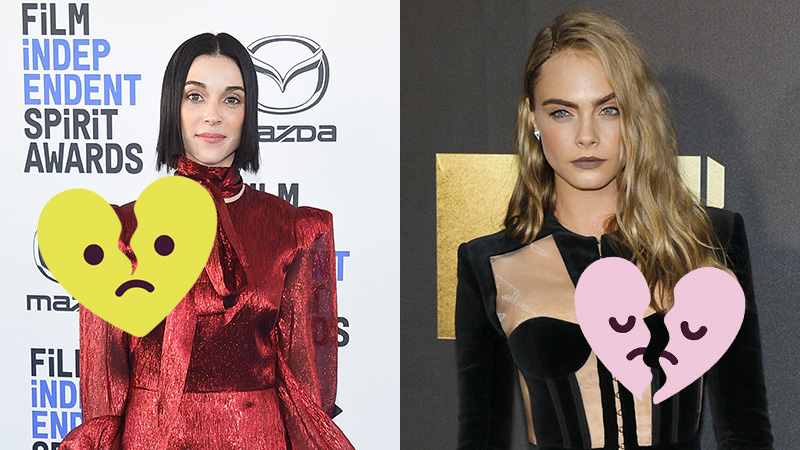 Cara was, according to St. Vincent’s “New York,” the only motherfucker in the city who could handle her. Alas. 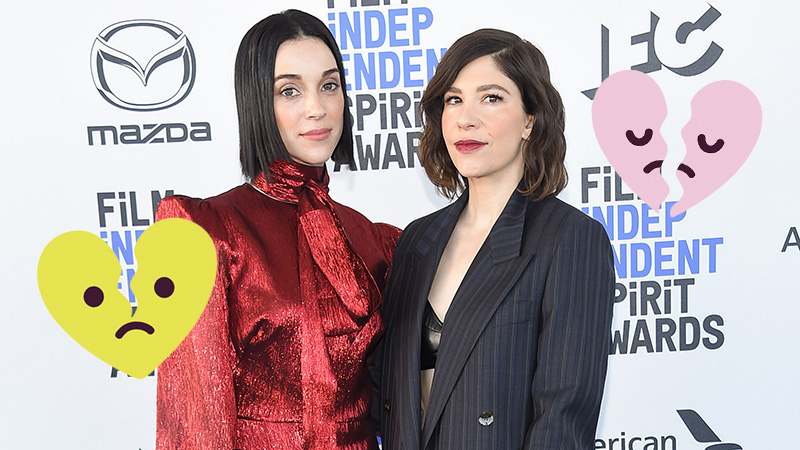 There has honestly never been a couple that makes more sense than these two. Unfortunately, apparently, Brownstein was not a motherfucker who could handle Annie Clark. They’re still friends though! Which is probably because Brownstein breaks the rules and lives in Portland and it’s like the law in Portland that all queers have to be best friends with their exes and invite them to all holiday gatherings for life. 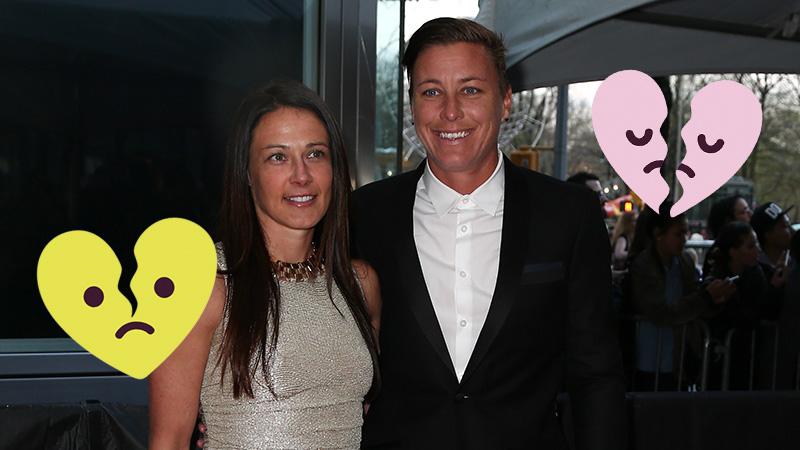 Woof. This was a rough one. They were teammates! And they smooched in their uniforms in front of a bazillion people! It made the One Million Moms go BERSERK. Again: alas. 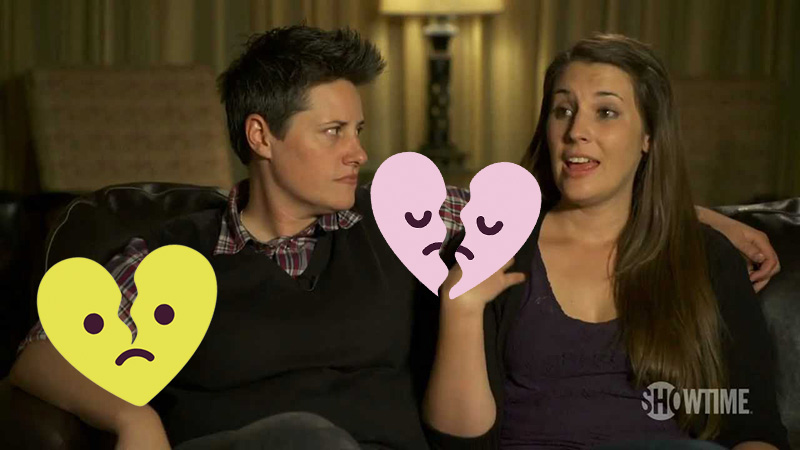 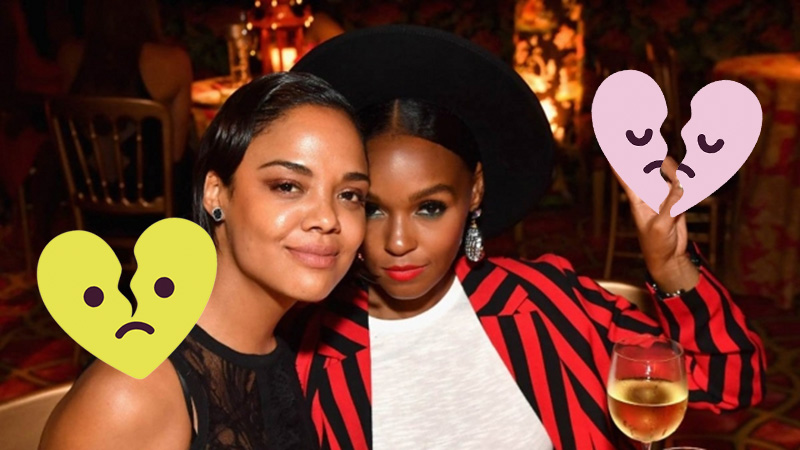 We’re still not ready to talk about this one. 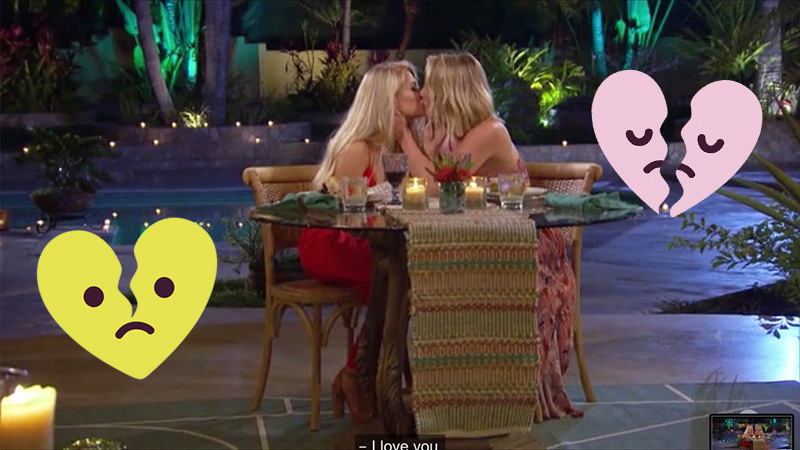 These two did not fall for the Bachelor in Paradise! They fell for each other in Paradise! And then they got home and realized the real world was not Paradise and they were not made for each other in the real world — but they still had to do a bunch of press for the show about how they were the first queer women in Bachelor history! Or, as John Milton said in Paradise Lost: Me miserable! Which way shall I fly! Infinite wrath and infinite despair! 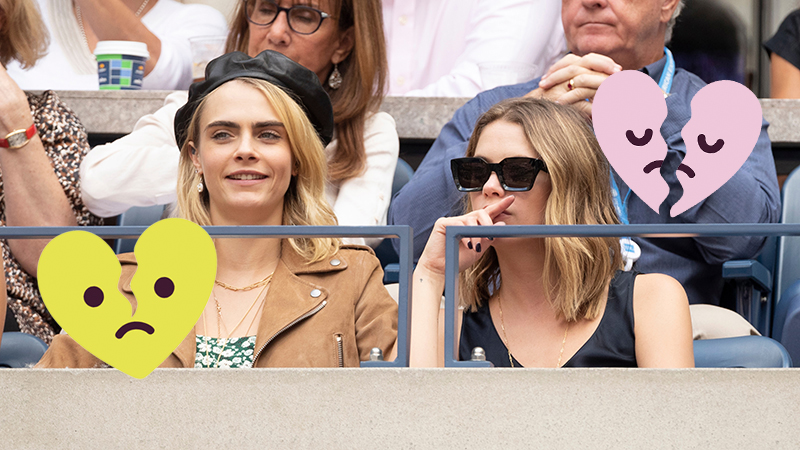 How many orphaned sex benches line the streets of Hollywood? HOW MANY. 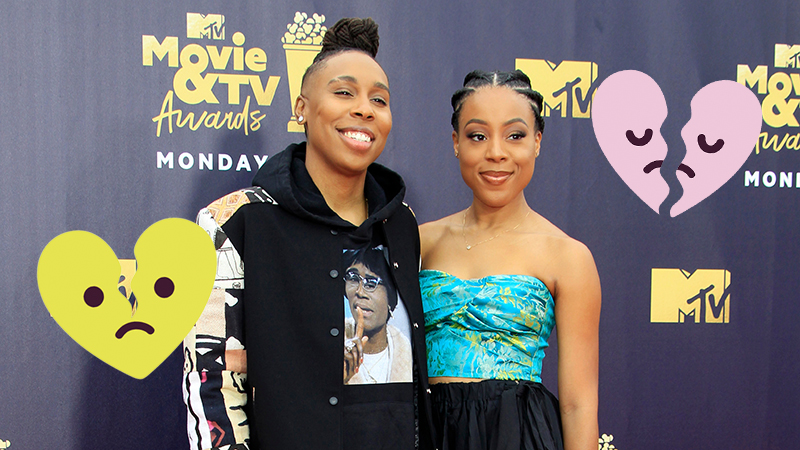 Their love story was so sweet and swoony and then Lena apparently cheated on Instagram and  is now making a feature film for the woman she cheated with? Team Autostraddle fully believes Mayo, a very successful producer, is going to end up making a movie about this mess and we will obviously all be lined up to see it to continue to find comfort in our shared belief that love is garbage.

Join A+
Related:love is a lie